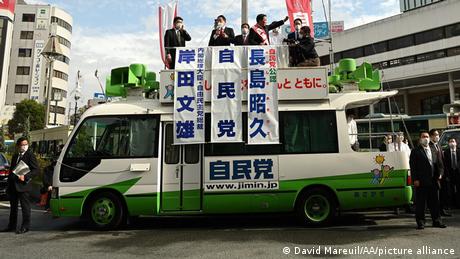 Japan goes to the polls for parliamentary elections on Sunday, just weeks after Fumio Kishida became prime minister and with significant challenges at home and abroad in the forefront of the electorate's minds.

Opinion polls in the run-up to the election for Japan's powerful House of Representatives suggest that the ruling Liberal Democratic Party (LDP) could lose some seats in the 465-seat lower chamber of the Diet.

However, the LDP will almost certainly be able to retain the reins of government thanks to its electoral alliance with Komeito, a Buddhist-backed minority party.

The LDP presently holds 276 seats, with the left-leaning Asahi newspaper predicting in its final opinion poll before voting day that it could lose as many as 25 seats. Komeito has 29 seats at present and could lose four. That would still see the alliance as comfortably the largest in the house and enable it to form a government with Kishida at the helm.

In the ruling coalition's favor is the fractured nature of the opposition parties, although a number have agreed to unite in this election and will not run competing candidates in dozens of constituencies in an attempt to challenge the LDP.

The Constitutional Democratic Party is the largest single opposition party, with 109 seats going into the election, with the Japanese Communist Party at 12 seats and Nippon Ishi at 11, with four other minor parties and independent politicians making up the numbers.

"The resulting 'absolute stable majority' will guarantee the ruling coalition a majority on all parliamentary standing committees and the chair of those committees," he said in a press release on the election.

"Internal ideological and policy dissonance within [the opposition's] voter base and lingering public concern" over its "policy competence" will prevent a strong challenge to Kishida's prime ministership.

The business world would be happy with that outcome, said Naoya Oshikubo, senior economist at Sumitomo Mitsui Trust Asset Management.

"With no strong opposition party in Japan, the LDP is set to breeze past the victory line in the election," he said in a company press release. "This is what the market expects and it will be the most positive outcome for the Japanese economy."

Businesses are banking on a continuation of the policies of the last two prime ministers, Yoshihide Suga and Shinzo Abe, including a monetary policy of large-scale easing and growth strategies such as digitization and decarbonization will "remain priorities."

He is also expected to roll out further financial assistance to businesses and households that have been hit hard by the coronavirus pandemic.

Hiromi Murakami, a professor of political science at the Tokyo campus of Temple University, says the worst of the pandemic appears to have passed in Japan and that ordinary voters are now most concerned about getting the economy firing on all cylinders.

"As a voter, I'm hoping that promises of assistance to businesses and households that have been struggling are going to be kept and that the policies of the new government lead to a visible improvement in the national economy," she told DW.

"And while I expect the LDP to win, I hope it is not too easy for them as it would be good to have an opposition to make them keep their promises, on things such as political reform."

Away from purely domestic issues, Murakami said Japanese people are concerned about the worsening security environment in northeast Asia and how that might impact their lives in the years to come.

“For me, personally, the biggest worry has to be North Korea, which has recently launched a series of ballistic missiles, has nuclear weapons and is completely unpredictable,” she said.

"Some of those missiles have landed in Japanese territorial waters and they don't seem to care or listen to the criticisms of the international community."

"Among ordinary people, there is also a growing awareness of Taiwan coming under growing pressure from China and becoming something of a flashpoint in the region, while Beijing is also claiming some Japanese islands in the East China Sea, which is worrying," she said.

Kishida, a former foreign minister under Prime Minister Abe, was quick to identify the threat posed by an aggressive and expansionist China as the biggest danger to Japan immediately after he became leader in late September.

On the day that he announced the dissolution of the Diet for the election, he emphasized the importance of the Japan-US security alliance, insisting, "The upcoming election is about the choosing the future of Japan."

Something of a dove before taking over, Kishida is expected to continue previous administrations' hard line on China, particularly on the question of Japanese sovereignty over the Senkaku Islands, which Beijing claims, the disputed islands in the South China Sea and, perhaps most significantly, Taiwan.

A key element of that policy has been enhancing existing security and economic alliances, such as with the US and the nations of Southeast Asia, and developing new connections with countries further afield.

That deepening of Japan’s alliances has not gone unnoticed in Beijing. Earlier this month, a fleet of five Chinese warships carried out a series of joint maneuvers with Russian warships in the Sea of Japan before taking the unprecedented step of traversing the Tsugaru Strait, between Japan’s main island of Honshu and the northern prefecture of Hokkaido.

The fleet then sailed down the east coast of Japan and back into the East China Sea via another narrow strait between Japanese islands to the far south of the archipelago.

The fleet did not enter Japanese waters and Beijing and Moscow have both insisted that the vessels were merely exercising their right to free passage through international waters.

However, the timing of the exercise and the fact that it is the first time the two countries have cooperated on such manuevers is widely being interpreted as warning to Japan.