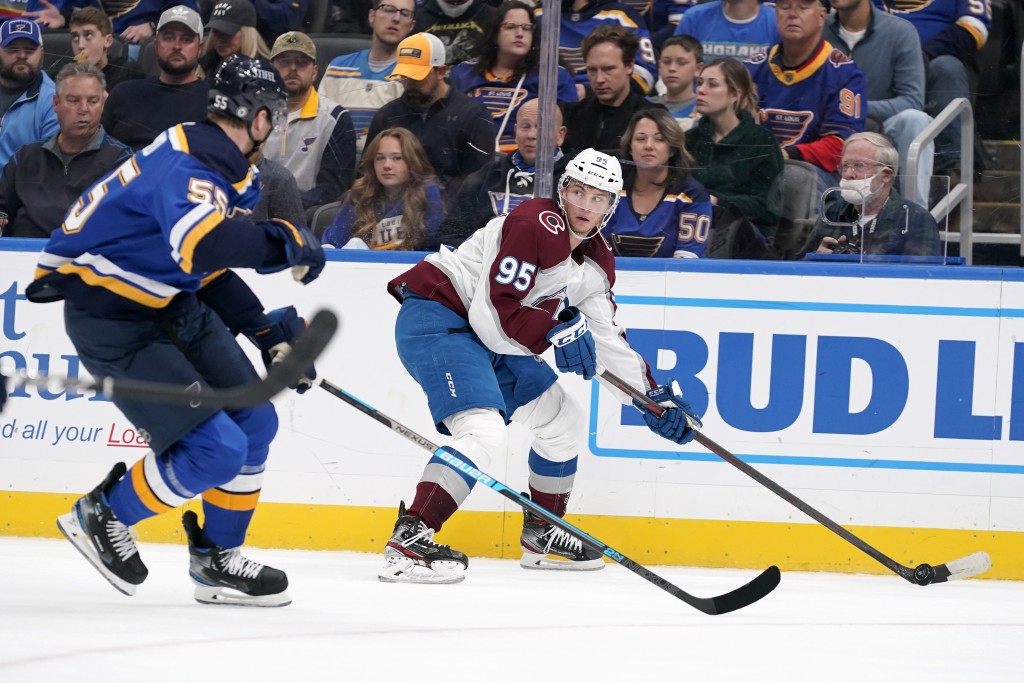 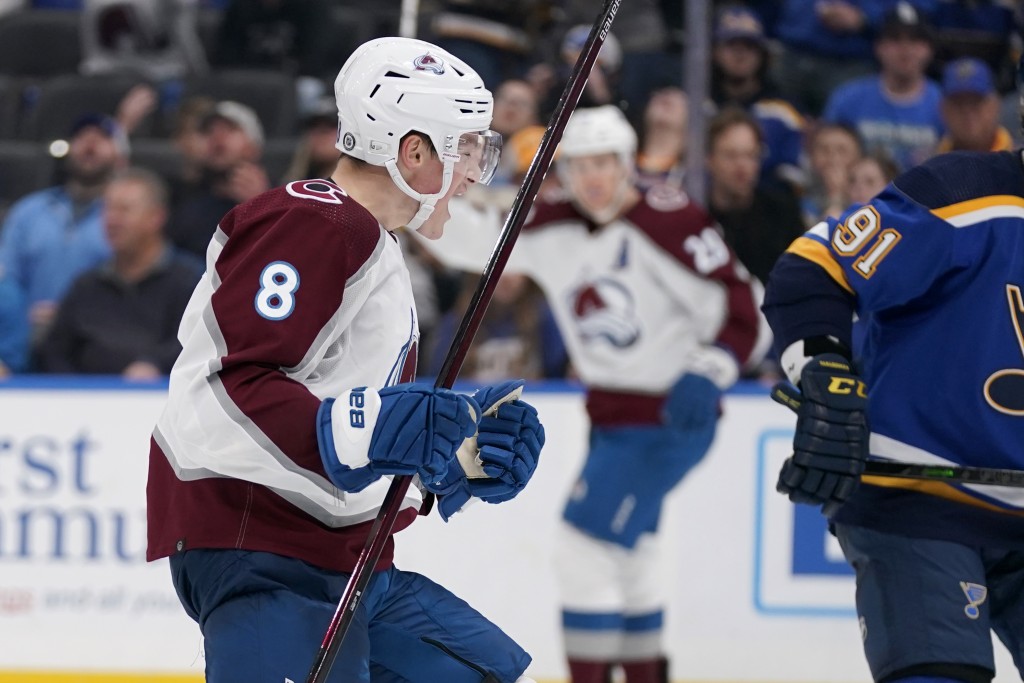 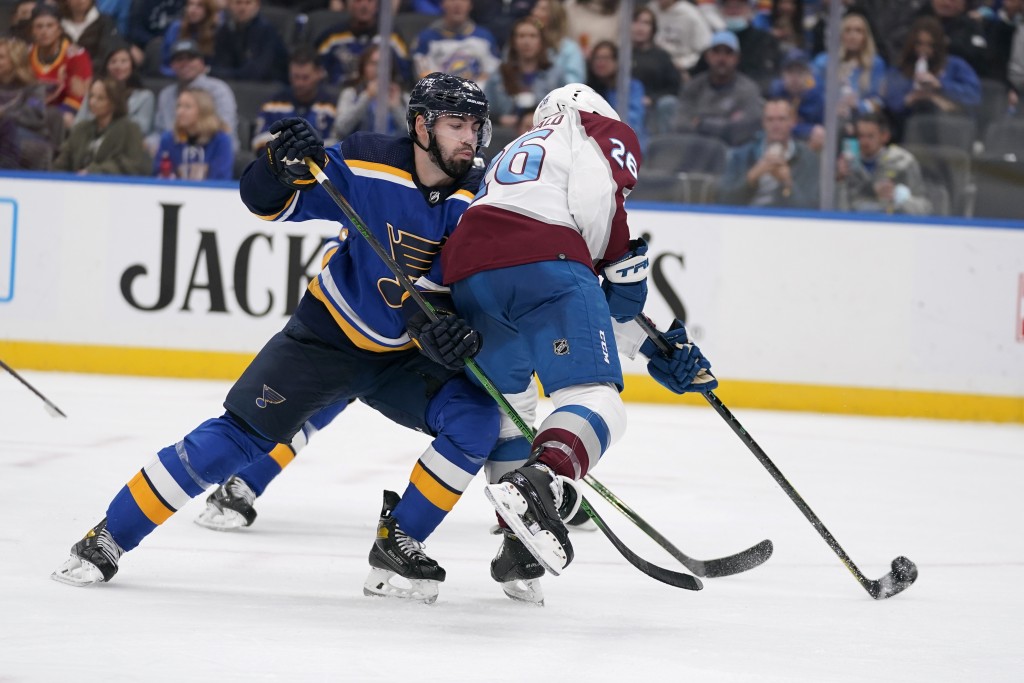 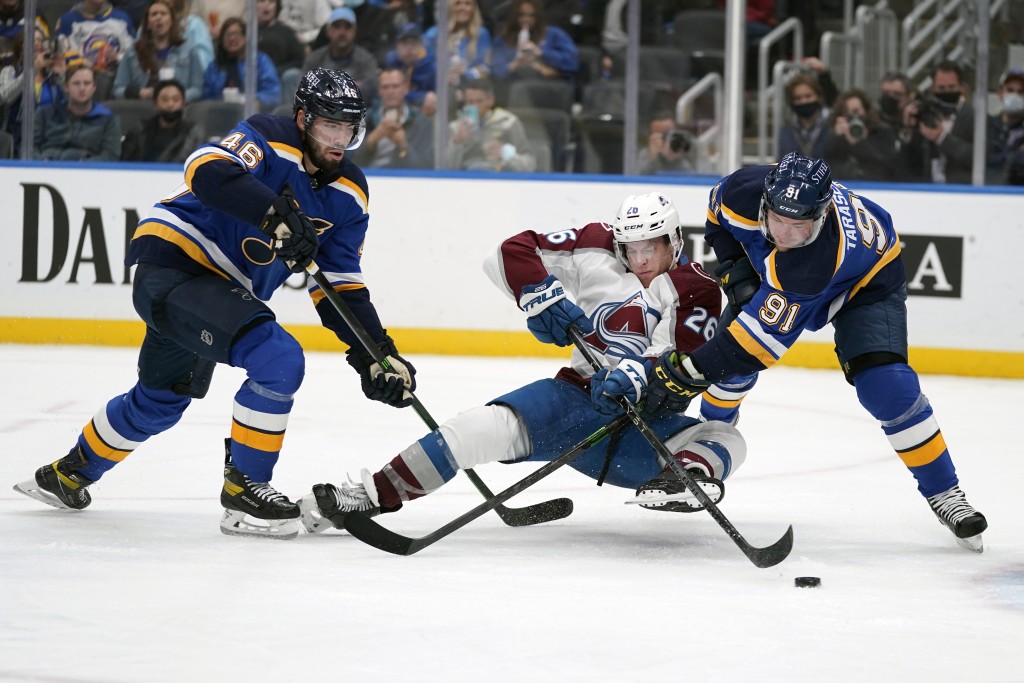 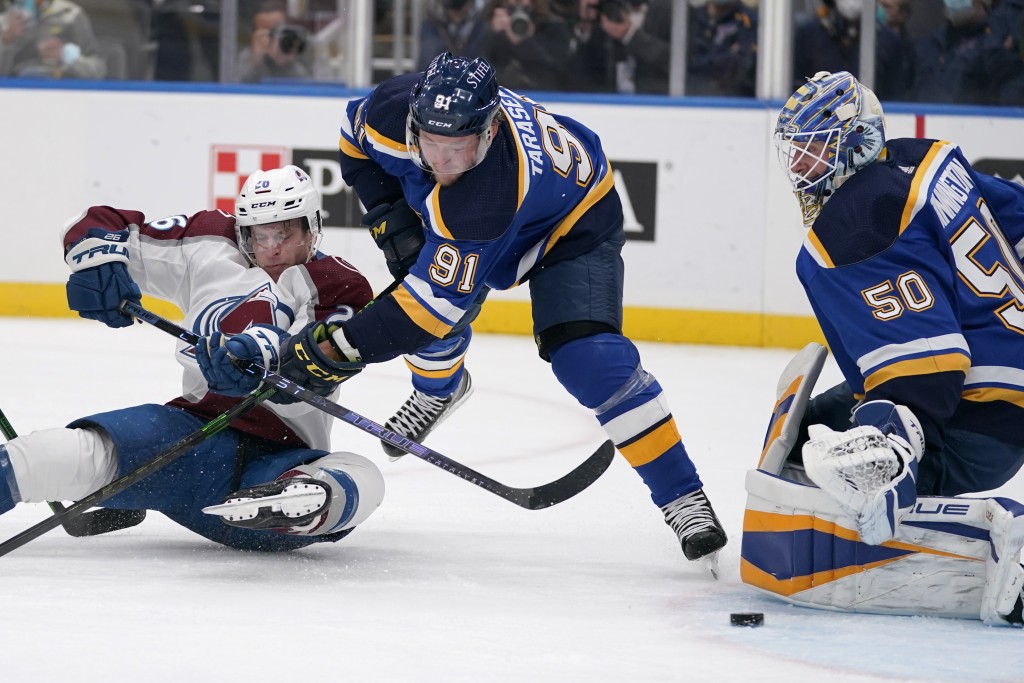 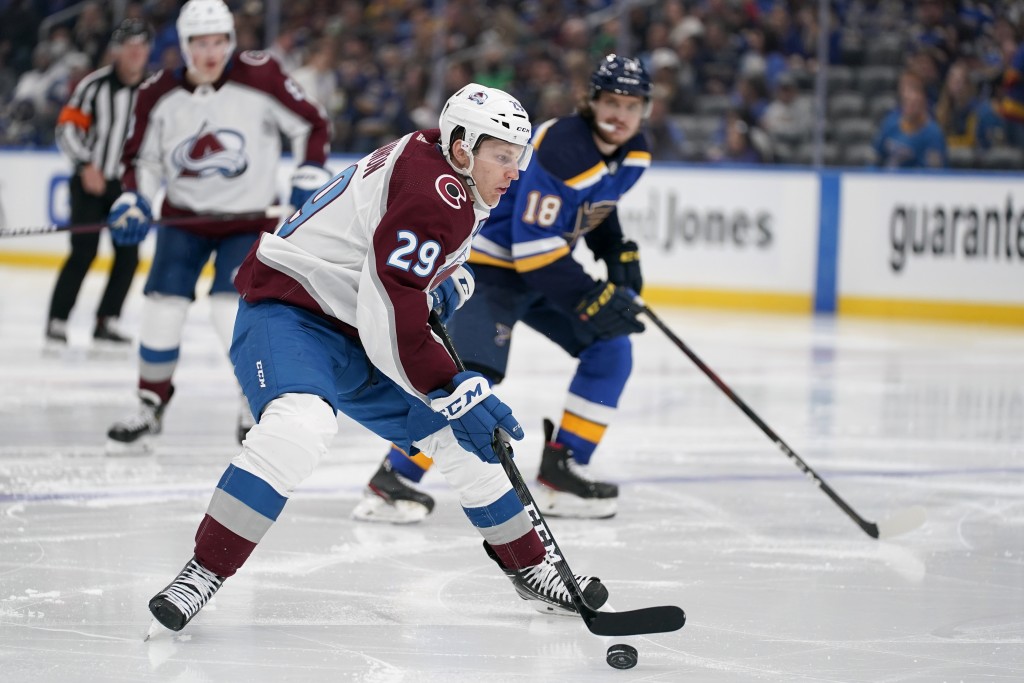 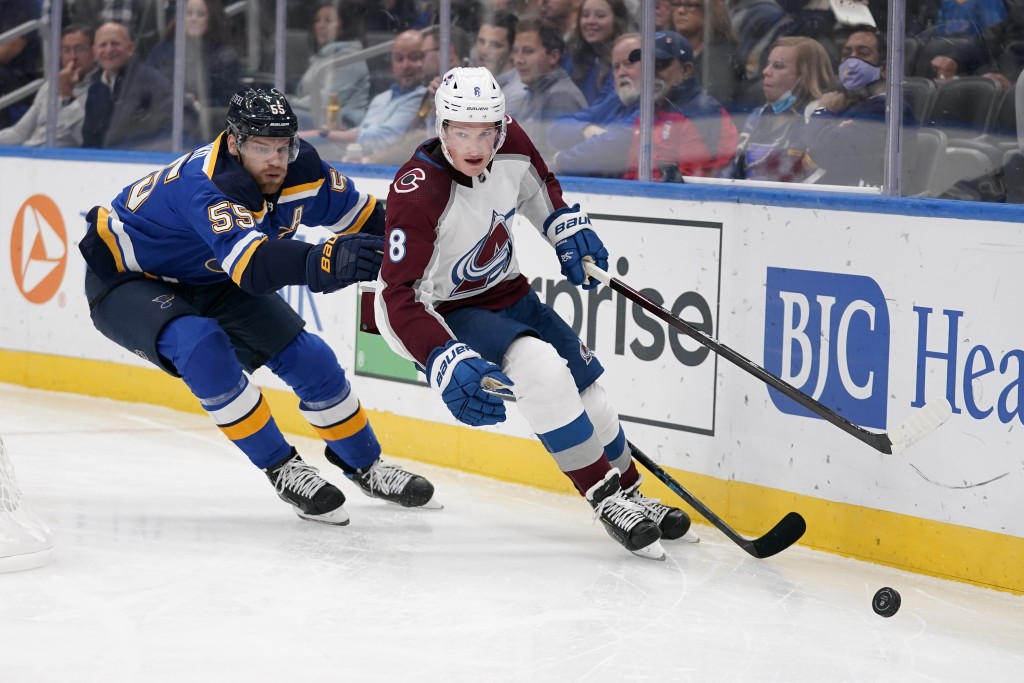 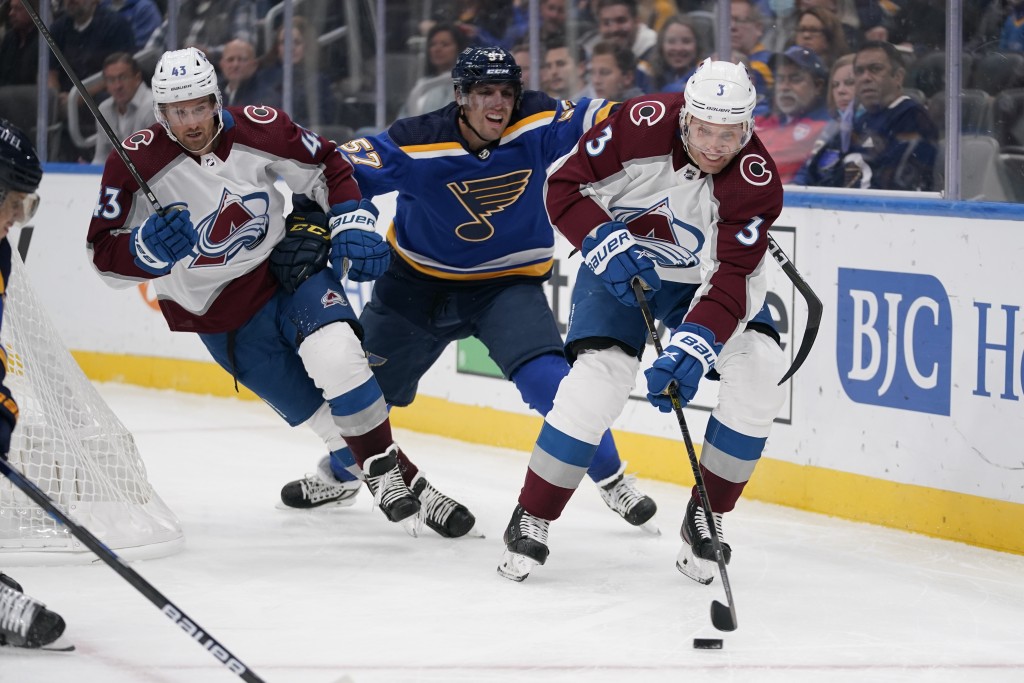 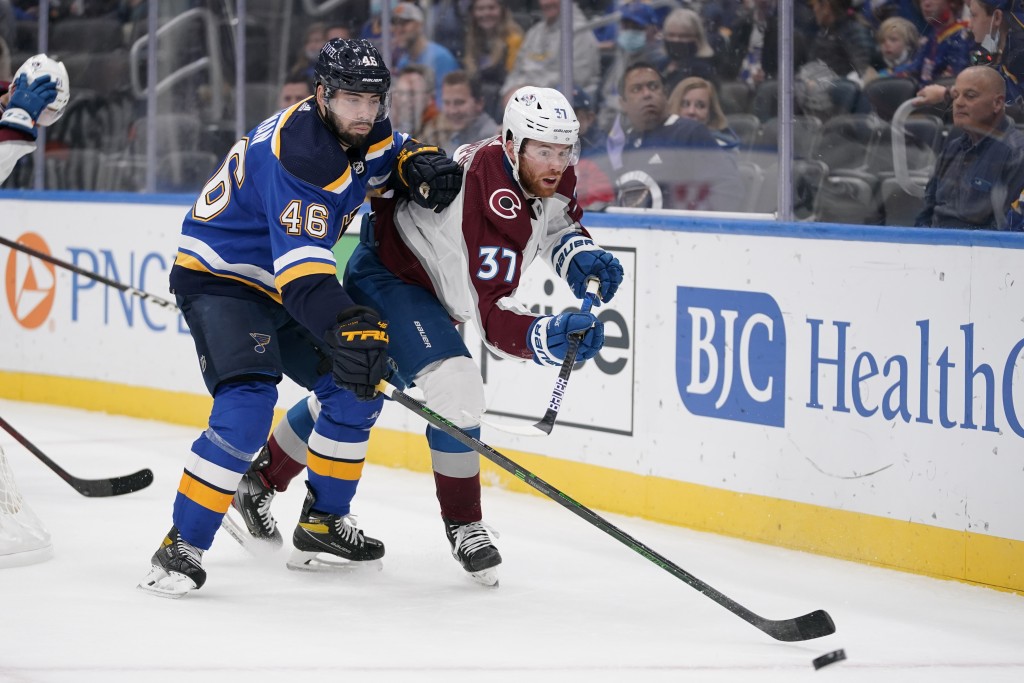 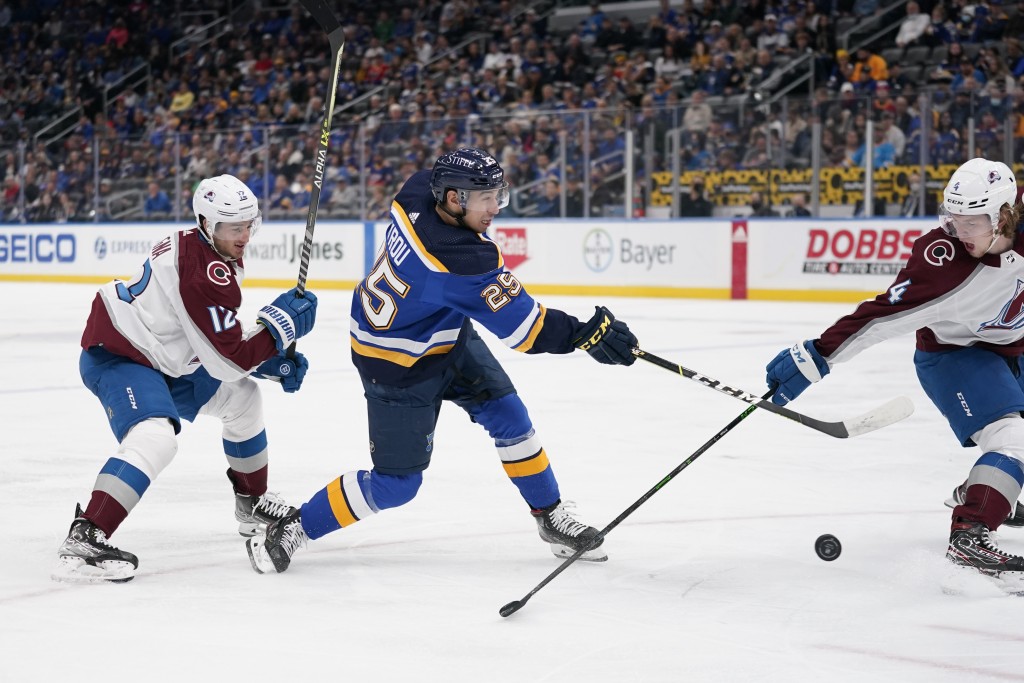 ST. LOUIS (AP) — J.T. Compher scored two goals, leading the Colorado Avalanche to a 4-3 victory over St. Louis on Thursday and handing the Blues their first loss this season.

Vladimir Tarasenko, Brayden Schenn and Colton Parayko scored for St. Louis. Blues goalie Jordan Binnington stopped 38 shots, and also was given a rare 10-minute misconduct near the end of the second period along with Kadri for a scrum after the net was knocked off its moorings.

St. Louis coach Craig Berube said he was not upset with Binnington.

Colorado rookie Sampo Ranta appeared to score his first NHL goal at 2:54 of the first period but the Blues challenged the play and officials called it off because the Avalanche were offside.

The first goal actually came at 9:21 in the first. Parayko scored his first goal this season, which was a slapshot from the right point that squirted through Kuemper’s pads.

Colorado tied it on a goal by Compher with about two minutes left in the period. From the inside the blue line, Ryan Murray shot and Compher used his stick to deflect the puck into the net.

“It doesn’t have to be pretty," Compher said. "Just get it done.”

“That was good. We’re not clicking right like we’d like on the power play,” Compher said. “It was good to step up in an important part of the game. We’re still working through things. When our power play is clicking, it’s huge for our team.”

Kadri used a wrist shot from the faceoff circle about three minutes later to give Colorado a two-goal lead.

“You always want to have an impact on the game and be on the scoresheet,” Kadri said. “It’s important to step up and supply some offense. I don’t think we let off the gas throughout the whole game. They pushed back a couple of times with some timely goals but we responded well. That’s good to see from a mature group. ”

The Avalanche outshot St. Louis 14-5 in the first period and 30-12 after two periods.

“I think first off we played fast and kept the pressure on them forecheck-wise,” Compher said. “We were physical and made them make plays under pressure.”

St. Louis cut the lead to 3-2 when Schenn scored from the side of the goal at 4:13 of the third period, but Colorado quickly got the goal back when Makar scored at 4:51.

“It’s obviously difficult.” Parayko said. “That was a good goal by Schenner and gave us a little momentum. I think that’s where on us we’ve got to continue to bring that momentum and stick with momentum. Obviously when they get one, it kind of brings it down a little bit.”

Tarasenko scored his fourth goal this season at 16:01. He also assisted on Parayko’s goal to give him eight points in a five-game point streak (four goals, four assists).

St. Louis dropped to 5-1. Colorado, losers of four of its previous five games, improved to 3-4.

The Blues topped the Avalanche in their season opener. These two clubs met 12 times last year, with Colorado winning nine of those games — including a four-game sweep in the playoffs. The Blues were outscored by the Avalanche 46-26 last season (including the playoffs).

“It’s a big rivalry, Colorado,” Berube said. "They’re a very good team, they’re hard to play against and if we want to consistently beat them and compete with them, we have to play for 60 minutes and we only played for 20 tonight.”

The Blues have placed team captain and faceoff specialist Ryan O’Reilly and Brandon Saad, who played with the Avalanche last season, on the team’s non-roster COVID-protocols list. They'll miss at least 10 days — meaning O’Reilly will miss the next four games and return Nov. 7 at Anaheim. O’Reilly has scores two goals and three assists through five games, and has scored a point in each game. This is the first time since O’Reilly arrived in St. Louis in the summer of 2018 that he will miss a game, ending his streak of 214 regular-season games (plus playoffs). Saad, who went on the COVID list Oct. 21, will miss the next two games at a minimum, returning Nov. 3 at Los Angeles.

The Blues have recalled 6-foot-3 forward Dakota Joshua from AHL affiliate Springfield Thunderbirds. The 25-year-old has appeared in five games with Springfield this season, logging one assist and six penalty minutes. The 206-pound forward dressed in 12 games with the Blues last season, collecting one goal and seven penalty minutes.

Colorado RW Mikko Rantanen, who had scored a goal in all three road games so far this year, left the morning skate before it was finished. Rantanen was scratched before the start of the game. “Lower body injury. He’s day to day,” Bednar said. ... Avalanche D Samuel Girard (upper body) did not travel with the team to St. Louis. ... Colorado D Devon Toews (undisclosed) traveled to St. Louis to participate in Thursday’s morning skate but did not play. ... St. Louis Cardinals outfielder Dylan Carlson watched the game from the stands.