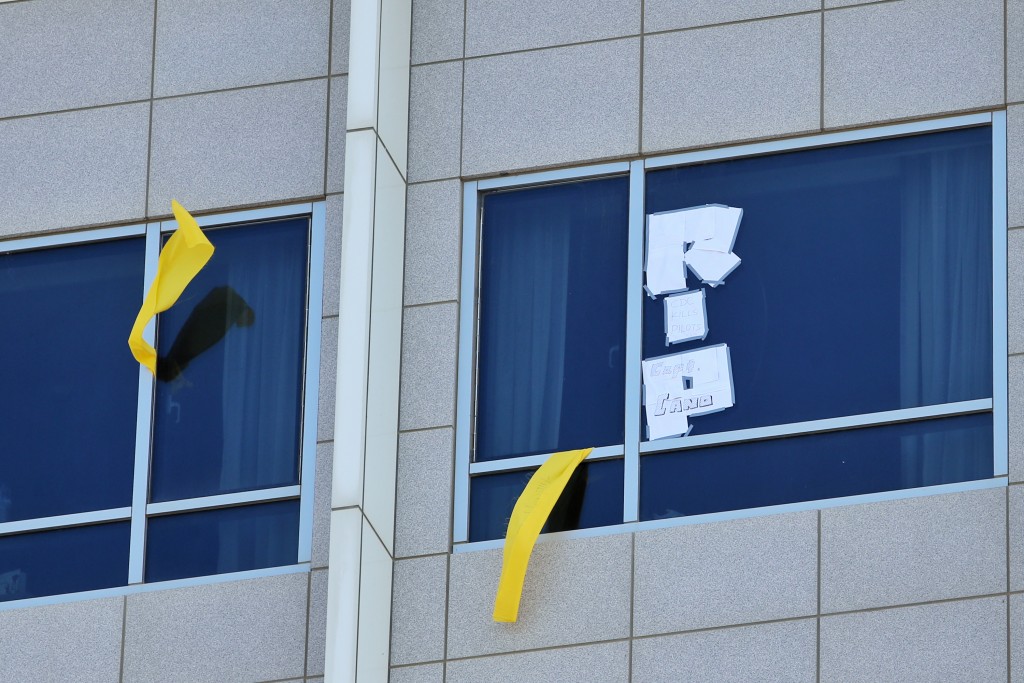 TAIPEI (Taiwan News) — Dissatisfied with the official response to its demands, over 300 flight crew members at three quarantine hotels hung up yellow ribbons to pay respects to the pilot who recently passed away due to stress and to send a “distress signal” to the public.

Following the death of a Venezuelan pilot on Saturday (Oct. 23), the Pilots Union Taoyuan demanded that pilots should not be assigned to fly during their quarantine period to avoid cross-infection and that crew members get at least three days of free time a month.

However, when Central Epidemic Command Center (CECC) Spokesperson Chuang Jen-hsiang (莊仁祥) stumbled over his answer about the issue and failed to assure parties involved that conditions would be improved, the Pilots Union organized the yellow ribbon movement to highlight its members’ desperation.

“The 3,000 pilots in the country with the same experience and struggle feel the issue deeply. They actively expressed the wish to make a statement together through collective action!” the union wrote in a press release.

“Crew members across nationalities, airlines, and positions hung up yellow ribbons simultaneously outside their windows” at quarantine hotels, wrote the union. “Through today’s movement, the union hopes to pay the deepest respects to colleagues who have passed away, and at the same time send a clear ‘distress signal’ to authorities and society on behalf of flight crew staff in the country!” According to the union, over 300 crew members staying at three quarantine hotels responded to the event. It told CNA that when a hotel refused to deliver the yellow ribbons to crew members, they had to improvise and use white towels as substitutes.

Other crew members on duty will join by wearing yellow ribbons in the following days, per the union.

The union added that the one reported case of a pilot contracting COVID-19 shows the risks of assigning pilots to fly during quarantine periods, and it reiterated its demands, which have not changed since early September. On Wednesday (Oct. 27), the union published a pilot’s “hellish” schedule spanning a two-month period, which shows back-to-back cycles of long-distance flight duties, quarantine, and self-health management. The pilot enjoys no days of complete freedom within the 60-day period and gets to see his or her family for only three days in a 44-day period.

“The Pilot Union must stress that a schedule like this is certainly not an uncommon case, but the actual long-term struggle that domestic airline pilots generally face,” the union wrote. “How could this kind of condition, this kind of reality possibly be ‘acceptable’ for the Pilot Union and pilots?”