TAIPEI (Taiwan News) — Taiwan’s central government announced on Thursday (Oct. 28) the further relaxation of COVID-19 restrictions regarding eating on public transport and in cinemas, masking in karaoke bars, and the number of people allowed at gatherings.

Premier Su Tseng-chung (蘇貞昌) announced Thursday that effective Tuesday (Nov. 2), masking will no longer be required for singing at karaoke bars and eating on Taiwan Railway and Taiwan High Speed Rail trains will now be allowed, CNA reported. The premier also said that limits on the number of people allowed to gather together will also be lifted on Tuesday.

In addition to the relaxation announced by the premier, the Ministry of Transportation and Communications added that eating on long-distance and tour buses, domestic flights, and ships as well as in post offices across the country will also be allowed provided that social distancing can be maintained and other passengers are wearing masks, according to the report.

Cabinet Spokesman Lo Ping-cheng (羅秉成) said that the premier had made the decision to further ease COVID restrictions in order to allow society to return to normalcy as soon as possible. 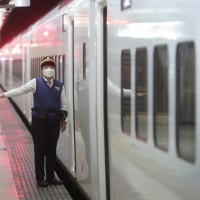