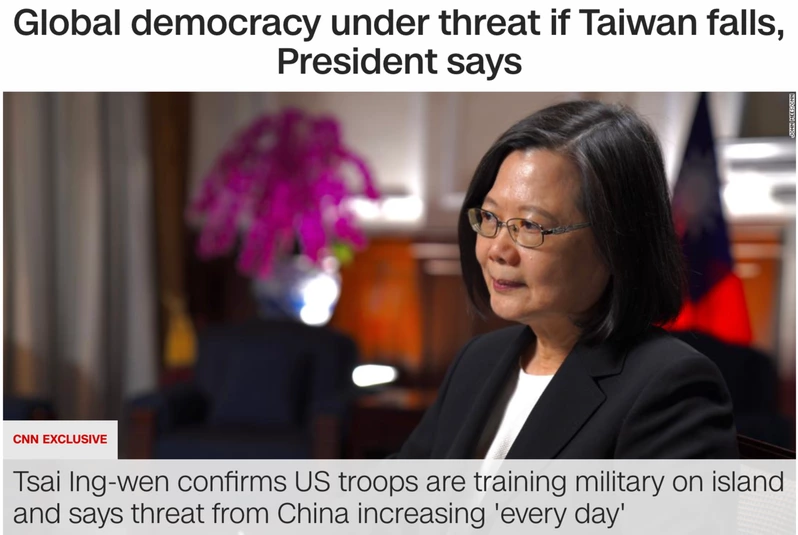 TAIPEI (Taiwan News) — In an interview released on Thursday (Oct. 28), Tsai Ing-wen (蔡英文) became the first Taiwanese president in 40 years to acknowledge that there are U.S. troops deployed in the country.

In an interview with CNN's Will Ripley, Tsai warned that the "threat from China is increasing every day" but emphasized that she would be willing to have direct talks with Chinese Chairman Xi Jinping (習近平) in which they could "sit down and talk about our differences." Tsai said the goal of such talks would be to have an arrangement in which the two countries could "co-exist peacefully."

Amid increasingly aggressive pressure tactics from Beijing since Tsai took office in 2016, she pointed out that "China's plan towards the region is very different." When Ripley asked if U.S. troops are on the ground training Taiwanese soldiers, Tsai said, "Well, yes. We have a wide range of cooperation with the U.S. aiming at increasing our defense capability."

Ripley then asked exactly how many American soldiers are currently stationed in Taiwan, and Tsai cryptically responded, "Not as many as people thought." He observed that the official number of U.S. troops deployed in Taiwan has risen from 18 in 2018 to 32 in 2021, according to U.S. Department of Defense records, with some of those service members possibly including the Marines dispatched to protect the American Institute in Taiwan (AIT).

During a town hall conference on Oct. 22, President Joe Biden said the U.S. has "a commitment" to defend Taiwan if China attacks, only for White House Press Secretary Jen Psaki to backtrack the next day to the standard U.S. stance of strategic ambiguity. When asked if she had faith that the U.S. would defend Taiwan if China attacked, Tsai said, "I do have faith given the long term relationship that we have with the U.S. and also the support of the people of the U.S. as well as the Congress, and the administration has been very helpful."

Tsai stressed the need to expedite Taiwan's military reforms to improve the country's ability to defend itself. She reasoned that given Taiwan's smaller military relative to China, the key is to develop its asymmetric warfare capabilities.

In response to a question on Taiwan's current state of readiness, Tsai said, "We are trying to make ourselves stronger in every aspect, including military capabilities and our international support." During lunch with Ripley, Tsai conceded that the current state of cross-strait tensions is the "most challenging time for Taiwan."

Tsai acknowledged she has observed alarming articles with headlines such as "The most dangerous place on Earth" but stressed that "We're not panicked. We're not anxious because we have gone through so many difficulties in the past." Ripley cited Tsai as saying that "Taiwan's future must be decided by its people."

On Oct. 1, China's National Day, a record 38 Chinese military aircraft violated Taiwan's ADIZ, though this was quickly surpassed by 39 more People's Liberation Army Air Force (PLAAF) planes the next day. An additional 16 PLAAF aircraft appeared on Oct. 3, and another record-shattering 56 planes breached the zone on Oct. 4, bringing the four-day total to 149 warplanes.

On Oct. 7, The Wall Street Journal cited U.S. government officials as saying that over two dozen U.S. special operations soldiers and support troops are stationed in Taiwan to provide military training for ground forces. This confirmed a report from last November citing Taiwan's Naval Command as stating that a contingent of U.S. Marines had arrived at the invitation of Taiwan's military and would begin training Taiwanese troops.