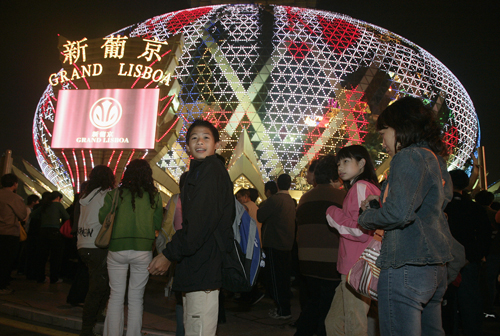 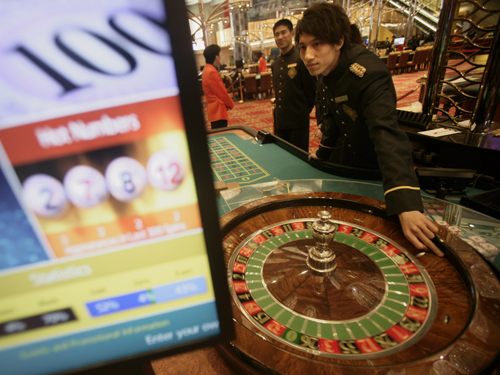 On a Monday morning the gaming halls of Macau's newest casino, the Grand Lisboa, are packed as punters from mainland China crowd the baccarat tables.
Most are dressed in jeans and trainers, but an abundance of luxury brand shopping bags reveal their rising spending power.
Chinese consumers and gaming liberalization have made Macau one of the fastest-growing economies globally, overtaking Las Vegas last year as the world's biggest earner of gambling revenue, according to Macau government data.
Tourism has nearly doubled since 2003 as Beijing has allowed freer travel to the former Portuguese colony, a 28-square-kilometer enclave on China's southern tip, an hour's boat ride from Hong Kong.
More than 10 million mainlanders flocked here last year, half of total visitors.
While Macau's gross domestic product at US$14 billion is less than a 10th the size of that of Hong Kong, the economy has been growing at double-digit rates and should expand by another 16 percent this year and 16.5 percent in 2008, forecasts Goldman Sachs.
Labor shortage
Such fast-paced growth, however, is creating challenges, notably a labor shortage and lagging infrastructure, analysts say.
"The biggest risk for the economy is that it doesn't relieve these constraints fast enough," said Enoch Fung, associate economist at Goldman Sachs. "It also needs to develop into industries that are complementary to gaming."
Macau is the only place in China where gambling is legal thanks to the Portuguese who legalized it in the 1850s.
Local tycoon Stanley Ho pioneered Western-style casinos after winning a monopoly concession in the 1960s but liberalization in the past few years has ended his dominance as foreign casino operators have rushed in.
Local media report the casino industry will require 50,000 croupiers by 2009. That's 10 percent of Macau's population.
Ho's Grand Lisboa, a towering structure shaped like a lotus flower, will be soon followed by more new casinos including MGM Grand Macau and Las Vegas Sands' The Venetian.
The latter, which will open late this year, claims to be the world's largest casino with 600,000 square feet of gambling space as well as 3,000 hotel rooms.
"There's a lot of competition for labor," said Ooi Lay Peng, vice president of human resources at MGM Grand Macau, which is hiring 6,000 staff. "Macau needs to relax its immigration laws."
Frustrated investors
Workers from Hong Kong are taking jobs but many more are required as the enclave attracts growing foreign investment.
On an early evening ferry to Hong Kong, Italian businessmen chat in the front row of business class alongside Hong Kong executives.
Ferries between the cities are crammed and more infrastructure is needed, including a long-delayed 29-kilometer bridge link with Hong Kong and Zhuhai in south China, analysts say.
The overall lack of resources is frustrating investors.
"It's extremely challenging," said Ken Kress, China head of Italian menswear retailer Ermenegildo Zegna, which has two franchised stores here with local company Rainbow Group. It will open its own store this year.
"Typically we'd look for the construction phase on a store to take two months to 10 weeks but in Macau it's six months," said Kress. "For most of that time nothing is going on because the contractors and workers are moving around different projects."
The opening of the five-star Wynn Macau casino resort last year brought in Chanel, Bulgari, Prada and other luxury retailers, whose boutiques grace the resort lobby.
Macau's image however is tarnished by corruption. Its transport minister was arrested last year for allegedly accepting bribes while the United States identified local bank Banco Delta Asia as laundering money for North Korea.
Risky business
Hong Kong think-tank Political and Economic Risk Consultancy says gambling money flows into Macau - which reverted to Chinese rule in 1999 but has its own government - could be seriously hurt if Beijing were to mount an effective anti-corruption campaign.
There are signs though the city is looking beyond gaming, which in recent years contributed 50 percent of economic growth.
Last year saw the opening of Fisherman's Wharf, a retail and leisure development, while The Venetian will imitate a slice of Venice's Baroque splendor, complete with canals and gondolas, and house a 1.2 million-square-foot convention center.
"Macau is attracting mainland Chinese who think they'll get rich by gambling. But in five to 10 years they'll know the risk of losing," said Kenneth Hsia, a businessman from Taiwan who visits Macau regularly.
"People go to Las Vegas for fun not to make money and, long term, Macau too will have to provide a lot more."