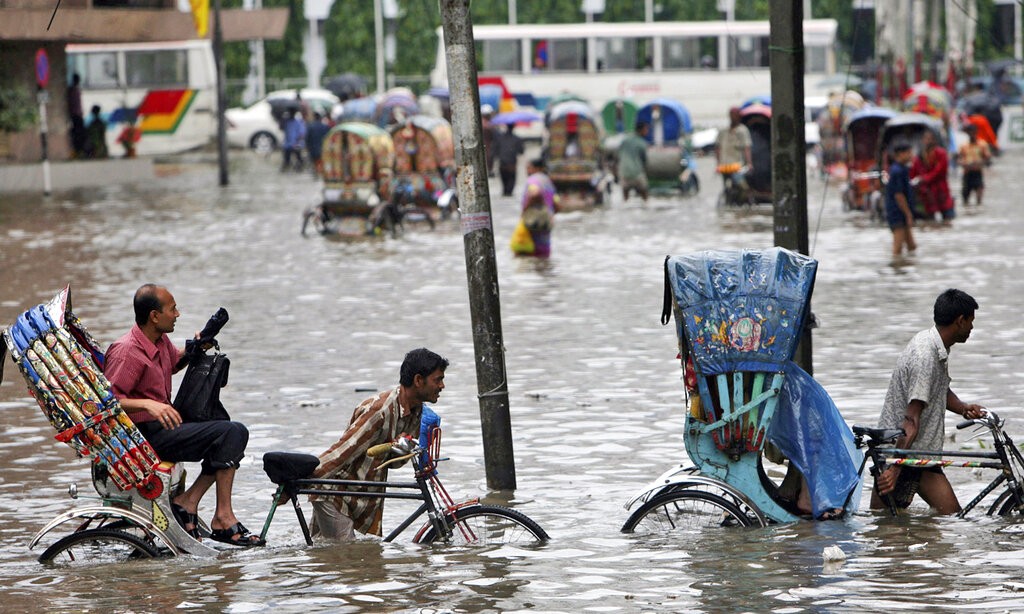 BENGALURU, Oct 25 (Reuters) - Hitting the Paris Agreement goal of net-zero carbon emissions will require investments in a green transition worth 2%-3% of world output each year until 2050, far less than the economic cost of inaction, according to a Reuters poll of climate economists.

Respondents also said such a transition depended on the rich world fulfilling promises to help developing economies, and on measures to set a global carbon price of at least $100 - well above the level reached in most current schemes.

Reuters polled economists in Europe, Asia and the Americas ahead of the Oct. 31-Nov. 12 UN talks in Glasgow, widely seen as the world's last chance to limit global temperature rises to "well below" 2 degrees Celsius and ideally to 1.5C.

The survey, the first of its kind by Reuters, highlighted the daunting fiscal challenge ahead for governments which since January 2020 have spent a total of $10.8 trillion - or 10.2% of global output - in response to the COVID-19 pandemic.

Asked whether they thought the COP26 talks in Glasgow would help reach Paris Agreement goals, the pessimists outweighed optimists by nearly three to one, with 32 of 44 respondents saying they were pessimistic on that score.

While the Sept. 16-Oct. 20 poll also revealed differences among top forecasters over how to measure the economic stakes of climate change and decarbonisation, it showed a strong consensus of views around the benefit of early and coordinated action.

"If we delay acting on climate change, the higher that cost to reach net zero emission by 2050 goes," said Charles Kolstad, professor of economics at Stanford University.

"Clearly developing countries cannot be expected to pay for mitigation while they are investing in development and helping their poorest citizens. Insisting on their paying will not accomplish anything."

The relatively narrow 2%-3% of global GDP range per year favoured by the bulk of respondents to reach net zero emissions is somewhat higher than estimates cited by other bodies.

The International Monetary Fund this month cited estimates that net zero by 2050 would mean extra investments of 0.6%-1% of annual global GDP over the next two decades amounting to a cumulative $12 trillion-$20 trillion.

In the Reuters poll, there was substantial divergence in the scale of dollar estimates for the cumulative investment needed, reflecting the differing methodologies used by economists. The median view provided was $44 trillion.

James Nixon, head of climate change macroeconomics at Oxford Economics, put the cumulative amount of investments needed in the energy and other sectors at almost $140 trillion by 2050, the highest estimate obtained in the survey.

"While mitigation may be expensive and potentially politically painful, I think it's incumbent on economists to show that not doing anything is even more expensive," he said.

By comparison, the shutdowns of economic activity caused by COVID-19 shrunk the world economy by 4.3% last year, according to the World Bank.

"The economic impact of COVID has been significant but temporary. The GDP impacts of climate, however, are permanent, long-term and grow larger with each year of inaction," said Claire Ibrahim, a director at Deloitte Access Economics.

The goal of the COP26 talks is to get world capitals to double down on commitments to reach net-zero emissions and spell out exactly what tools they intend to use and over what timeframe.

COP26 host Britain has reaffirmed that developing countries in particular need support, and it has called on the rich world to deliver on a promise to raise at least $100 billion every year for a green climate fund to support them.

In the Reuters survey, 18 of 31 economists who responded to a question on burden-sharing said that fund should be a priority.

Seven said policymakers should set a collective financial goal with multilateral financial institutions such as the International Monetary Fund (IMF) and World Bank, and two said developed countries owed financial compensation to those who have suffered or are vulnerable to the impact of climate change.

Among other tools available to combat rising emissions, there was strong support for tougher carbon pricing, with national schemes currently only covering around 20% of global emissions and with prices as low as $1 per tonne of CO2.

The median recommendation of the 28 economists who replied was for a price of at least $100 per tonne to incentivise net zero emissions by 2050 - higher than an IMF recommendation of $75 by 2030 but lower than Sweden's $137 a tonne. read more

While the survey drew complete answers to all questions from numerous prominent climate economists, others were dismissive of such attempts at quantification, showcasing the continuing dilemma among climate economists on the subject.

"Climate change is something that breaks the economists' toolbox," said Eric Neumayer, Professor of Environment and Development at the London School of Economics.

"It's economists' hubris to say all the damage is going to be X percent of GDP. The cost of reducing emissions is Y percent of GDP and hence you should reduce emissions by a certain amount. As economists, we should listen to the scientists who tell us about the devastating impact of climate change."