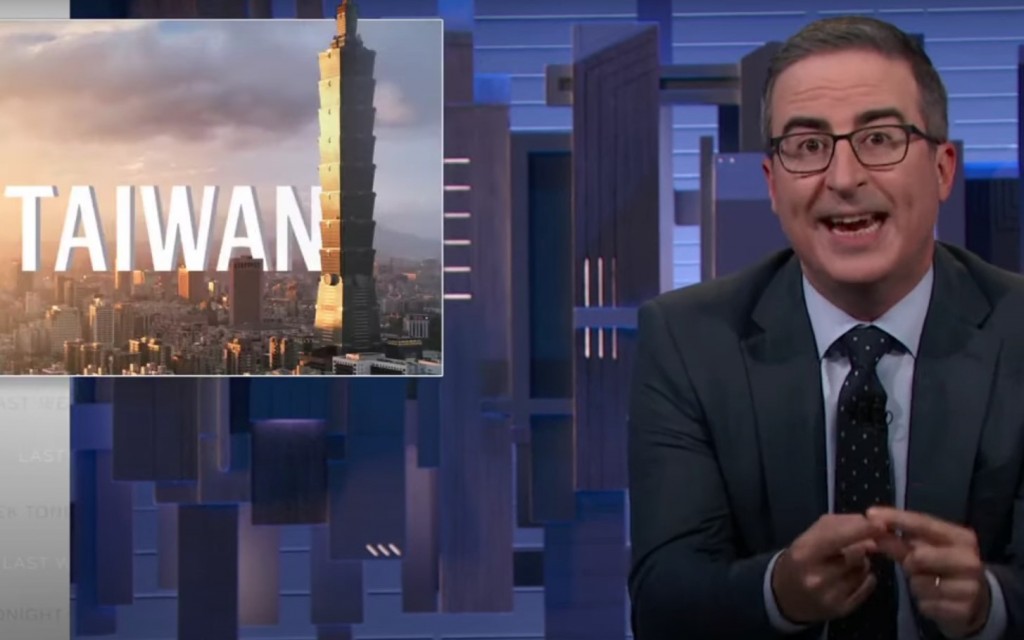 TAIPEI (Taiwan News) — Taiwan was the focus of the latest episode of "Last Week Tonight with John Oliver," which aired Sunday (Oct. 24).

“China insists that Taiwan, an independently operating entity, with its own democratically elected leaders, armed forces, and constitution, is actually a part of China and in no way a separate country,” Oliver said.

He pointed to John Cena’s video apology to Chinese fans as proof of Beijing’s unyielding position over Taiwan. The video was recorded to atone for his remark that Taiwan would be the first nation to show his movie “Fast 9.”

Oliver then quickly gave an overview of Taiwan's history. He said that though Taiwan was previously known as “Free China,” under Chiang Kai-shek (蔣介石), it was really an authoritarian regime that had committed atrocities in the name of eradicating communism.

The TV host said that since Taiwan transitioned to a “vibrant democracy” in the early 1990s, physical fights are not uncommon in the Legislative Yuan. He brought up the pork intestines incident that occurred in November 2020 when the Kuomintang was protesting President Tsai Ing-wen’s (蔡英文) approval of ractopamine pork imports.

Oliver said that Taiwan is a “major player in the global supply chain” and was the “fastest growing economy in Asia” in 2020. He added that it is the “world’s key manufacturer of semiconductors.”

Despite its significant contributions to the world economy, many foreign companies have felt the wrath of China for implying that Taiwan is a separate country. Oliver listed Delta Airlines, Zara, Givenchy, Muji, Audi, and Asics as brands that have had to apologize for offending Beijing in this regard.

The TV host said that Taiwan’s international participation has also been affected by China, referring to its exclusion in the World Health Organization and its assigned moniker of Chinese Taipei during global athletic competitions.

Oliver remarked that the U.S. has maintained a strategy of strategic ambiguity, as evident by its American Institute in Taiwan. He described Washington’s policy as a “will they, won’t they dance.”

After discussing Taiwan from an outsider’s perspective, Oliver asked the most important question of all: “What does (Taiwan) want for itself?” He acknowledged that even that is difficult to answer, as the East Asian nation has “many different cultures, languages, and political viewpoints.”

He said that through democratic elections, the Taiwanese have chosen to “keep China at arm’s length.” President Tsai has pledged to defend Taiwan but preserve the status quo, Oliver noted.

The TV host wrapped up the segment by saying the Taiwanese have established “a free and democratic society” and “very much deserve the right to decide their own future in any way that they deem fit.”