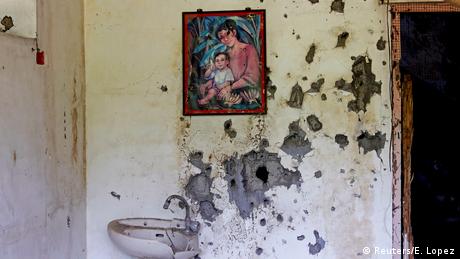 The siege had been raging for two days before Gilda could contact her son Jessie. He worked in a bakery in Marawi, a city on the southern Philippine island of Mindanao.

Aged 17, he wanted to help his mother provide for his three sisters.

"He said there was no electricity and they had nothing to eat. He said it was bad luck that they got caught in the war," Gilda told DW.

That was the last time she heard Jessie's voice.

On May 23, 2017, militants affiliated with "Islamic State" (IS) took control of Marawi, in a bid to establish a nationwide caliphate. Officially known as the Islamic City of Marawi, it is the largest Muslim city in the mostly Catholic nation.

Government troops were sent in and five months of bloody urban warfare followed. On October 23, Philippine Defense Minister Delfin Lorenzana declared there were no more "militants" in Marawi.

But four years on, some of the relatives and friends of those who went missing during the siege are still searching for closure.

An estimated 1,200 people died during the battle. While most of these were armed extremists, Amnesty International reported that the militants took civilians as hostages and carried out extrajudicial killings. A number of civilians who were killed during the siege remain unidentified.

A month after she spoke to her son on the telephone in 2017, Gilda received another call from someone using Jessie's number. The rebels had taken him hostage.

"I felt like I was going to lose my mind. I still don't know what happened to him. It still hurts so much now," she said, her voice cracking.

The trouble with identifying remains

The Philippine National Police (PNP) Crime Lab has processed the remains of 470 people who died during the fighting. Of the 124 relatives who submitted a DNA sample to detect a possible match, just four were able to match and identify the remains of their missing loved one.

PNP Colonel Ruel Vacaro last May said that the government needs more relatives to submit their DNA sample for possible matching with the remains in their database.

Additionally, identification of human remains in a disaster, especially a conflict-related one, is difficult without a system, funds and forensic science, according to leading forensic pathology expert Raquel Fortun.

"We need a coordinated death investigation system for both day-to-day deaths and mass casualty incidents. Without a system for connecting those reported missing to bodies recovered, families are left to search on their own. There will be mistakes made and families may end up with nothing," Fortun, who heads the Department of Pathology at the University of the Philippines, told DW.

Living with the ambiguity of loss

Ending up with nothing is what Melgie is afraid of. Victor, her partner of six years, was supposed to wrap up his construction project but a delay in delivery of materials forced him to stay in Marawi.

During their last phone conversation, Victor said that he and others had secured themselves in a house. Victor and nine of his other relatives remain among the missing and unidentified.

"I don't know if he is dead or alive. His father died last year not knowing what happened to him. Will I also die not knowing?" Melgie told DW.

"The ambiguity and uncertainty of what happened to their loved ones freezes the process of grieving for the families of the missing," Sherzod Musrifshoev, mental and psychosocial support delegate for the International Committee of the Red Cross (ICRC), told DW.

"If someone dies, the community knows what to do to support the family. But when someone is missing, what do you do? It can be very isolating for the family members," Musrifshoev said.

For now, without a well-funded, coordinated identification process in place for the missing, the ICRC organizes group sessions for families of the missing to come together and remember their loved ones. Some bring the favorite food of their missing relatives, most bring photos.

"The ceremonies during these group sessions is one way families can learn to live with the ambiguity of their loss," said Musrifshoev.