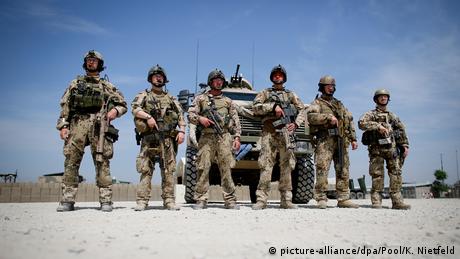 His remarks came a day after reports of Germany, along with four other EU states, launching an initiative to establish an EU-wide crisis reaction force, inspired by the Afghanistan withdrawal fiasco.

NATO's cooperation with the EU has already reached "an unprecedented level," Stoltenberg said at a press conference following a meeting with the alliance's defense ministers.

Stoltenberg welcomed the increasing defense ambitions of EU states but said these should not "duplicate" NATO structures.

"What is needed are more capabilities, not new structures," Stoltenberg said. "Our trans-Atlantic alliance remains the bedrock for our security."

What did defense ministers say?

German Defense Minister Annegret Kramp-Karrenbauer said the EU's ambitions were not to compete with NATO. She said the plan submitted by Germany, Portugal, Slovenia, Finland and the Netherlands for expanding the bloc's defense capabilities was met with a positive response.

France's defense minister, Florence Parly, told her counterparts that the United States would also benefit from the EU's defense plans.

"When I hear some defensive statements on European defense and when I observe certain threats, including within this organization, I say: 'Don't be afraid!'" Parly said. "European defense isn't being built in opposition to NATO, quite the contrary: a stronger Europe will contribute to a strengthened and more resilient alliance."

"What we'd like to see are initiatives that are complementary to the types of things that NATO is doing," Austin told a news conference.

What is the EU reaction force plan?

Although European countries have modern cyber, naval and air power, the crisis in Afghanistan gave new impetus to conversations about enhancing the EU's military power. European states have acknowledged that any EU mission would likely lack the kind of support that the US provides.

Germany, Finland, the Netherlands, Portugal and Slovenia have put forward a proposal to expand the EU's military units by establishing a bloc-wide rapid reaction force for future military crises.

The proposal also includes invoking Article 44 of the EU Treaty, which allows coalitions of willing member states to carry out security activities with the permission of other non-participating countries.