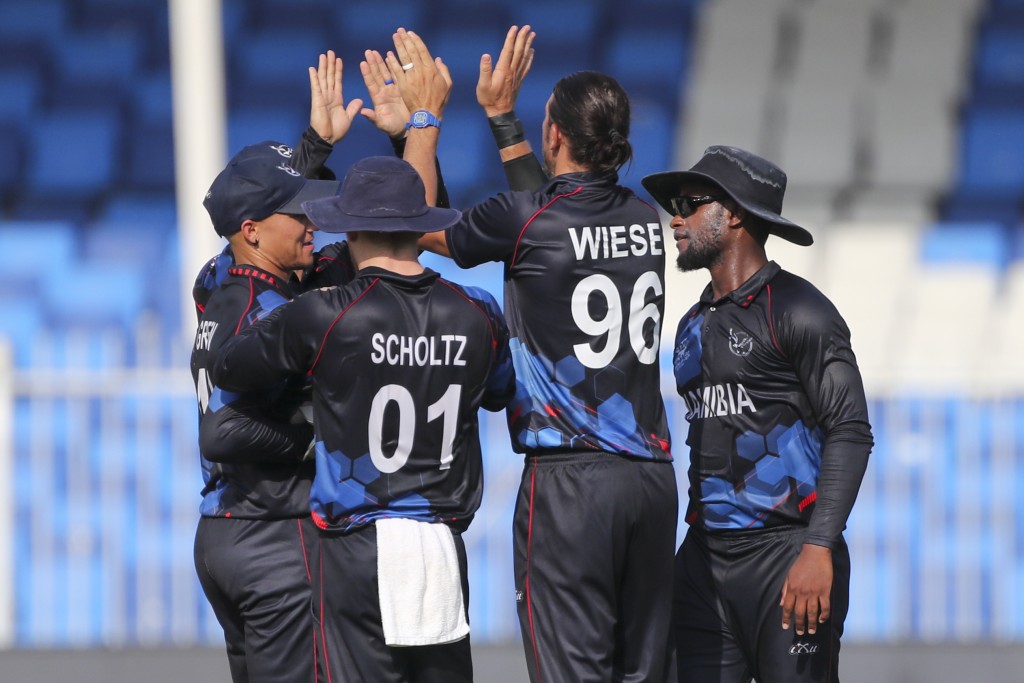 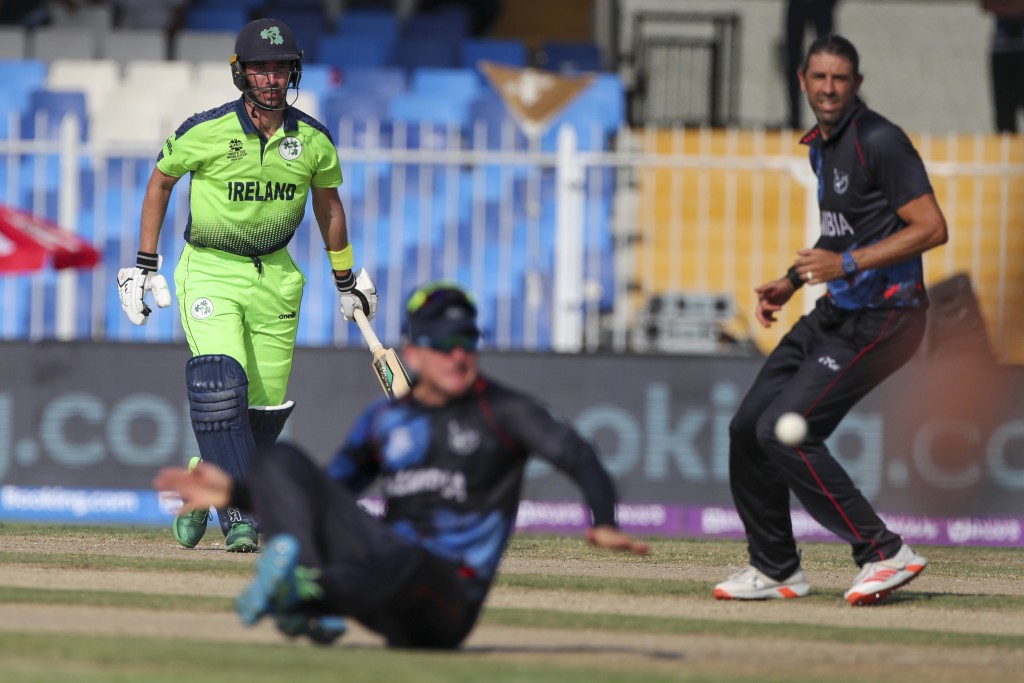 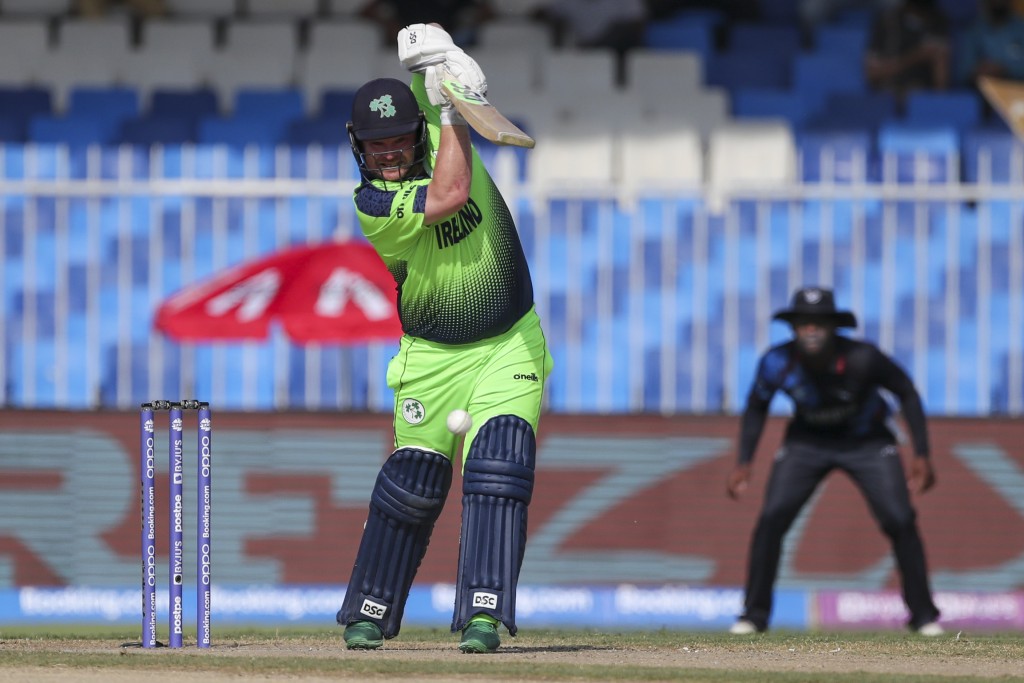 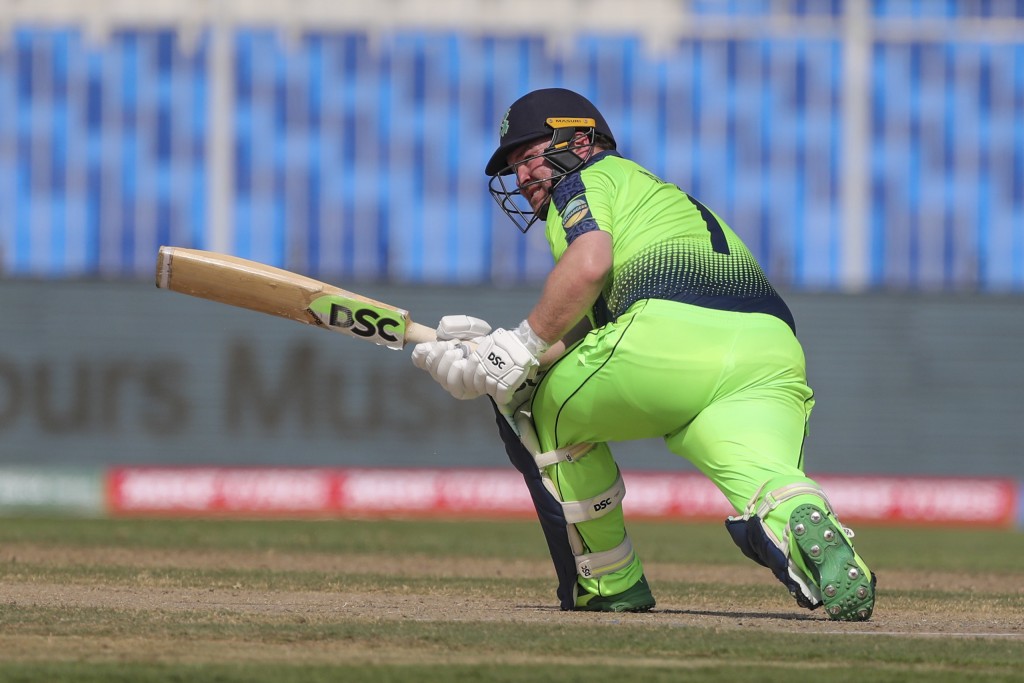 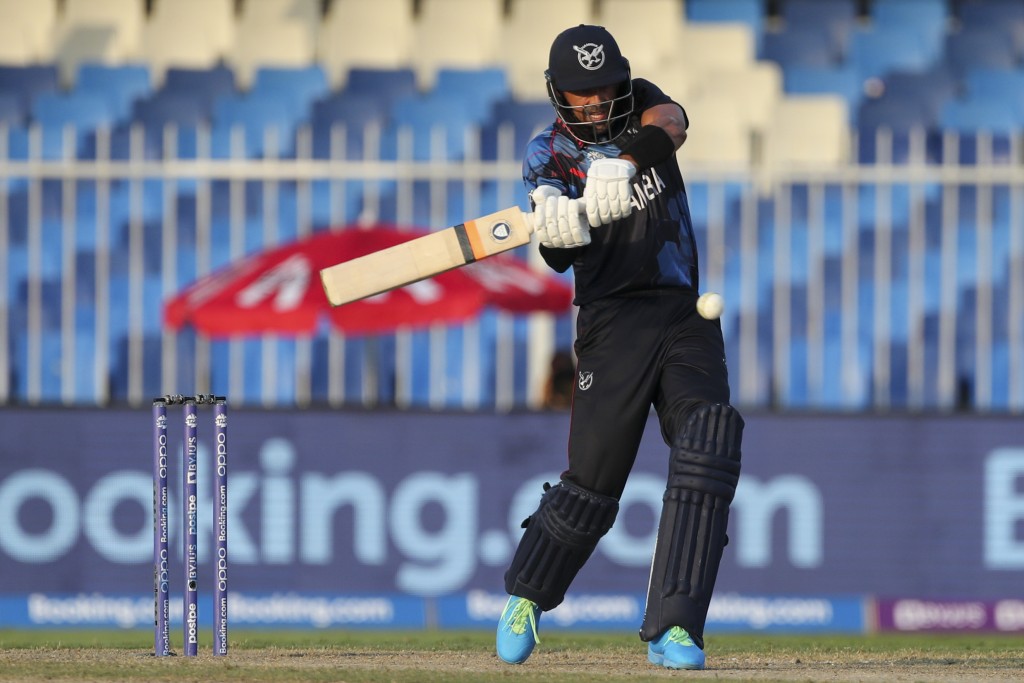 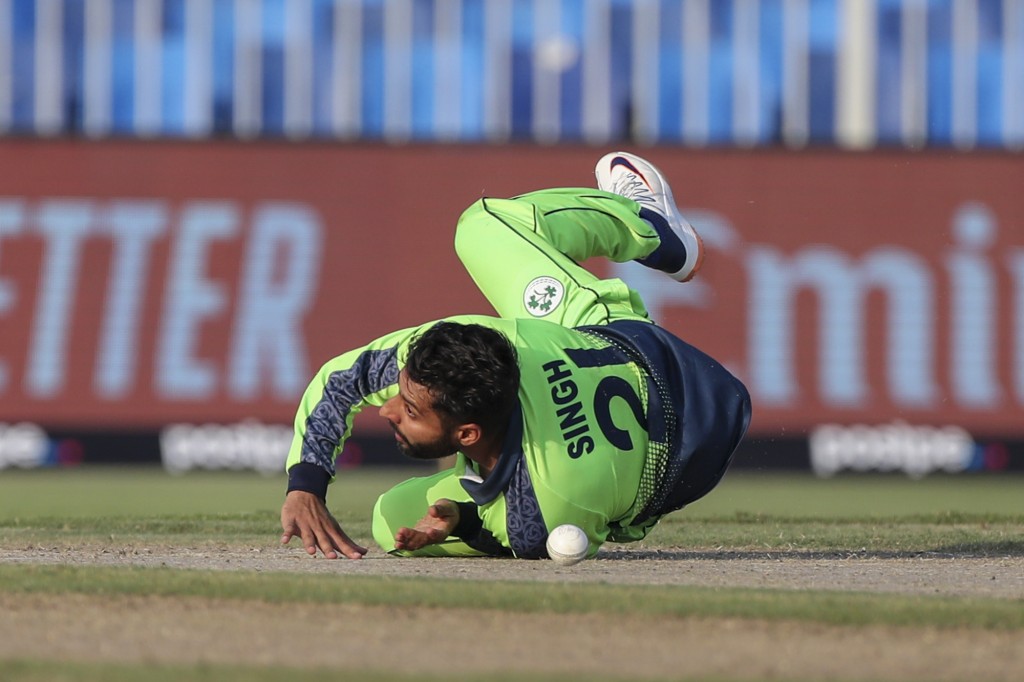 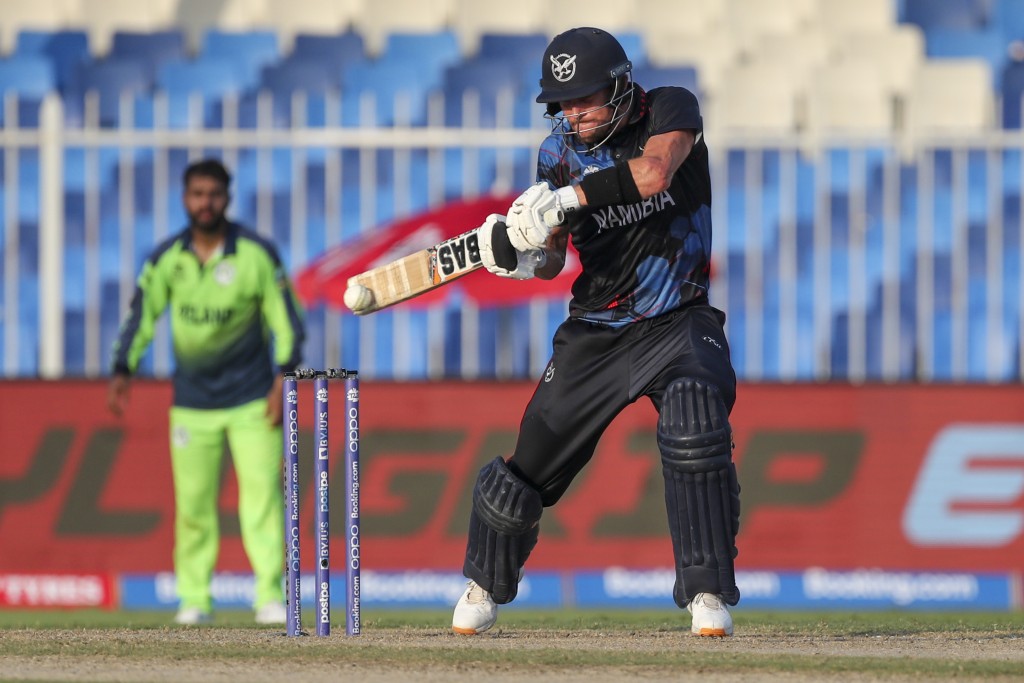 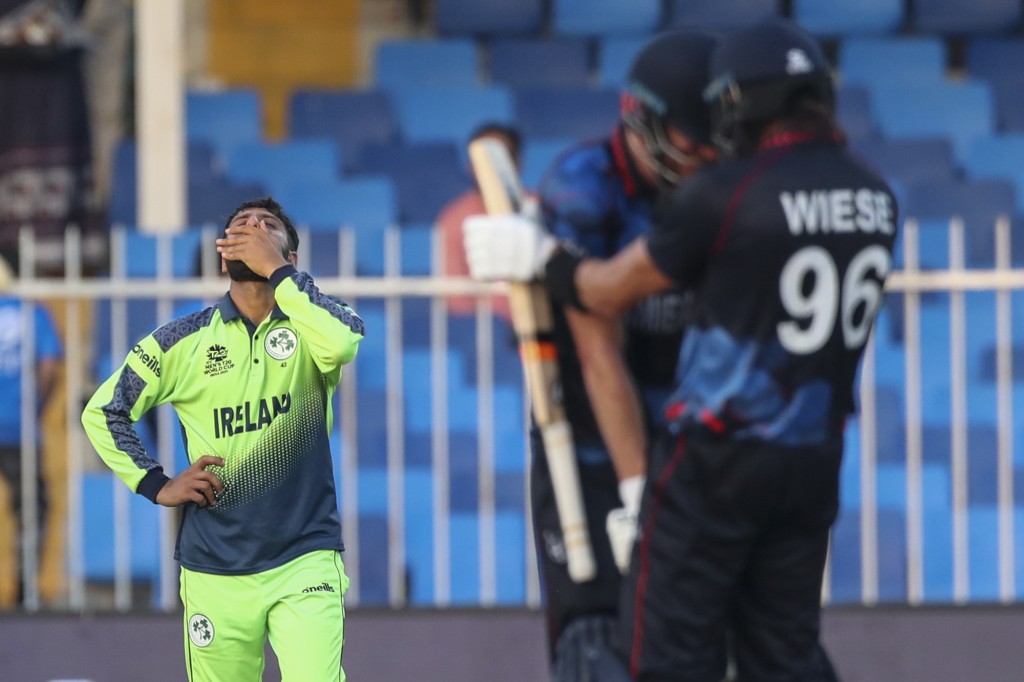 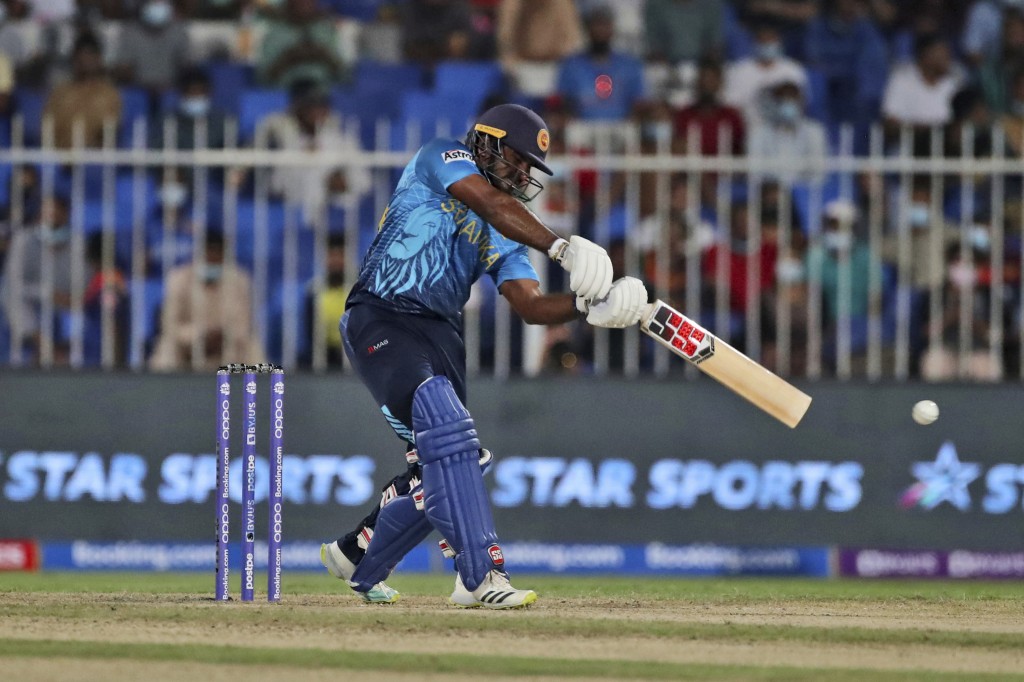 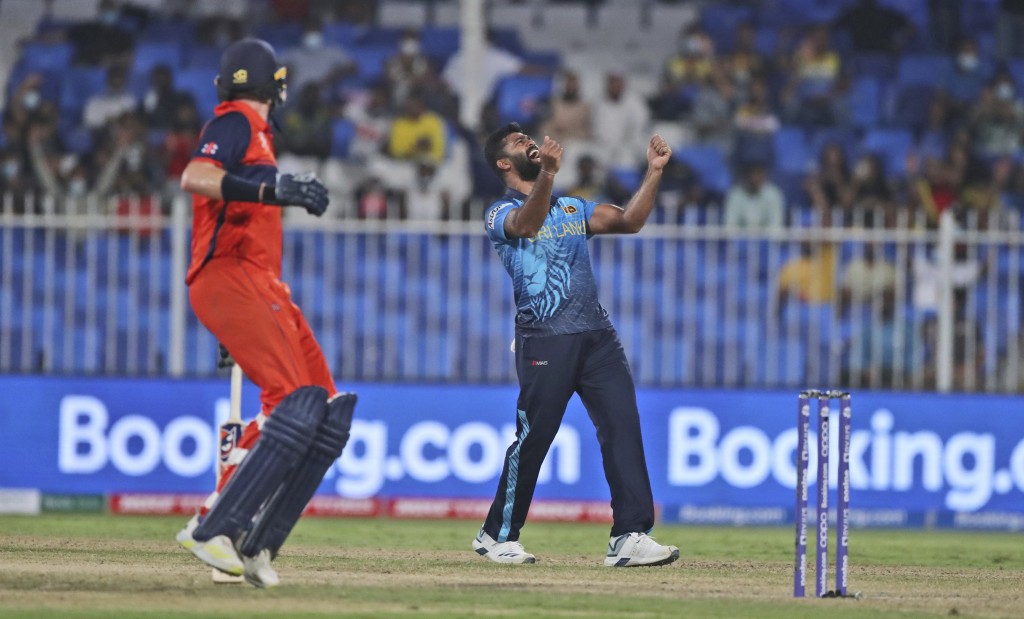 SHARJAH, United Arab Emirates (AP) — Namibia reached the main draw of the T20 World Cup for the first time by beating Ireland by eight wickets on Friday and completing the lineup for the Super 12s.

Set a target of 126 to win, Namibia got there with nine balls balls to spare mainly thanks to 53 not out off 49 balls by captain Gerhard Erasmus, who shared an unbeaten 53-run partnership with David Wiese (28).

Erasmus appeared to be close to tears after Wiese smashed a wide and full delivery through the covers for four to clinch Namibia's first victory over a test-playing nation.

“We run a pretty tight ship and we are a small cricketing nation,” Erasmus said. “It's one heck of an achievement and we should be proud of ourselves.”

The Namibians previously beat the Netherlands in Group A of qualifying for the country’s first win at a World Cup and went a step further by taking down an opponent seven places higher than them in the ICC rankings.

They enter Group B of the Super 12s, which start Saturday, where they will play India, New Zealand, Pakistan, Afghanistan and Scotland.

Sri Lanka had secured a place in the main draw before thrashing already-eliminated Netherlands later Friday, skittling its opponent for just 44 runs and easing to the victory target in 7.1 overs

Ireland, looking to qualify for the main draw of the T20 World Cup for the first time since 2012, won the toss and was in a strong position on 55-0 after six overs at the end of the powerplay.

The team failed to build on its positive start and the runs stopped flowing on a slow pitch after Paul Stirling was out for a 24-ball 38. The Irish finished on 125-8, having been 62-0 after 7.1 overs.

It was close on run rate before two straight pulls for six by Wiese off Craig Young in the 15th over. There was another big six straight down the ground, this time from Erasmus in the 18th over, and the captain held his pose after moving Namibia to the brink of victory.

"We didn’t get enough runs," Ireland captain Andrew Balbirnie said. "It will be hard to get over it, and it hurts a lot.

“I think Wiese played a brilliant hand when the rate was at 8 (runs an over), and their skipper saw them home.”

Sri Lanka cruised into the Super 12s with three straight wins, the latest coming after bowling out the Netherlands in 10 overs for the second lowest total ever at a T20 World Cup. The Dutch also recorded the lowest score and that was against Sri Lanka, too — 39 in the 2014 competition.

Lahiru Kumara had 3-7 in three overs, and Wanindu Hasaranga de Silva had 3-9.

Kusal Perera hit 33 not out as Sri Lanka reached its target for the loss of two wickets.

Sri Lanka is in Group A in the Super 12s with Australia, England, South Africa, the West Indies and Bangladesh.

The Netherlands lost all three of its group games.

Namibia and Scotland, which won all three of its group games, are both Associate members of the International Cricket Council.