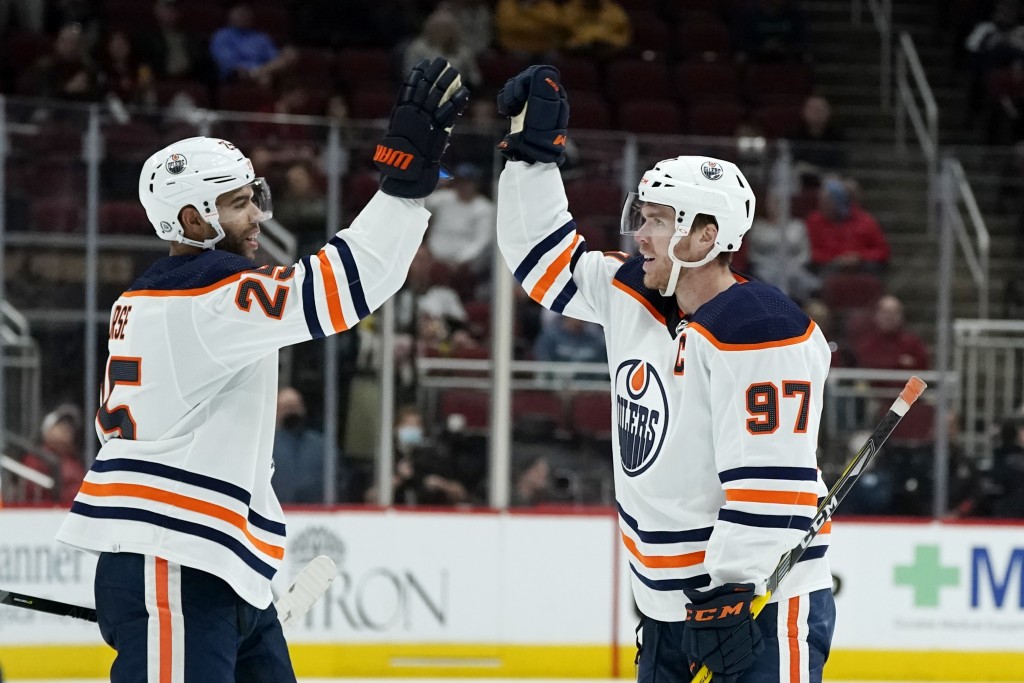 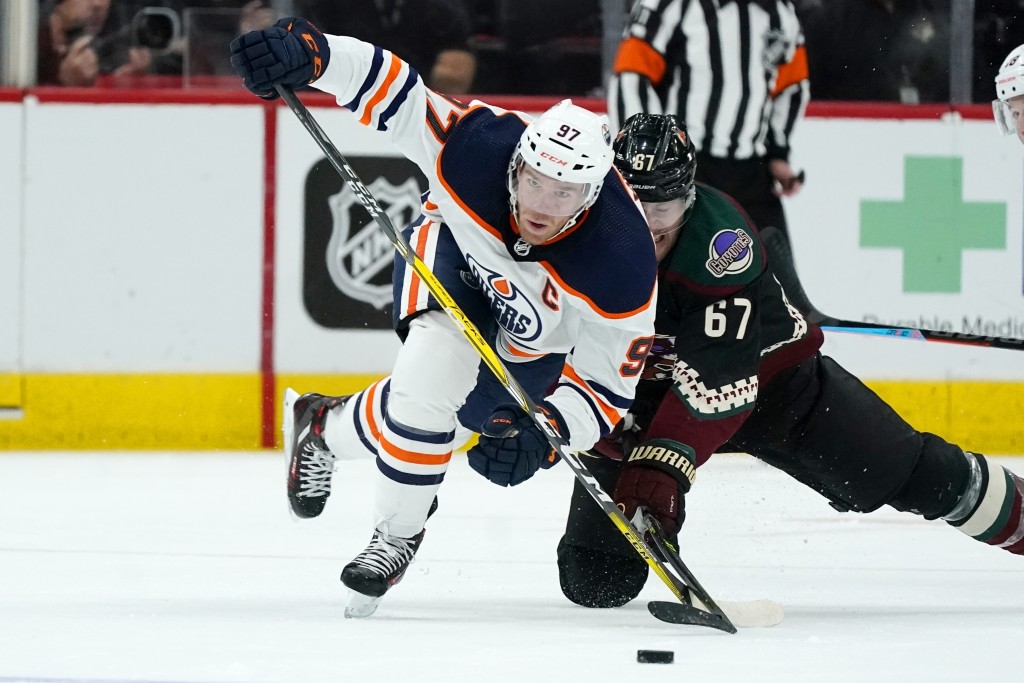 GLENDALE, Ariz. (AP) — Connor McDavid scored twice to eclipse 200 career goals and had an assist, Zach Hyman had two goals and the Edmonton Oilers remained undefeated with a 5-1 victory over the winless Arizona Coyotes on Thursday night.

The Oilers were sharp in their first regular-season in the U.S. since March 5, 2020, due to the pandemic, scoring at least five goals for the third straight game.

McDavid scored in the second period to hit the 200-goal mark — two days after teammate Leon Draisaitl reached the milestone — and scored his sixth goal in four games in the third. He has multiple points in every game this season and 11 overall.

Mikko Koskinen had 25 saves in his first start since Mike Smith went on injured reserve with a lower-body injury. Warren Foegele also scored for Edmonton.

Dysin Mayo scored in his NHL debut and Karel Vejmelka stopped 26 shots for the 0-3-1 Coyotes. They allowed at least five goals for the third time this season.

MONTREAL (AP) — Jesperi Kotkaniemi scored his first goal for Carolina in his return to Montreal, helping the Hurricanes beat the winless Canadiens.

The 21-year-old Kotkaniemi left the Canadiens for the Hurricanes over the summer after signing a $6.1 million offer sheet. The Finn was booed every time he touched the ice, let alone the puck.

With 10:37 to go, Kotkaniemi tipped in a shot from Brady Skjei to restore Carolina’s two-goal lead.

Sebastian Aho had two goals and an assist, Andrei Svechnikov also scored and Vincent Trocheck and Teuvo Teravainen each had two assists.

Jake Allen made 29 saves as Montreal dropped to 0-5-0 after reaching the Stanley Cup Finals last season.

Drake Batherson scored for the Senators.

Brady Tkachuk and goaltender Matt Murray made their season debut for Ottawa. Tkachuk, who signed a new contract last week, assisted on Batherson’s goal. Murray made 22 saves after missing the first three games with the flu.

NEWARK, N.J. (AP) — Daniel Sprong set up Washington’s first goal and scored on a second-period breakaway in the Capitals' victory over New Jersey.

Anthony Mantha, Dmitry Orlov and Evgeny Kuznetsov also scored to help the Capitals improve to 3-0-1 and drop the Devils to 2-1-0. Alex Ovechkin had his three-game goals streak snapped but two assists.

Vitek Vanecek had 25 saves for Washington, losing his shutout bid on Janne Kuokkanen's power-play goal with 6:42 to play.

Laine’s wrist shot from the left circle sent him tumbling to the ice and beat Ilya Sorokin. Elvis Merzlikins made 28 saves as Columbus improved to 3-1.

Mathew Barzal scored early in the third period for the Islanders to tie it after the Blue Jackets tallied twice in 33 seconds to end the second. Eighteen-year-old Cole Sillinger got his first NHL goal and Boone Jenner added his third of the season for Columbus.

Scott Mayfield also scored for the Islanders. They dropped to 1-3.

Philip Tomasino scored, and Juuse Saros made 27 saves for Nashville. The Predators are 1-3-0.

Thatcher Demko made 29 saves, and Conor Garland added an empty-netter for the Canucks int he fifth game of a six-game trip, their longest to start a season in team history.

Alex DeBrincat scored a power-play goal for sputtering Chicago, which dropped to 0-4-1. Kevin Lankinen was sharp in stopping 22 shots.

The 4-0-0 start is the best in Panthers history. They had seven points in the standings through the first four games on three other occasions: 1996-97, 1999-2000 and last season. Florida made the playoffs in each of those seasons.

Anton Lundell had a goal and an assist, and Carter Verhaeghe and Sam Reinhart also scored for the Panthers. Mason Marchment added two assists. Bobrovsky made 30 saves, allowing only Mikko Rantanan's goal.

WINNIPEG, Manitoba (AP) — Kyle Connor scored twice and added an assist with regular linemates Blake Wheeler and Mark Scheifele in COVID-19 protocol and Winnipeg beat Anaheim for its first victory of the season.

Playing on a line with Pierre-Luc Dubois and Evgeny Svechnikov, Connor scored his first goal into an empty net with 2:49 left, then beat goalie John Gibson with 1:14 to go to cap the scoring.

Connor Hellebuyck made 38 saves to help the Jets improve to 1-2-1. Dubois had a goal and assist, Andrew Copp and Josh Morrissey also scored, and Nate Schmidt added two assists.

Troy Terry scored for Anaheim, and Gibson made 22 saves.