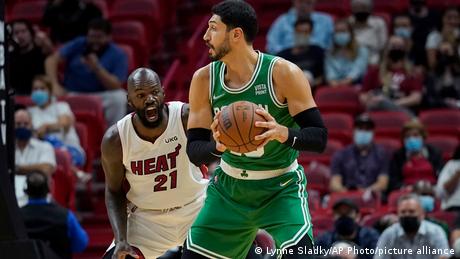 Broadcaster Tencent, Chinese partner to the US National Basketball Association (NBA), has blacked out access to all Boston Celtics games after one of the team's players accused the Chinese government of "cultural genocide" in Tibet.

All Celtics games — both current and archived, as well as highlights — will no longer be accessible in China after Enes Kanter criticized the country's policies toward Tibet in a series of social media posts, including a two-minute video in which he was seen wearing a T-shirt with an image of the Dalai Lama, Tibet's exiled spiritual leader.

"I'm here to add my voice and speak out about what is happening in Tibet. Under the Chinese government's brutal rule, Tibetan people's basic rights and freedoms are non-existent," Kanter said in the video, posted on Wednesday. The post also featured text describing Chinese President Xi Jinping as a "brutal dictator."

During the Celtic's season opener against the New York Knicks on Wednesday night, Kanter wore shoes emblazoned with the words "Free Tibet." The game was conspicuously absent from streaming services broadcasting in China.

"More than 150 Tibetan people have burned themselves alive!! — hoping that such an act would raise more awareness about Tibet. I stand with my Tibetan brothers and sisters, and I support their calls for Freedom,'' he wrote on Twitter after the game.

On Thursday, Chinese Foreign Ministry Spokesman Wang Wenbin told reporters that Kanter was "trying to get attention." He bristled at the criticism and said the player's comments "were not worth refuting. We will never accept those attacks to discredit Tibet's development and progress."

Though he has yet to comment on these recent developments, Kanter has a long history of speaking up on politics. A Turkish national, he has been highly critical of President Recep Tayyip Erdogan. Ankara has labeled him a member of a terrorist group — something the player denies — and Kanter said his passport was revoked by the Turkish government in 2017.

Chinese users pummeled both the player and the Celtics on social media and his name appeared to be blocked on Tencent's Weibo messaging platform after his criticism of Xi. Twitter is banned in China.

Beijing, which considers the Dalai Lama a separatist, has ruled Tibet since the People's Liberation Army marched in and took control of it in 1951, during what China calls a "peaceful liberation."

The tense situation is not the first of its kind and highlights the tightrope the NBA has chosen to walk in an attempt to balance the free speech rights of its players and coaches with a desire to remain on good terms with an authoritarian regime in Beijing as part of a multi-billion dollar broadcasting agreement.

The biggest hit to the relationship came in October 2019, when Daryl Morey, who was the Houston Rockets' general manager at the time, tweeted support for the people of Hong Kong, who were protesting for democratic freedoms. China immediately blacked out the league, massive public advertisements for games were removed, and sponsors began jumping ship.

The blackout eventually ended when NBA games returned to Tencent but state broadcaster CCTV only broadcast two games after the incident. When Morey moved to work for the Philadelphia 76ers, Tencent dropped them from its broadcasting schedule.

Speaking earlier this week, NBA Commissioner Adam Silver said: "It's unclear whether we'll be back on CCTV television in China this year."

Rights groups have consistently urged US businesses operating in China to stand up to Beijing. Currently, a number of them are calling on the US Olympic and Paralympic Committee (USOPC) to boycott the upcoming Beijing Winter Olympics over the documented human rights abuses of Tibetans, Hong Kongers and Uyghur Muslims.

Abuse of that last group, the Muslim-minority Uyghurs, prompted 43 nations from the UN General Assembly Human Rights Committee to sign a public letter of condemnation regarding Beijing's activities in its western Xinjiang region Thursday.

Human rights observers estimate that as many as one million Uyghur, Kazakh, Hui and other Muslim minorities are being held in "concentration camps." Beijing denies any wrongdoing, calling the individuals detained in the Xinjiang autonomous region "separatists" and "terrorists" that are not being held prisoner but rather are being "re-educated."

Observers say the "re-education camps" are being used to force Uyghurs — often through brutal means — into line with the ruling Communist Party. Reports of forced labor have been rampant. Western companies doing business in Xinjiang, such as Volkswagen, have said they have no knowledge of forced labor at their production facilities.