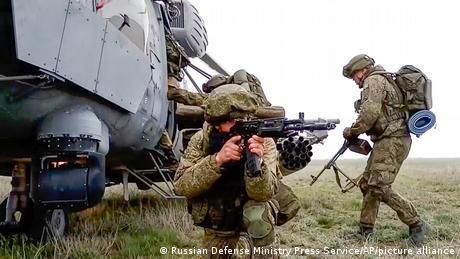 A meeting of NATO defense ministers in Brussels starting Thursday is discussing dealing with Russia at a time of difficult relations and review what lessons can be learned from the alliance's almost 20-year mission in Afghanistan, which ended in a recent chaotic withdrawal.

Later on Thursday, the ministers said that they had agreed to a confidential strategy to prepare for any simultaneous attack in the Baltic and Black Sea regions. The news was met with frustration by Russian President Vladimir Putin, who said that the alliance had "paved the way" for Ukraine to join, a move Moscow has long been opposed to.

"We are in the midst of a transformation of NATO. Over the last years we have stepped up and refocused on our collective defence to protect our own territory," NATO Secretary General Jens Stoltenberg said at the start of a two-day summit.

This new strategy would mean "ensuring we have the right forces in the right place at the right time," he said.

Ahead of the talks, Stoltenberg had acknowledged that relations between the alliance and Russia were particularly fraught, especially after several Russian envoys to the defense pact lost their accreditation amid allegations that they were spies. Moscow has said it will suspend Moscow's NATO representation in response to the alliance's move.

"It has not been more difficult since the end of the Cold War," Stoltenberg said, adding that while he regretted Moscow's decision, there were still "avenues and channels for communication."

The recent showdown over the envoys comes on top of the strains caused by Moscow's 2014 annexation of Ukraine's Crimea. Russia, for its part, has repeatedly complained about the stationing of NATO forces near its territory.

Although NATO officials have stressed that they do not believe an attack is imminent, the ministers are to discuss a master plan to counter any potential multiple-front Russian offensive. With the strategy, they hope to be ready for any attack in the Baltic and Black Sea regions, whether it involves nuclear arms, cyber warfare or space-based weaponry.

"This is the way of deterrence," German Defense Minister Annegret Kramp-Karrenbauer told German broadcaster Deutschlandfunk. "And this is being adapted to the current behavior of Russia — and we are seeing violations particularly of the air space over the Baltic states, but also increasing incursions over the Black Sea," she said.

The agenda of the two-day meeting also includes a review of the alliance's mission in Afghanistan, which came to an end in August after the Islamist Taliban retook power after waging a bloody rebellion since being ousted as rulers by a US-led invasion in 2001.

Defending NATO's work in Afghanistan at the start of the meeting, Secretary General Stoltenberg insisted that "Our mission was not in vain, we prevented Afghanistan from being a safe haven for international terrorists, and prevented an attack against any NATO ally over 20 years."

"We will stay vigilant and preserve those gains," he added.

As well as reviewing lessons to be learned from the mission, widely seen as having failed to bring any lasting progress to the country, the ministers will talk about ongoing efforts to evacuate local staff. They will also consider counterterrorism options in the case of Afghanistan, which some believe may once again become a launch pad for attacks on the West by other extremist groups.

The US toppled the Taliban in 2001 because they were protecting Osama bin Laden, the al-Qaeda leader who planned the 9/11 terrorist attacks on New York and Washington.

A 'bit early' to know

Stoltenberg said it was still a "bit early" to say what exactly what lessons should be drawn both from the chaotic withdrawal and from the failure to keep Afghanistan out of Taliban control.

"It highlights the challenges and the risks to engage in big missions and operations outside NATO territory,'' Stoltenberg told reporters. But, he said, "the lesson cannot be that we will never engage'' in operations to fight extremism or terrorism.

Kramp-Karrenbauer admitted that nation-building efforts in Afghanistan had clearly failed. "Particularly when you're pursuing long-term political goals, you may need longer than 20 years," she said.

The 30 defense ministers are also to discuss methods of shared deterrence and defense and investment in new technologies.