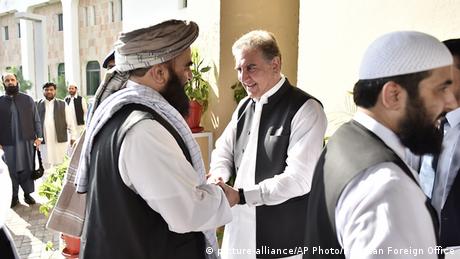 In late September, a little over a month after taking control of the Afghan capital, Kabul, Taliban fighters stopped a Pakistani truck at the Torkham border crossing and removed the country's flag from it.

But there are some other sore spots between the Taliban and Pakistan.

The Taliban's refusal to recognize the Durand Line as a permanent border separating the Pashtun-majority areas of Pakistan and Afghanistan also raised eyebrows in Islamabad.

A majority of Pashtuns — most Taliban leaders and fighters belong to the ethnic group — do not accept the 2,670-kilometre- (1,660-mile) long Durand Line as the international land border between the two countries.

The Durand Line was established by the British in 1893, and has remained a bone of contention between Afghanistan and Pakistan since the latter gained independence from British rule in 1947.

Pakistan played an important role in facilitating the 2020 US-Taliban deal. It has also backed the Taliban regime since it regained power in Afghanistan on August 15.

But Pakistan has not yet recognized the Taliban as Afghanistan's legitimate rulers, possibly because of pressure from the United States.

Experts say that this could also be the reason behind growing friction between Islamabad and the Taliban.

On Wednesday, the Taliban urged the international community to recognize its government in Afghanistan at a summit in Moscow. But there is still no guarantee that regional and international players will pay heed to the request.

Islamabad has urged global leaders to recognize the Taliban regime, but these efforts suffered a major blow when the Taliban did not announce an inclusive interim government involving different stakeholders and ethnicities.

The group's crackdown on protesters and curbs on human rights have also put Pakistani authorities in a tight spot when pleading Taliban's case to the international community.

In turn, the Taliban feel that Pakistan can do more to convince the world to accept their rule.

Apart from these international affairs, there are some pressing domestic issues that are souring the ties between the Taliban and Pakistan.

Analysts say that some veteran Taliban commanders are miffed that Islamabad is trying to keep the new Afghan regime under control through its backing of the Haqqani Network, which is part of the transitional government.

"In the 1990s [after the Soviet forces left Afghanistan], Pakistan backed Gulbuddin Hekmatyar, a warlord, to control Afghanistan. Now, Islamabad is supporting the Haqqanis, who have been given key ministries in the interim government," Said Alam Mehsud, a Peshawar-based expert on Afghan and Pashtun affairs, told DW.

"This support, however, has angered some Taliban factions," he said.

A former Afghan official told DW on condition of anonymity that senior Taliban commander Mullah Abdul Salem Zaeef, acting Afghan Defense Minister Mullah Yaqoob and many other Taliban leaders are not pleased with Pakistan's backing of members of the the Haqqani Network.

Reports about a tug-of-war among Taliban factions first appeared during the establishment of a caretaker setup in Afghanistan.

The transitional setup suggested that Afghanistan's new rulers were unable to unify their ranks.

Experts say the decision to delegate a senior position to Haqqani is proof that the Taliban did not want to irk the powerful Haqqani Network, which is believed to have become a suborganization of the Taliban in its own right.

"The Haqqanis have sacrificed a lot during the war against the US. They have also been close to Pakistan since the [1980s] Afghan jihad," Amjad Shoaib, a Pakistani defense analyst, told DW.

But Shoaib, who retired as a general in the Pakistani army, insisted that Islamabad also has good relations with other Taliban factions.

Despite Islamabad's historic good ties with the Taliban, many Afghans see Pakistan as a country that interferes in their domestic affairs.

Islamabad has been trying to change this perception by providing crucial aid to Afghans, but some of recent steps have irked the Afghan population.

Latif Afridi, a Peshawar-based security analyst, told DW that the frequent closure of trade routes along the Afghan-Pakistan border is causing problems for many Afghans.

"Pakistan is the biggest market for Afghanistan's agriculture items. The border closures have rendered Afghans' vegetables and fruits rotten and unusable," Afridi said.

"These unilateral measures have dealt a blow to an already-faltering Afghan economy and has angered even those Afghan officials who have historically been pro-Pakistan," Afridi added.

The expert also said the Pakistan International Airlines (PIA) took advantage of the crisis in Afghanistan and sold expensive tickets to Afghan passengers in the aftermath of the fall of Ashraf Ghani's government.

The PIA recently suspended its flights from Kabul, citing problematic behavior of the Taliban officials.

Analysts say that the Taliban also realize that many Afghans are unhappy with Pakistan, hence they have also criticized some of these measures.

The alliance will last

Talat Ayesha Wizarat, a Karachi-based international relations expert, believes that some members of the former Afghan government are trying to exploit these rifts between the Afghan Taliban and Pakistan, adding that Pakistani authorities and the Islamist group need to sit together and sort out these issues.

Sanna Ejaz, an expert on Afghanistan affairs, is of the view that the ties between the Taliban and Pakistan are unlikely to break despite these rifts.

"They [the Taliban] won't turn against Islamabad. The are basically Pakistan's proxies," she told DW.

Ejaz admits that some differences exist between Islamabad and the Taliban, but they are resolvable.