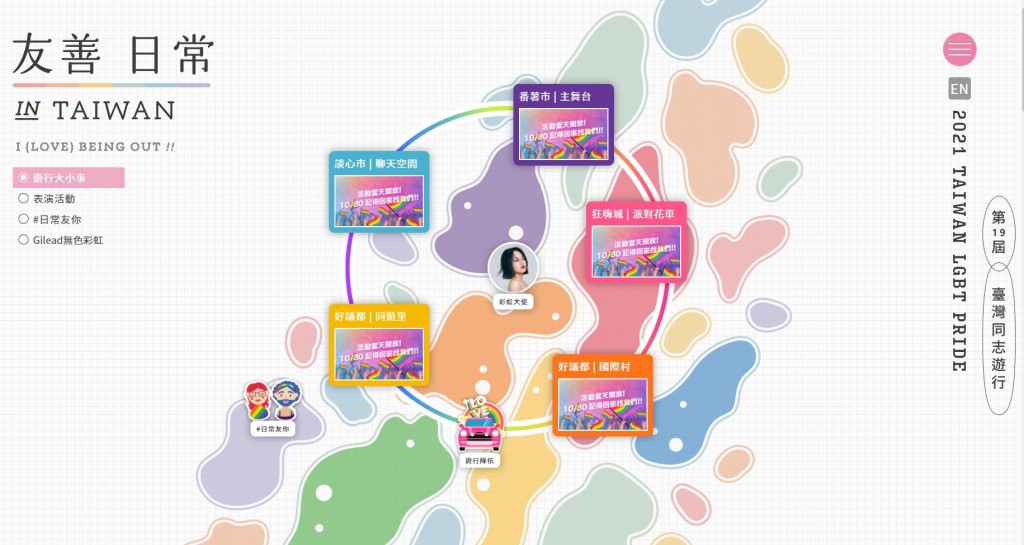 TAIPEI (Taiwan News) — Taiwan’s LBGT Pride Parade, the largest in Asia, will be held online for the first time on Oct. 30, during which participants can “walk” a virtual route, watch stage performances and floats, as well as engage in interactive activities on the official website.

During a press conference, the event organizer, Taiwan Rainbow Civil Action Association (TWRCAA), said that although this year’s parade had to be moved online, the event is designed to resemble a normal parade as much as possible, with innovation in mind.

Singers including Yo Lee (李友廷), Lotus Wang (王彩樺), and this year’s Rainbow Ambassador, Princess Tai (戴愛玲), will be performing at the event, while other celebrities including singers Eve Ai (艾怡良), Ella, and astrologist Jesse Tang (唐綺陽) will also be in attendance. Additionally, LED trucks will follow a traditional parade route, driving through Taipei’s Eastern District, Xinyi Special District, Taipei Train Station, and Ximending on the day of the event so that pedestrians can get a feel of the parade without overcrowding. TWRCAA and its partners pose for a group photo at a press conference. (CNA photo)

TWRCAA said the theme for this year’s parade, “I (LOVE) Being Out,” is designed to promote everyday LGBT friendliness. This is a push to improve social perception of the LGBT+ community, as many people have realized things have not changed since same-sex marriage was legalized, other than a more welcoming social atmosphere.

According to TWRCAA, the parade’s theme in recent years have been designed to educate the public that people in the LGBT+ community can be found everywhere in society, and empathy and respect are the keys to unlocking friendly acceptance of cultural diversity.

“The idea of ‘friendliness’ is not ‘exclusivity,’ it is a space that makes users or customers feel at ease and not a specific protection zone,” said TWRCAA Chair Little Whale (小鯨). “Only when we no longer need to label any specific people, events, places, and things as being ‘friendly,’ does society become truly friendly, he added.