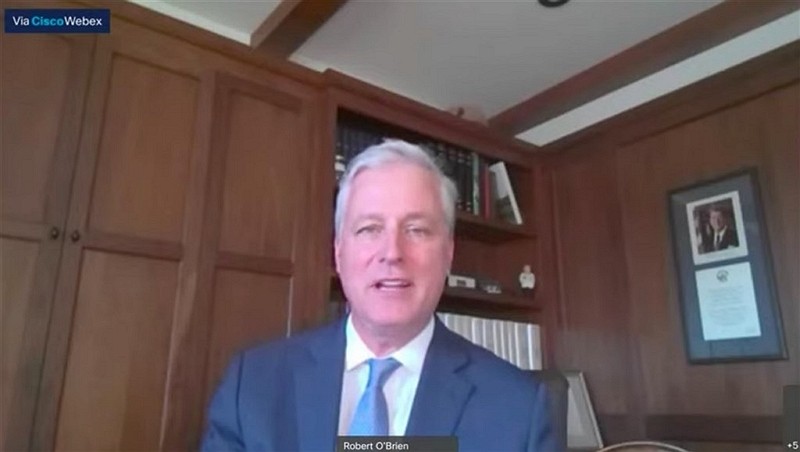 TAIPEI (Taiwan News) — A former U.S. national security advisor is advocating Taiwan’s inclusion in the United Nations, suggesting a U.N. resolution has been misinterpreted to block the country’s rightful access to the international organization.

Robert O'Brien, who served as the national security advisor to former U.S. President Donald Trump, rebutted China’s sovereignty claim over Taiwan on the back of U.N. Resolution 2758. He currently heads a Taiwan-U.S. relations task force at Washington, D.C.-based think tank Global Taiwan Institute (GTI) and made the remarks in a webinar on Tuesday (Oct. 19).

United Nations General Assembly Resolution 2758, passed on Oct. 25 in 1971, recognized the government in Beijing as the only legitimate representative of China. Taiwan was subsequently removed from the U.N.

O'Brien argued the resolution only pertains to the issue of China’s seat in the U.N. He added that any other claims invoking the resolution should be regarded as “part of the Chinese Communist Party’s propaganda and disinformation campaign,” reported CNA.

He made a case for recognizing Taiwan’s success in warding off the COVID-19 virus during the earlier stages of the pandemic and its contributions to global health. He noted that even officials at the White House war room “wore masks manufactured by Taiwan.”

It would be dangerous to continue barring Taiwan from U.N. institutions, he said, which strips the world of the opportunity to learn about the country’s expertise from disaster prevention to epidemic response. The former U.S. official also called upon the Biden administration to send the right signals by granting Taiwan organizations the international status they deserve and ensure unnecessary restrictions on the country will not be imposed.