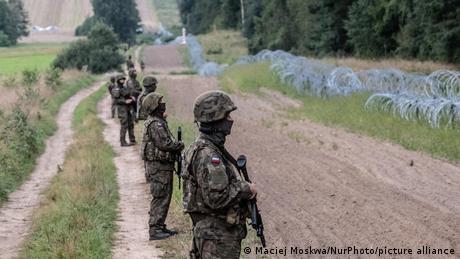 The soldiers would be helping bolster the country's border guard. On Saturday, the troop contingent sat at around 3,000.

"Almost 6,000 soldiers from the 16th, 18th and 12th divisions are serving on the Polish-Belarusian border," Blaszczak tweeted. "The soldiers provide support to the Border Guard by protecting the country's border and not allowing it to be illegally crossed."

Poland is experiencing a surge in migrants crossing from Belarus. Its border guarding agency said there had been 612 attempts on Monday alone. Eleven migrants were taken into custody, with 10 of them coming from Iraq.

The agency has warned those attempting to cross from the Belarusian side that illegal attempts at entry are criminal acts.

Since the beginning of the month, the border guard has recorded 9,600 attempted crossings into its territory.

Earlier in October, the agency said it had prevented 18,300 undocumented crossings since the start of 2021.

A large proportion of those trying to enter the country come from the Middle East. Thousands have tried to cross from Belarus into European Union countries Poland, Latvia and Lithuania in recent months.

Germany offers to lend a hand

Poland's western neighbor Germany has given an offer of assistance with a proposal to send resources of its own.

According to an Interior Ministry letter seen by German news agency DPA, Interior Minister Horst Seehofer has offered to send officers who would take instruction from their Polish counterparts.

The letter addressed to Polish Interior Minister Mariusz Kaminski stated: "Given the joint challenges, I believe it is sensible for both our border protection authorities to again boost their accustomed joint patrols along the German-Polish border."

Seehofer said the patrols should be "primarily on Polish territory, naturally under Polish command."

Poland has accused Belarus and Russia of encouraging the migration to trigger instability within the bloc, calling it "hybrid warfare."

Brussels has alleged that Minsk deliberately organized border crossings in retaliation for sanctions imposed by the EU over the Belarusian regime's suppression of its opposition.

The move prompted thousands to protest on the streets of Warsaw in a show of solidarity with migrants.

Other EU countries also responded to the migrant crisis on Tuesday, with Latvia extending its state of emergency at the Belarusian border and Lithuania calling on the EU to sanction a Belarusian state-run airline.

Correction, October 19, 2021: A previous version of this article misspelled Defense Minister Mariusz Blaszczak's name. We apologize for the error.