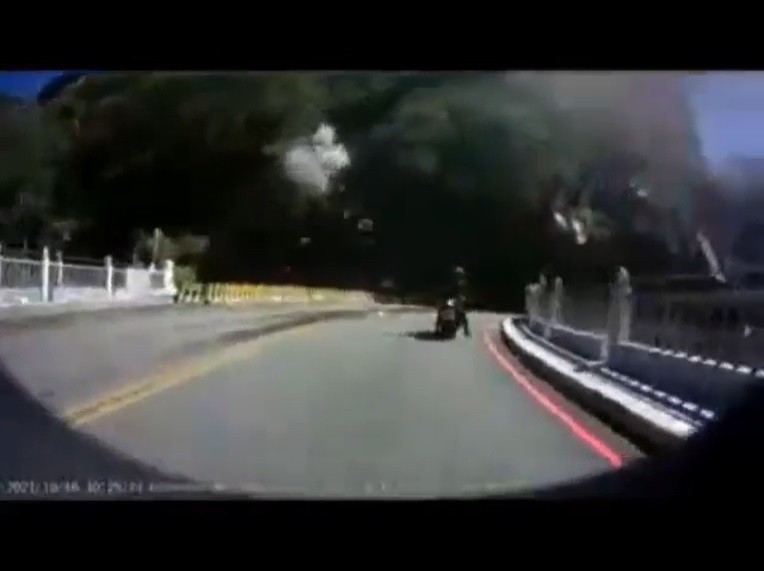 TAIPEI (Taiwan News) — Video surfaced on Saturday (Oct. 16) showing two men knocked off their motorcycles by a sudden rockslide on a bridge in eastern Taiwan, with one of the riders suffering a broken leg.

While traveling along the Cross-Island Highway at 10:30 a.m. on Saturday, a 46-year-old man surnamed Liu (劉) and a 44-year-old man surnamed Huang (黃) had nearly finished crossing the Cimu Bridge in Hualien County's Taroko National Park, when they were suddenly struck by falling rocks. Video of the dramatic incident quickly went viral on social media in Taiwan that day.

In the video taken from Huang's helmet camera, Liu can be seen nearly reaching the end of the bridge and entering a curve when an explosion erupts from the side of a mountain. Liu appears to slow down and places his right leg on the pavement to steady his motorcycle when a flying boulder about one meter in size immediately crashes into his motorcycle and knocks him head over heels. Debris also hurtles towards Huang, who also falls to the side, but he does sustain any serious injuries. When the boulder struck Liu's motorcycle, it smashed into his right leg, shattering his right femur, Liberty Times reported.

Paramedics who arrived at the scene transported them to Tzu Chi Hospital for emergency medical treatment. Doctors said that Liu was fully conscious after the accident and his injuries are not deemed to be life-threatening.

Chen Li-hua (陳麗華) head of the Fourth District Maintenance Construction Office told the newspaper that the rockfall may have been caused by the recent heavy rains in the area. Chen said that aerial drones were flown over the scene of the rockfall to determine what topographical changes had occurred on the mountainside after the rains and will continue to closely monitor the situation.

According to Chen, the heavy rainfall had penetrated into the park's rock formations, increasing the likelihood of rockfalls. Chen advised the public to pay close attention to road conditions when driving through mountainous areas, particularly after heavy rains. 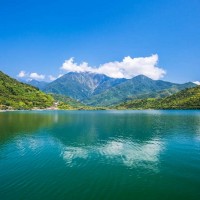 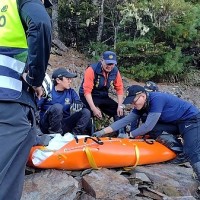