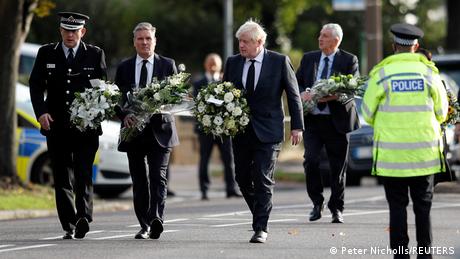 Death threats, hate mail, anonymous phone calls — politicians in many countries need police protection as they carry out their work. Here are some prominent attacks on lawmakers that have occurred in recent years.

Conservative MP David Amess is the second British politician in five years to be murdered. Back in June 2016, Labour Party MP Helen Joanne (Jo) Cox was killed in the run-up to the Brexit referendum. She was fatally stabbed and shot by a 52-year-old man who shouted "Britain first" during the attack. Cox was about to meet with citizens in her constituency when the incident happened.

British Home Secretary Priti Patel said MPs should not be intimidated by the attack on David Amess and that security measures were being put in place to protect them.

"We will carry on… We cannot be cowed by any individual or any motivation... to stop us from functioning, to serve our elected democracy,” Patel said during a visit to the scene of the attack with Prime Minister Boris Johnson.

But, the killing of Amess, also at a meeting with citizens in his constituency, has sparked widespread fear. Labour MP Diane Abbott has said she would prefer to hold future meetings with citizens behind a protective screen. And the sister of Jo Cox, Kim Leadbeater, told the BBC that her partner had asked her to give up her House of Commons seat.

In the Netherlands, politicians are threatened by organized crime and political polarization. They face hate mails and even death threats on social media.

At the end of September, the newspaper De Telegraaf reported that Prime Minister Mark Rutte had been targeted by the "Mocro Mafia,” (Moroccan mafia), a North African criminal organization linked to cocaine trafficking.

Security for the Dutch leader, who normally likes to ride his bicycle to his office, was beefed up.

Prominent investigative reporter Peter de Vries had already taken on these drug gangs. He was fatally shot on a street in Amsterdam earlier this year. De Vries had recently acted as an adviser and confidant to a state witness testifying against an alleged drug kingpin.

In 2002, the right-wing populist politician Pim Fortuyn, known for his controversial positions, was killed.

He had declared that multicultural society had failed and railed against animal protection. He was shot dead by a Dutch environmental activist shortly before the 2002 parliamentary elections, in which he campaigned with the slogan "Vote for me and then you can wear fur coats.”

Germany has been rocked by a series of attacks on politicians in recent years. In 2015, independent candidate Henriette Reker was fallen upon and seriously injured by a man linked to far-right groups in the western city of Cologne a day before she was elected as mayor of the city. Reker survived the attempt to kill her.

Two years later, the mayor of the western city of Altena, Andreas Hollstein, was stabbed and injured by a 56-year-old man in a shop selling Turkish fast food. The man, who was reportedly drunk, ranted against the city's policies of accepting refugees. The food shop's owner and his son managed to overpower the man. Hollstein survived the attack.

A month later, in July 2019, mayors from across Germany held a confidential meeting with German President Walter Steinmeier during which they complained about the growing number of threats, hate mail, and insults they faced and the lack of police protection.

According to Germany's Interior Ministry, a total of 1,534 crimes were committed against politicians and party members in Germany in 2020 — a jump of 9% compared with the previous year.

Police protection is part of everyday life for many politicians in Brazil, both at the municipal level and for deputies and ministers. The largest country in South America witnessed two brutal attacks on politicians before the 2018 presidential elections.

On March 14, Rio de Janeiro city councilor Marielle Franco was shot dead in her car. The politician, a member of the Socialism and Liberty Party (PSOL), had been fighting arbitrary police violence and extrajudicial executions for years. She had been reelected to the city parliament in 2016. Her murder has still not been solved.

The perpetrator of the attack against Brazil's President Jair Bolsonaro, however, has been caught. Bolsonaro was stabbed in the abdomen on September 6, 2018, during an election campaign event in downtown Rio de Janeiro. The assailant, who reportedly holds left-wing views, allegedly declared that he committed the act "at the request of God."

In the US, a polarized society has contributed to the propensity for violence on both sides of the political aisle.

Democrat Gabrielle Dee Giffords was shot and badly injured on January 8, 2011, by a 22-year-old man in a suburb of the city of Tucson in the state of Arizona.

The attack, which took place during a public event, killed six people, including a 9-year-old girl. Giffords retired from politics after her recovery and has since advocated for stricter gun laws.

Republican Congressman Steve Scalise of Louisiana also survived a political assassination. He was shot at a baseball tournament on June 14, 2017. The perpetrator was from the far left. Scalise is considered a Trump supporter and to this day does not acknowledge Joe Biden's election victory.