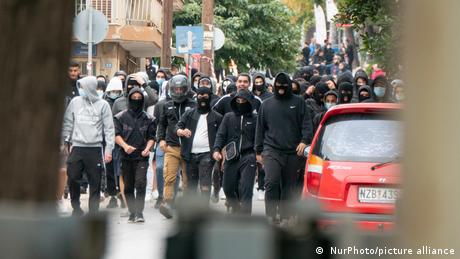 The images from a vocational school in Stavroupoli, a suburb of Thessaloniki in northern Greece, were shocking. On September 27, hooded youths dressed in black used crowbars, knives and stones against peers who had distributed leaflets criticizing the right-wing government's education policies. The attackers later gave the Nazi salute in the schoolyard.

The attack was the first in a series of similar incidents in Greece in recent weeks carried out by groups that are considered to be the successors of the neo-Nazi Golden Dawn party, which was banned in October 2020. In Ilioupoli, another suburb of Thessaloniki, members of the youth organization of the Communist Party were attacked with baseball bats and iron chains in broad daylight. Four were injured. A neo-Nazi parade took place on October 1 in the suburb of Evosmos — and escalated from there.

And it's not just happening in Thessaloniki: people working with refugees, members of the Movement United Against Racism and Fascist Threat (KEERFA), were also recently attacked in the Neo Irakleio district of the Greek capital, Athens.

Konstantinos Tsitselikis, a professor who specializes in human rights and international organizations at the University of Macedonia in Thessaloniki, told DW that the attack in Stavroupoli did not come out of the blue. "Unfortunately, there are far-right groups in many schools," he said. "They are dispersed all over the country, mostly in areas which are economically-deprived, where neo-Nazi groups can easily recruit teenagers. What is worse is that some teachers tolerate this recruitment or even encourage it. It's a phenomenon that needs more attention."

Ten years ago, right-wing extremism in Greece was most visible in the greater Athens area. Golden Dawn members would hunt down people they presumed to be migrants on a daily basis in the center of the capital or the more working-class neighborhoods of the nearby port city, Piraeus.

But since 2018, Thessaloniki has also been a stronghold of the far right. The development was exacerbated by nationalist rallies that took place there against the 2018 Prespa agreement, which was reached to resolve the long-standing political conflict between Greece and the neighboring country now known as North Macedonia.

Tsitselikis is very worried about the rise of right-wing extremism in Greek schools. "Students may be flexible and open to different political ideologies because of their age," he said. "But we need to look for the deeper reasons to explain why it has become an acceptable choice for young people, although there are several alternatives."

He said the familiarity with right-wing extremist ideology observed in Greece and across Europe, in political discourse and the media, was one cause. "The far right is stoking fear of uncertainty, and in my opinion this uncertainty is the source of its strength," he said, adding that there appears to be a growing tolerance of neo-Nazi movements in Europe.

Tsitselikis said after the banning of Golden Dawn and the jailing of its leaders last year, the extreme right had actually gained strength in Greece, even suggesting that the conviction of the party leader and founder Nikolaos G. Michaloliakos and others had paved the way for more extreme groups such as Holy Corps and Propatria.

"The extreme right undoubtedly suffered a heavy blow with the conviction of the leaders of Golden Dawn, but it had to do with the fact that it had been previously legalized in the public sphere," he said, explaining that now that there were no longer any neo-Nazis in parliament, smaller groups who are militantly against democratic pluralism had radicalized even more. "After these changes, Golden Dawn will struggle to survive, whereas many other formations will lay claim to the public sphere and might even aim to create a new political party."

The ruling conservative New Democracy party is attempting a difficult balancing act. On the one hand, it doesn't want to scare away the moderate center-right and even center-left supporters of Prime Minister Kyriakos Mitsotakis' government; on the other, it's also reaching out to the far right.

In the most recent cabinet reshuffle in September, the prime minister appointed as health minister Thanos Plevris — the third minister with a far-right background in the current administration. He joined Interior Minister Makis Voridis and Development Minister Adonis Georgiadis. All three began their political careers with the far-right nationalist Popular Orthodox Rally (LAOS) and continue to act as a link to far-right movements, alongside Migration Minister Notis Mitarachi, a right-wing hard-liner.

Alliance between anti-vaxxers and far-right

There also seems to be a noticeable link between people who oppose vaccinations and far-right militants, said Tsitselikis. Depending on the circumstances, he said, the far right promotes random pseudo-resistance to certain state policies. With regard to COVID-19, right-ring extremists had exploited the ignorance and fears of a large part of the population.

"If there is an obligation to be vaccinated, or those who are not vaccinated seem to be at a disadvantage socially and economically, the response to the vaccine can take on the dimension of a resistance movement with strong political overtones," said Tsitselikis, adding that the leaders of far-right movements had succeeded in imposing their own views on such movements or adopted them as part of a general right-wing extremist ideology.

"People who enter these spaces find protection, an identity and a voice," he said. "This is a dangerous paradigm because it can easily become a central political project that challenges fundamental democratic achievements."