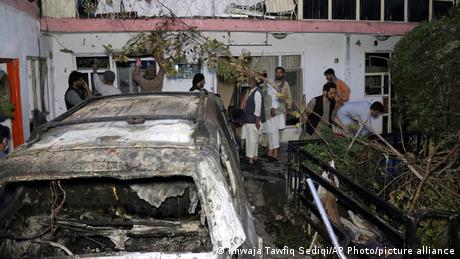 The Pentagon on Friday offered condolence payments for the family members of civilians killed during a botched US drone strike in August.

The US had admitted that the attack killed as many as 10 civilians, including seven children.

The strike was meant to target operatives of the so-called "Islamic State" (IS) terror outfit believed to have been preparing attacks on the Kabul airport.

The exact amount offered has not been disclosed to the public. The US Defense Department said it was working with the US State Department to see if it could also support the relatives who were interested in moving to the United States.

The Defense Department said it made a commitment to the families after it made a mistake, which included offering "ex gratia condolence payments."

Drone strike is 'a tragic mistake'

Pentagon Press Secretary John Kirby said the matter came up in a virtual meeting between Colin Kahl, the US undersecretary of defense for policy, and Steven Kwon, the founder and president of the nonprofit group Nutrition & Education International (NEI).

Kwon had employed Zemari Ahmadi, who was killed after he was wrongly identified as an IS militant by US intelligence.

Kwon told Kahl that Ahmadi had provided "care and lifesaving assistance for people facing high mortality rates in Afghanistan," according to Kirby.

Ahmadi's 22-year-old nephew said last month that a distant apology was not enough. He told the AFP news agency from his house in Kabul that US officials ought to have "come here" and "apologized to us face-to-face."

"Dr. Kahl noted that the strike was a tragic mistake" and that Ahmadi and others who were killed "were innocent victims who bore no blame and were not affiliated with ISIS-K or threats to US forces," Kirby said in a statement, using another name for the IS militant group.

US military officials conceded last month that Ahmadi and others killed in the airstrike had nothing to do with IS.

The US strike in August came three days after an IS suicide bomber killed 13 US troops and several Afghan civilians outside Kabul's international airport.