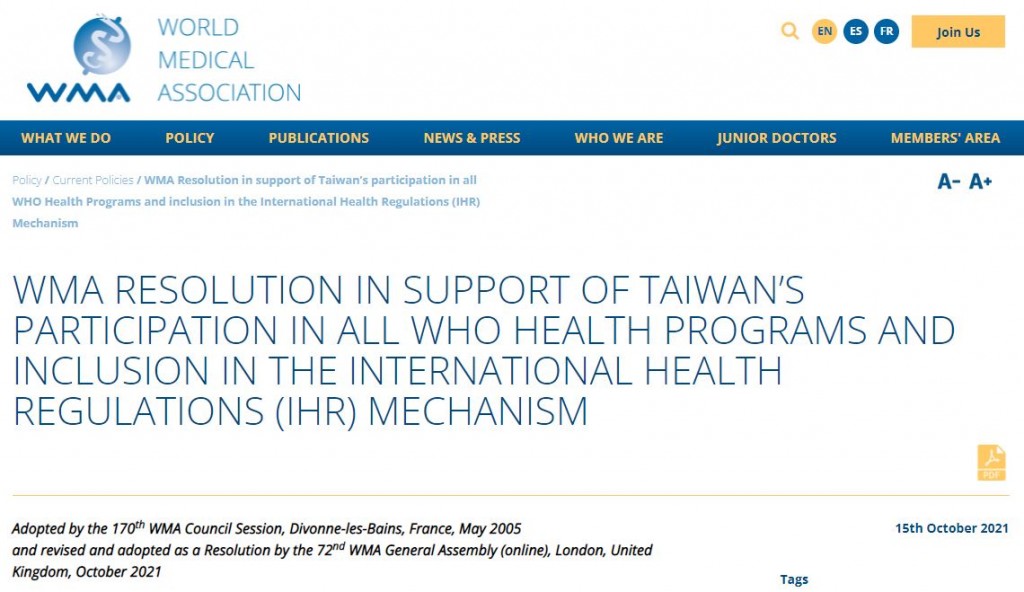 TAIPEI (Taiwan News) — Following the World Medical Association’s (WMA) revision of a resolution supporting Taiwan’s participation in all World Health Organization (WHO) health programs on Friday (Oct. 15), Taiwan’s Ministry of Foreign Affairs (MOFA) expressed its thanks and called on the WHO to remain politically neutral.

The resolution highlighted “the urgency and importance of inclusiveness and leaving no one behind in the global health network.” It called WHO’s exclusion of Taiwan a failure in fulfilling “the principles of universality and equality established in WHO’s constitution as well as the ethical standards of the organization.”

The WMA asked the WHO “to grant Taiwan observer status to the WHA and to ensure Taiwan’s participation in all its health programs.” It also asked the WHO and its member states “to include Taiwan as a full participating party” to the IHR and facilitate timely global health information exchange.

According to MOFA, Taiwan Medical Association (TMA) initially made the proposal, and while the Chinese Medical Doctor Association (CMDA) attempted to thwart it, most WMA members were adamant in their support for Taiwan.

“This positive result represents the professionalism and conscience of doctors worldwide, and demonstrates that Taiwan’s participation in the WHO is truly relevant to important global public health issues,” said MOFA in a press release. “Meanwhile, it shows that Taiwan’s quality medical expertise and successful democratic epidemic prevention model has won international approval,” it added.

MOFA called for the WHO to remain neutral and professional as it works to achieve its principle of protecting the health of humankind. It should “refuse inappropriate political influence, listen to various voices … and invite Taiwan to join the WHA as an observer, as well as fully participate in all WHO meetings, activities, and mechanisms.”