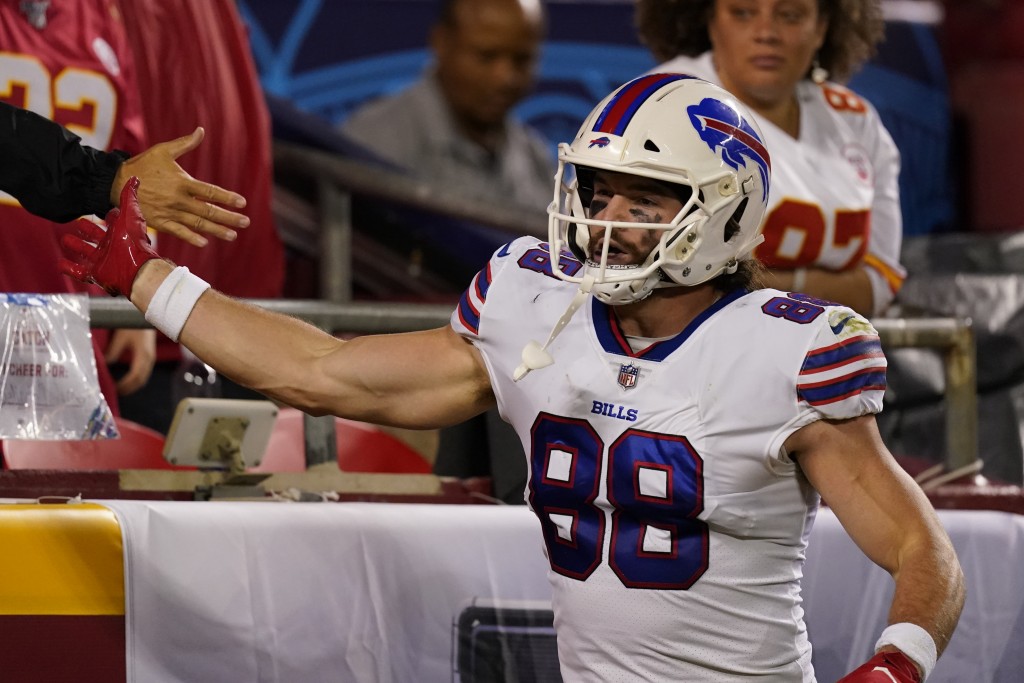 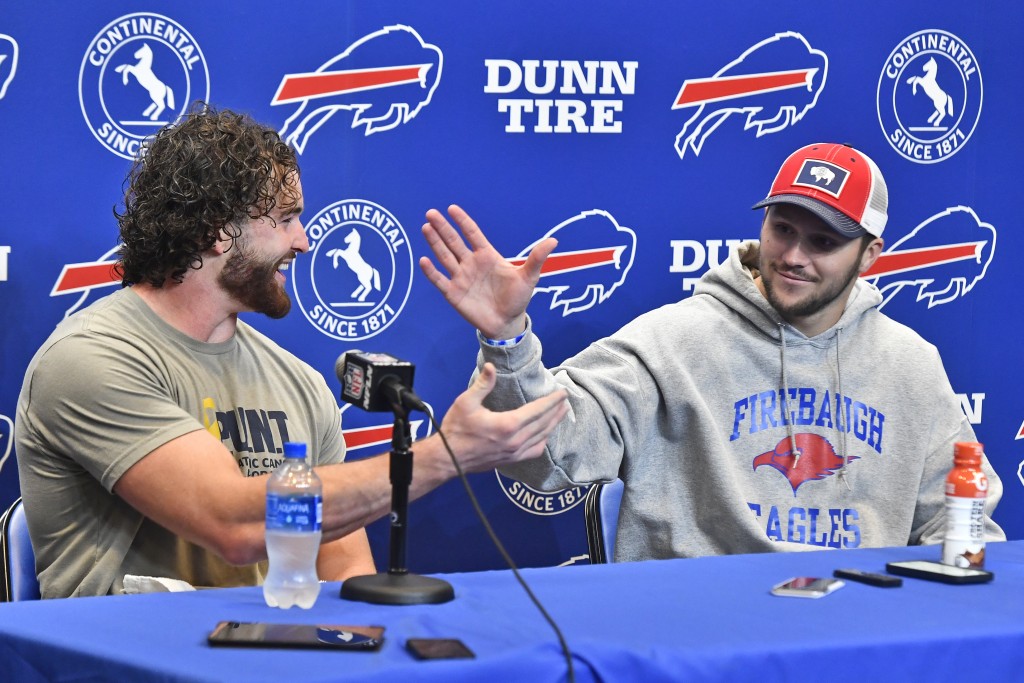 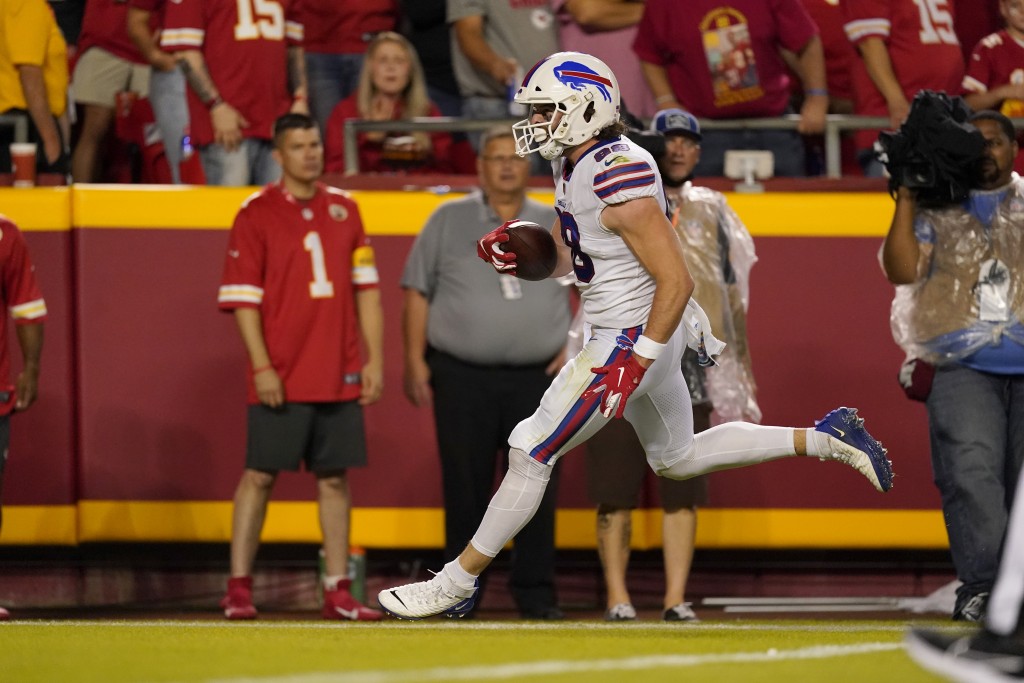 “Just the little things you do start to add up,” Knox said following a 43-21 win over Washington in Week 3, referring to his sudden jump in production.

“The little things you do right start to add up,” interjected Allen, who shared the podium. “This guy does everything right throughout the week, and it’s awesome to play with him.”

Knox turned and thanked Allen for the compliment, before adding: “We need some more prom pics.”

The remark was in reference to the touchdown celebration, called the ‘Prom Pose,’ made famous by comedian Will Ferrell and musical artist Drake, which Knox and Allen debuted earlier in the day.

Forget the prom. The third-year tight end is enjoying a coming out party five weeks into the season with Buffalo (4-1) preparing to play at Tennessee (3-2) on Monday night.

Knox’s five touchdown catches lead Buffalo, are tops among NFL tight ends, and tied for second overall in the league.

He’s Buffalo’s first tight end to score in four consecutive games, with two touchdowns coming in a 40-0 win over Houston two weeks ago. And Knox’s 117 yards receiving in a 38-20 win over Kansas City on Monday night were the most by a Bills tight end since Paul Costa had 163 on Dec. 24, 1967.

And to think, Knox was a walk-on at Mississippi and eventually made the team after making the switch from quarterback to tight end.

“I came into college, I think at like 210 pounds and straight to the scout team and blocking Robert Nkemdiche off the edge,” Knox said, referring to the 6-foot-4, 300-pound defensive tackle currently playing for Seattle. “I was getting thrown around like a rag doll. And if that didn’t put a chip on your shoulder, I don’t know what will.”

Knox remains driven by that memory, of having to eat separately from the team before earning his scholarship, and the frustration of being overlooked coming out of high school outside of Nashville, Tennessee.

With 39 catches for 605 yards over essentially two seasons at Ole Miss, Knox was considered a project and was selected in the third round of the 2019 draft.

He credits his boost in production to a variety of reasons, including the familiarity of being in the same offensive system for three years.

This offseason he visited Allen in California, where they spent their days working on routes and their evenings playing board games. During the trip, Knox also met with a vision performance specialist to work on his hand-eye coordination after dropping four passes last season.

And then there was Knox’s decision to essentially go back to school — Tight End U, to be specific.

Knox was among about 40 tight ends to attend the three-day course in June, and hosted by Kansas City’s Travis Kelce, San Francisco’s George Kittle and former Carolina tight end Greg Olsen in Nashville.

The only difference Allen sees in Knox is a growth in confidence.

“I’ve trusted him ever since I’ve known him, but I think he’s trusting himself now," Allen said. "He’s just making plays. He’s getting open.”

That was evident on how the two connected on Knox’s 53-yard TD catch against the Chiefs. Knox was running up the right sideline and briefly slowed before seeing Allen scrambling out of the pocket. With Chiefs safety Daniel Sorensen’s back turned to him, Knox resumed running and was wide open for catching Allen’s pass.

Including three playoff games, Knox has combined for 44 catches for 504 yards and 10 touchdowns over his past 14 outings. In his first 22 games, he had 37 catches for 512 yards and two scores.

Knox is taking advantage of opposing defenses focusing on shutting down Stefon Diggs, Buffalo’s top threat. Diggs still leads Buffalo with 28 catches for 274 yards, but has only scored once as compared to a team-leading eight last year.

Diggs was joking while agreeing with the suggestion he might be the NFL’s most talented decoy, with Knox getting all the benefits.

“I’m like, `Look, if I’m going to be out there getting you open, I’m going to need some of that check, bro,” he said. “I’m super happy for Knox as far as seeing his potential and being a big target. ... I’ve only been with him for the second year, and Knox has been a baller.”

Knox laughed when informed of Diggs wanting a cut of his pay.

“The day that Diggs needs some money, I’ll be there to help him. No question about it,” Knox said. “But I don’t think that day will ever come.”