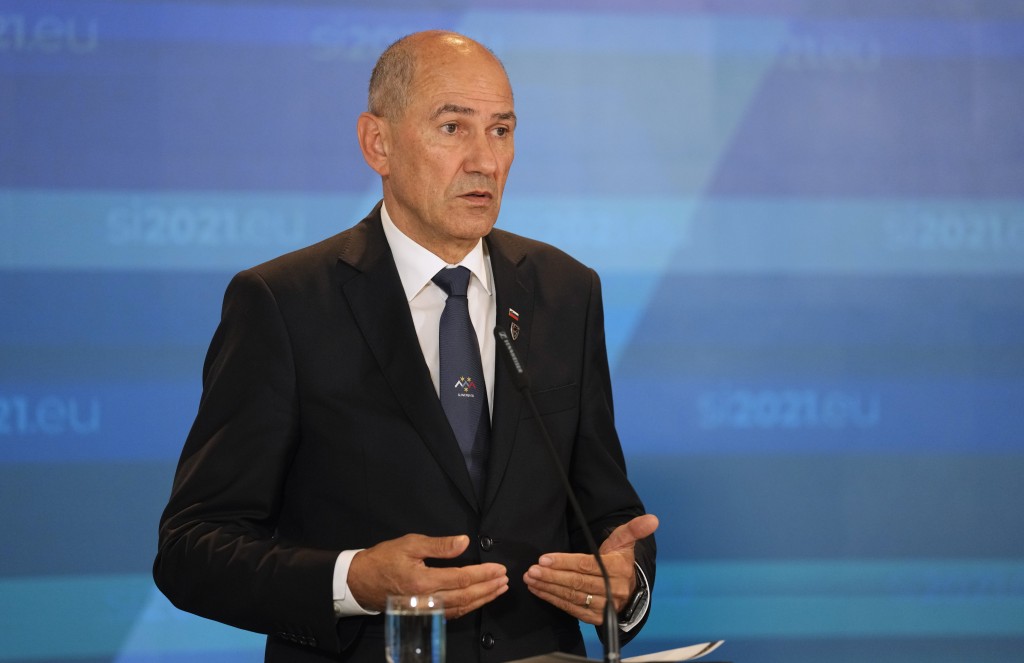 BRUSSELS (AP) — The European Union reiterated Friday that anti-Semitism “has no place" in the 27-nation bloc after Slovenian Prime minister Janez Jansa posted a message on social media that was criticized by some European lawmakers as anti-Semitic.

Jansa, whose country currently holds the rotating EU Council presidency, accused several members of the European Parliament of being “puppets" of George Soros. The Hungarian-American billionaire investor, who is Jewish, has been the subject of anti-Semitic attacks and conspiracy theories for decades.

Jansa made his comments on Twitter during a visit to Slovenia by a European Parliament delegation assessing press freedom and the rule of law in the Balkan state.

“Social media should be a space for constructive and respectful debate," said European Commission spokesman for rule of law, Christian Wigand. “It should not be a place for personal attacks, against individuals, be it private or public figures, as was the case with the tweet you mention."

Wigand added that anti-Semitism is not “only a threat to Jewish communities but also to an open and diverse society."

Jansa was also involved in a Twitter clash with Dutch caretaker Prime Minister Mark Rutte, who said he condemned the “tasteless" tweet “in the strongest possible terms," and that he had conveyed the message to the Slovenian ambassador in The Hague.

Jansa responded by urging Rutte not to “waste time with ambassadors and media freedom in Slovenia" and instead “protect your journalists from being killed on the streets." That was an apparent reference to the murder of crime reporter Peter R. de Vries in Amsterdam.

The EU has repeatedly expressed concerns about media freedom in Slovenia.

Jansa has long been under scrutiny for keeping a stranglehold on the country’s only news agency, STA. The head of the agency has recently stepped down over a new public service contract that would dictate the way it is funded.

Sophie in ’t Veld, the lawmaker heading the visiting EU delegation, said the STA funding should be “addressed urgently.”

Jansa, a nationalist politician with close links to hardline Hungarian Prime Minister Viktor Orban, insists that much of Slovenia’s media is biased against him, but he said in July that the funding issue would be resolved this fall.

Earlier this year. the EU's executive arm condemned Jansa for a series of aggressive comments he made about journalists.

Assessing the country’s democratic standards, in ’t Veld said Slovenia’s institutions are working well. She however said the EU delegation was concerned by the harassment and intimidation, as well as the squeezing of budgets being used “in order to weaken certain institutions.”

She also urged the country to nominate prosecutors to the European Public Prosecutor’s Office that began work in June. Its aim is to independently investigate crimes against the EU budget, such as corruption and serious cross-border value added tax fraud. Slovenia is alone among those countries taking part that has refused to name two prosecutors to the agency.

“We also took note of the delay in the appointment of prosecutors here in Slovenia itself,” in ’t Veld said.