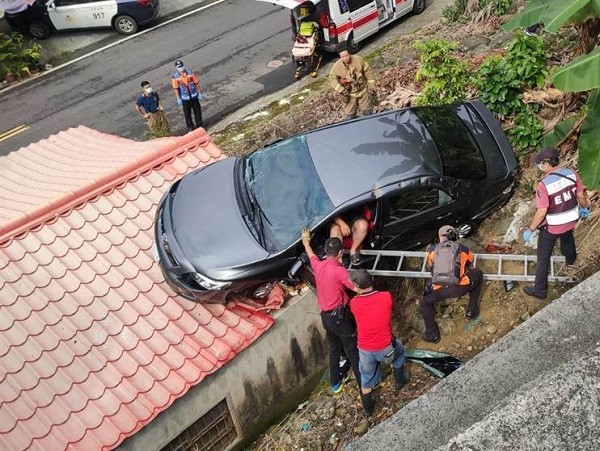 TAIPEI (Taiwan News) — Four tourists searching for a scenic spot on Monday (Oct. 11) found themselves trapped inside their car on top of the roof of a house in Tainan City.

At around 2 p.m. on Monday, a 26-year-old man surnamed Wang (王) was at the wheel of a black sedan carrying four tourists as they went on a tour of Tainan City. Moments before the accident, Wang was using GPS to find a scenic spot in Tainan City's Nanxi District known as Bat Cave Falls (蝙蝠洞瀑布). As he followed the GPS directions on the winding mountain road, Wang noticed the road was "getting smaller and smaller," reported UDN. He decided to try to turn the car around and hit reverse, but the road was too narrow, and the car suddenly slid down a slope, rolled over, and crash-landed on the tiled roof of a home, which prevented the car from continuing to roll onto the road below.

Given the precarious position on the roof, the car's occupants called for help. The Tainan City Government Fire Bureau dispatched five vehicles and 10 firefighters to the scene.

Firefighters arrived at the scene approximately 10 minutes later and were quickly able to extricate the four from their vehicle. Only one person suffered minor injuries, a 24-year-old woman, who was experiencing pain in her left shoulder. The woman was transported to Madou Sin-Lau Hospital to undergo treatment for her injury, reported SET News. After being notified by police about the accident, the owner of the house rushed to inspect his home and was dumbfounded by the scene.

He said that the home is normally not occupied but that it has some appliances inside. He added that he will demand compensation for the damages.

Police believe that poor mobile reception in the mountainous area led to a delay in the GPS data, which caused Wang to drive off course. Officers said that after the car slid off the road, it was the banana trees and house that slowed the vehicle's momentum, possibly preventing more serious injuries.