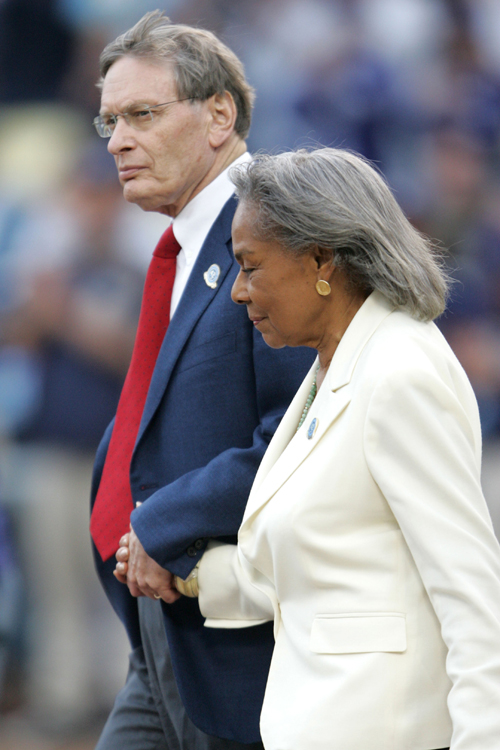 They don't have to dress in the broom closet. They can drink from the same water fountains, eat at the same buffet, stay in the same ritzy hotels, swim in the same pools.
It's almost incomprehensible to imagine the America that greeted and jeered Jackie Robinson 60 years ago Sunday, when he bounded out of the dugout at Ebbets Field and became the first African-American Major League Baseball player of the modern era.
There were racial slurs and despicable letters, flying cleats and death threats, opponents who turned their back on him and Brooklyn Dodger teammates who wouldn't sit near him. We blithely toss around the words "courage" and "hero" far too often these days, but they can't be used enough to describe Jackie Robinson. MLB retired his No. 42 on April 15, 1997, the 50th anniversary of Robinson's major league debut, and temporarily suspended it Sunday, a serendipitous gesture that coincided with yet another hit to the American conscience.
Ken Griffey Jr., was the first contemporary player to push for the movement, to ask commissioner Bud Selig for permission to honor Robinson by wearing No. 42. Griffey, who donned six different jerseys in the Reds' game against the Cubs, told reporters, "I think a lot of people wouldn't be in this locker room if it wasn't for what he did."
More than 200 players and managers joined the tribute, and there was No. 42 on the back of every Dodger when the team played the Padres on Sunday night, and on the Cardinals' Albert Pujols as he tipped his cap, Robinson-style, while crossing the plate after belting a home run, and on C.C. Sabathia as he struck out 10 White Sox and then talked about how he wanted to make sure he represented Robinson's legacy with grace and class.
There was Dontrelle Willis, an All-Star, a 20-game winner, saying wearing No. 42 was "the highest honor I've ever received in my life." There was Chris Young, Padre starter and Princeton graduate, recalling how he wrote his senior thesis on Robinson while sitting in the back of the bus as his Class A team, the Hickory Crawdads, traveled the South Atlantic League roads.
Young took America's pulse by analyzing newspaper reports, both before Robinson broke the color barrier and after. "I observed there was significant improvement in the attitude of the media toward African-Americans. Not from negative to positive, so much, as negative to neutral," Young told ESPN The Magazine. "I excluded sports, but prior to Robinson breaking the color line, you'd see reporters frequently using expressions like 'a Negro hoodlum' in their stories. I noticed coverage that was much more neutral after the integration of baseball."
And there was the Twins' Torii Hunter, pulling his black socks high and dropping into a curling slide as he safely nailed home on the same day his op-ed piece appeared in the St. Paul Pioneer Press. "You don't have to be African-American to know what (Robinson) went through. You've just got to be a smart person or a person who knows what pain is like," Hunter wrote. "For the past 10 years, I've been called the N-word, like, 20 times. Not in Minnesota. In Kansas City. In Boston."
Clearly we haven't yet demolished the racial barrier, or wiped out negative language. Sixty years after Robinson authored the most seminal moment in American sports history, Hunter is still called the N-word, and the Rutgers women's basketball team gets bombarded with hateful e-mails simply because it had the misfortune of being caught in the maelstrom created by Don Imus' nasty mouth.
In August 1945, in a conversation now cemented in American lore, Dodger president Branch Rickey told Robinson, "I know you're a good ballplayer. What I don't know is whether you have the guts."
"Mr. Rickey," Robinson asked, "are you looking for a Negro who is afraid to fight back?"
"Robinson, I'm looking for a ballplayer with enough guts not to fight back," Rickey said, and thus an unspoken pact was sealed.
Robinson altered the complexion of our pastime and forced Americans to understand blacks could be equal with whites. How shocking, how depressing, that 60 years later, not everyone seems to get it.
"The course of history probably would have changed had he quit because he was the smartest of the Negro League players," Hunter wrote. "This was a guy who went to UCLA and played four sports in college. He had an education. If he had quit - the guy who was supposed to be the strongest of the Negro League and the smartest of the Negro League - why go get the others? They wouldn't be able to handle it if he couldn't handle it."
They took No. 42 out of retirement and put it on their backs on Sunday, black and white and Hispanic and Asian players proudly wearing the digits. In clubhouses and stadium seats all across the land, stories were repeated about how Pee Wee Reese, a white shortstop from Louisville, once draped an arm over Robinson's shoulder in a silent show of support. It ought to be Jackie Robinson Day every day.