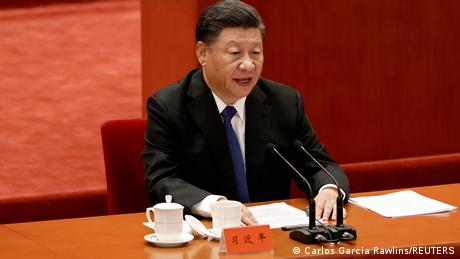 Taiwan split from mainland China in 1949 and views itself as an independent state, while Beijing claims it is a breakaway province.

What did Xi say?

China has a "glorious tradition" of opposing separatism, Xi said at Beijing's Great Hall of the People.

He was attending an official celebration to mark the anniversary of the revolution that overthrew China's last imperial dynasty in 1911.

"Taiwan independence separatism is the biggest obstacle to achieving the reunification of the motherland, and the most serious hidden danger to national rejuvenation," Xi added.

He said that peaceful "reunification" best meets the overall interests of the Taiwanese people. He also stressed that China will protect its sovereignty and unity.

"No one should underestimate the Chinese people's staunch determination, firm will, and strong ability to defend national sovereignty and territorial integrity," Xi said. "The historical task of the complete reunification of the motherland must be fulfilled, and will definitely be fulfilled."

How has Taiwan reacted?

Taiwan's presidential office said on Saturday that the future of the island rests in the hands of its people and that mainstream public opinion is very clear in rejecting China's "one country, two systems" model.

This model permits two systems of governance to be practiced within the sovereign state of the People's Republic of China.

Taiwan's Mainland Affairs Council, in a separate statement, called on China to abandon its "provocative steps of intrusion, harassment and destruction."

How usual is China's call for reunification?

Xi's last major mention of Taiwan was in July when he vowed to "smash" any attempts at formal independence.

In 2019, he directly threatened to use force to bring the island under Beijing's control.

China has not stopped at verbal threats of violence. Beginning October 1, over the course of four days, the People's Liberation Army flew fighter jets, bombers and airborne early warning aircraft 149 times toward Taiwan.

The largest maneuver involved a record 56 jets at once. This was the largest number since Taiwan's Defense Ministry began releasing such reports in September last year.

Xi did not mention the incursions in his speech.