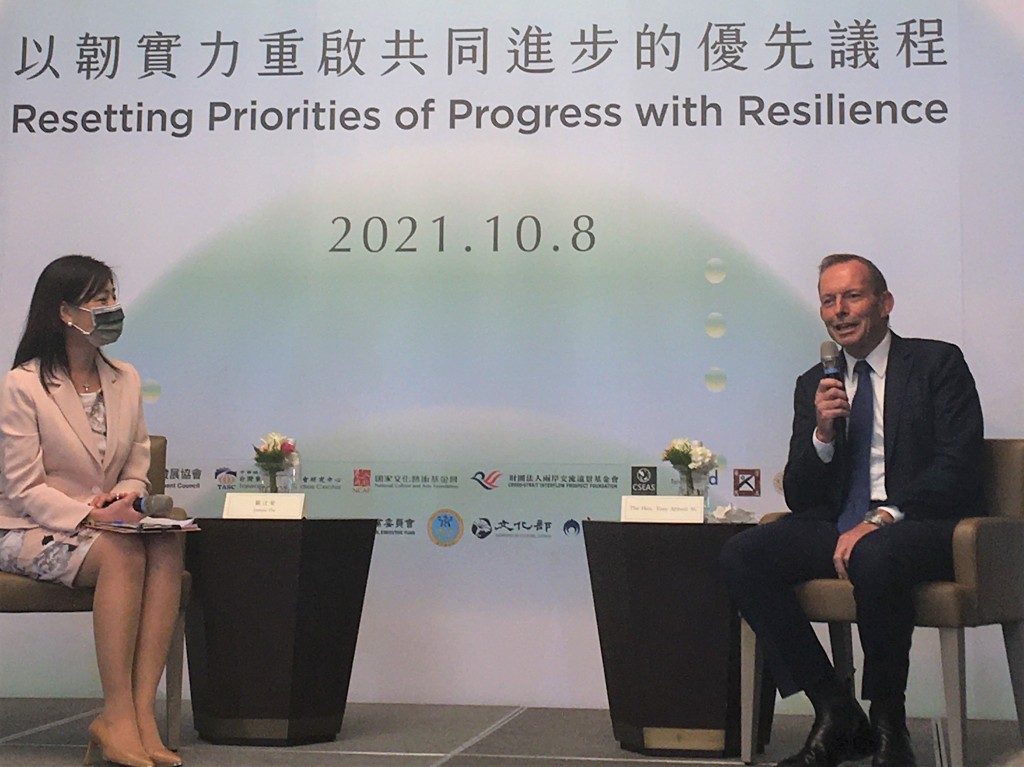 TAIPEI (Taiwan News) — Former Australian Prime Minister Tony Abbott has said that it is vital that Australia does everything it can to support Taiwan during a press conference at the 2021 Yushan Forum on Friday (Oct. 8).

Abbott said that as tensions in the Taiwan Strait increase, one way to boost Taiwan’s international space is by allowing it to join the Comprehensive and Progressive Agreement for Transpacific Partnership (CPTPP). He said that Taiwan is happy to subscribe to the CPTPP’s rules “as they are” and it meets all the criteria required.

He added he does not see any reason a member state would object to Taiwan’s application. He said that members have to decide whether they are prepared to support Taiwan, and if so, whether they plan to support the East Asian democracy rhetorically or practically.

“I can’t think of anything more practical than supporting Taiwan in the CPTPP,” he said, adding that doing so would be beneficial for everyone.

The former prime minister said that Taiwan is a like-minded partner of Australia “in every sense” and pointed out that Taipei is facing a major challenge with China. Thus, “it is absolutely critical that we do everything we can to support Taiwan,” he said.

One thing Australia can do to is to promote the expansion of the CPTPP, Abbott said, adding that with the U.K. also eyeing membership, the trade partnership will not only be a transpacific agreement but a global one.

Abbott said Australia does not want to see a conflict between Taiwan and China and that the best way to avoid this is to let Beijing know that Taiwan has friends. He said that Australia will continue to consult with allies, including the U.S., about what can be done to bolster a rules-based order in the Indo-Pacific and discourage unilateral actions by China.

With regard to Australia’s role in the Indo-Pacific, Abbott said that it is an influential power in the South Pacific, particularly in affairs concerning Papua New Guinea, New Zealand, and Fiji. He added that though Australia has had a long presence in the region, the Morrison government announced a Pacific Step-up initiative to increase security cooperation with countries in the South Pacific, many of which have formal relations with Taiwan.

This could result in furthers consultations and cooperation between Taiwan and Australia, Abbott said.

The former prime minister said that Australia “just wants to be treated fairly by everyone” and engages in mutual relationships. He pointed out that China has not abided by this expectation of reciprocity.

He added that when Australia called for an impartial investigation into the origins of COVID-19, China complained again.

The antipodean country has no intrinsic dispute with China, Abbott said, “but there are many ways that Beijing is treating us unfairly with great aggression.” It is up to the Chinese to put an end to this and to make amends, he said.

Abbott said that he wants Taiwanese to know that “they are not nearly as isolated as Beijing would like them to feel,” adding, “I hope I’ve been able to deploy my 'megaphone' effectively to support Taiwan.”