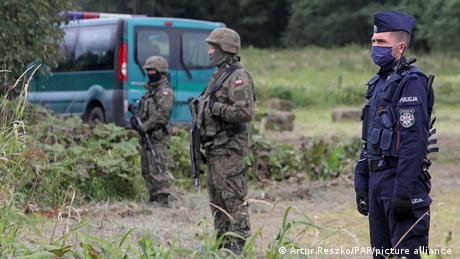 EU member states failed Thursday to commit to a United Nations Refugee Agency (UNHCR) demand for governments to resettle 42,500 Afghans who need protection over the next five years.

Speaking after a EU-hosted online forum, European Commissioner for Migration Ylva Johansson told reporters in Brussels that the target is "doable" but that it requires EU member states to make pledges.

UN High Commissioner for Refugees Filippo Grandi told the EU's high-level forum on providing protection to Afghans at risk that 85,000 people would need protection over the coming five years and that the EU should take in half of that number.

Johansson was insistent that the evacuation efforts of the EU's 27 member states had been successful — noting that EU states had extracted 22,000 people from Afghanistan since the country's takeover by the Taliban.

"I was overwhelmed by the support of the member states" said Commissioner Johansson. "We are right in the middle of resettlement pledges for next year and the member states are ready to increase them."

The European Commission is warning of a "dire situation" in Afghanistan.

"Half of the Afghan population is in need of humanitarian assistance and the economy is at risk of total collapse," said Commissioner Johansson.

The EU Commission put forward a proposal at the forum for a "multi-annual support scheme for Afghans at risk." Further details of what exactly that plan might entail were not provided.

Commissioner Johansson says she is also putting in place a special task force and will host regular forums on resettlement from Afghanistan.

During her annual State of the European Union speech in September, EU Commission President Ursula von der Leyen said the bloc would provide an extra €100 million ($115 million) in funding as part of a new, expanded Afghan Support Package, bringing the total amount of EU humanitarian aid to €300 million.

Set up support for neighboring countries

Members of the European Parliament are vocal in demanding the EU do more to protect people who supported the NATO mission in Afghanistan.

"It is time the EU really lived up to its responsibility" Hannah Neumann, a German Green Party MEP told DW. "We have local staff in Afghanistan, many of our project partners are stuck in Kabul or Pakistan and families are split."

Resettling refugees and migrants has been one of the biggest battles between Brussels and EU member states since the 2015 migration crisis began.

Germany, for instance, has taken in over 1 million asylum seekers from Syria in the subsequent years.

"Compared to the big challenge that we mastered in 2015, even 85,000 people from Afghanistan is not many. This is about humanity and our credibility," said Neumann.

Since the start of the Afghanistan evacuation, EU member states have made it clear that their priority is to help Afghanistan's neighboring countries host displaced people.

An August 31 statement following a meeting of EU interior ministers said, "the EU should strengthen the support to the countries in Afghanistan's immediate neighborhood to ensure that those in need receive adequate protection primarily in the region."

That led a number of NGOs to accuse the EU of outsourcing its responsibility to protect people who had supported EU goals in Afghanistan.

Vit Novotny, a senior research officer from the Wilfried Martens Centre for European Studies, told DW it is of benefit to the EU to support the neighborhood.

"The plan has lots of merits. Those people who would be settled in the neighborhood would have an easy return back home if the situation changes," said Novotny. "With the current state of democracy in the EU — it is tricky to play too much with cultural sensitivities and we can't ignore this factor."