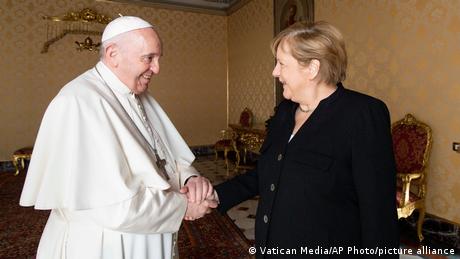 German Chancellor Angela Merkel met with Pope Francis and Italian Prime Minister Mario Draghi as part of a farewell trip to Italy and the Vatican on Thursday.

Merkel told reporters she talked with the pope about politics, world conflicts, climate change and child abuse within the Church during a 45-minute audience at the Vatican's Apostolic Palace.

"Humanity's response to climate change will require a radical change in our way of living," she said, adding that she was encouraged the issue was "being worked on by the Holy Father."

Francis this week joined dozens of religious leaders in appealing for next month's UN Climate Change Conference COP26 in Glasgow to come up with concrete solutions to safeguard the planet.

After the meeting at the Vatican, Francis, 84, gifted Merkel — the daughter of a Lutheran pastor — copies of some of his writings and a miniature replica of the bronze Holy Door of St. Peter's Basilica. Merkel, 67, presented the pope with a book on Michelangelo and a three-volume collection about the gospels.

Merkel: 'The truth must be exposed'

The outgoing chancellor also visited a new institute of the Pontifical Gregorian University, where she met with German Jesuit Father Hans Zollner, the Vatican's expert on measures to protect minors from abuse.

"I wanted to emphasize through my visit that the truth must be exposed and that the issue of child abuse must be dealt with," Merkel said.

The Catholic Church has struggled to confront sexual misconduct by members of the clergy and lay people, a problem that has come to light in Germany, France and several other countries. On Wednesday, the pope expressed "shame" and "sadness" after a major investigation revealed that the French clergy had abused tens of thousands of children over seven decades.

The chancellor faced criticism from struggling eurozone countries at the time for demanding strict economic reforms in exchange for aid. Draghi said he was grateful for Merkel's support of the ECB's independence, "even when we were attacked for the expansionary policies necessary to defend the integrity of the single currency, avert the risks of deflation and support recovery."

"She transformed the role of Germany in Europe. We will miss her, but I am sure that we will see her again in Italy," Draghi said.

Merkel, in turn, described Draghi as a "significant and decisive protector of the euro" currency.

Merkel's visit to Rome comes after her conservative Christian Democratic Union secured fewer votes than the center-left Social Democrats (SPD) in Germany's federal elections in September. Political parties are currently involved in exploratory talks on forming a possible governing coalition, with the CDU set to move into opposition if they succeed. As Merkel toured Rome on Thursday, the SPD was holding three-way negotiations with the environmentalist Green Party and the pro-business Free Democrats.

Merkel is stepping down after 16 years as chancellor, but remains in office until a new government is in place.