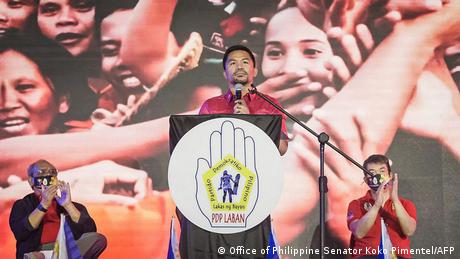 Five candidates have emerged in the Philippines as vying for the presidency in 2022, the most famous of which is boxer Manny Pacquiao.

Pacquiao, who holds the distinction of being the only boxing champion to hold world titles in eight different divisions, announced last month that he would retire from boxing to run for president.

"I will always be a fighter inside and outside the ring," Pacquiao said before announcing his candidacy.

It just might be the toughest fight yet for the boxing champion-turned-two-term-congressman, and now senator.

Pacquiao will be jumping into the ring of presidential hopefuls, which includes incumbent Manila mayor and former matinee idol Isko Moreno and Ferdinand "BongBong" Marcos Jr., the son and namesake of the late dictator who ruled the Philippines under martial law in the 1970s.

"With five presidential candidates, the presidency can be won with less than 30% of the votes," he explained.

LaViña predicts that Pacquaio can bring in votes from his home province of Mindanao, the southernmost Philippine island, and the Visayas central region. Securing votes from these regional voting blocs will give Pacquaio a clear chance at the presidency.

"Voters want to elect someone from their region or province because the president will prioritize these areas and support development projects in their area," LaViña explained.

"Pacquiao can claim an ability to relate to the masses that no other candidate can match," Ryan Songalia, a sports journalist who has covered Pacquiao's career in boxing and politics, told DW.

"What separates him from other candidates is his ability to dominate a news cycle with his boxing fights," Songalia added.

However, sociologist Nicole Curato said the polls are not on Pacquiao's side and it will take more than just a pro-poor platform to win.

"Pacquiao is not the only candidate with that storyline. The challenge for Pacquaio's team is to connect to voters with a different, distinguishing and compelling message. At the moment, it seems his chances are slim," Curato told DW.

The week-long registration process ends on October 8, and there could still be some last-minute additions to the presidential race.

Vice President Leni Robredo, the highest-ranking official of the opposition, could, for example, give in to public clamor and decide to run for the presidency.

Sara Duterte, the daughter of the current president, has consistently topped opinion surveys as a favorite of the presidency but declined running for office. However, political analysts say that she could file a late candidacy in mid-November, just as her father did when he emerged as the dark horse in the 2022 elections.

For voters, there is much at stake in the 2022 elections. The Philippine economy has fallen into its worst decline, which was further aggravated by the dismal government response to COVID-19, which saw Bloomberg News dub the Philippines the worst place to be during the pandemic.

People going to great lengths to register to vote

Due to these issues, Filipinos both within and outside of the country are going to great lengths to be able to cast their votes in this election.

Christine Keiko Tsuji, who lives in the Philippines, queued for 10 hours to register to vote.

The 26-year-old told DW that she regretted not registering to vote in the last 2016 elections. "This time, I told myself it didn't matter if I had to jump through hoops just to register. I want my vote against Pacquaio and Marcos Jr. to count," she said.

Didi Paterno, a Filipino who lives in Dallas, Texas, drove four hours to the nearest Philippine consulate in Houston to register to vote.

"We don't deserve so-called leaders who put on a charade of being concerned about public interest when they steal tax money or refuse to serve the public interest," Paterno told DW. She is also against the possibility of a Pacquiao presidency.

"Does he even understand what it takes to be president? He seems to have a God complex, thinking that he can run the country's sinking ship," she said.