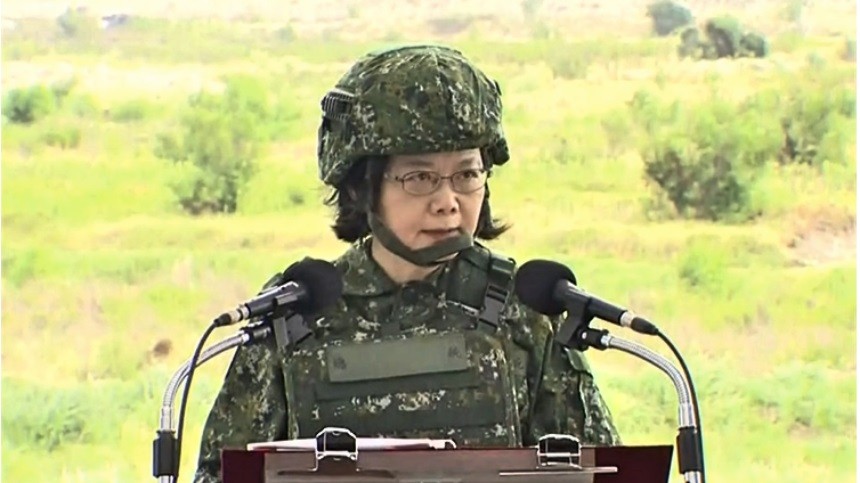 TAIPEI (Taiwan News) — In an article published on Tuesday (Oct. 5), President Tsai Ing-wen (蔡英文) vowed that Taiwan will "do whatever it takes" to defend itself against China as it menaces the country with a record number of warplane incursions.

In a Foreign Affairs article titled, "Taiwan and the Fight for Democracy," and authored by Tsai, she pointed out that China has never given up its ambition of annexing Taiwan. She warned that after many years of double-digit investment in its military and expansionist behavior in the Taiwan Strait, China is "replacing its commitment to a peaceful resolution with an aggressive posture."

She noted that since 2020, there has been a dramatic increase in flights by Chinese military aircraft and patrols by warships in the Taiwan Strait, with intrusions by aircraft into Taiwan's air defense identification zone (ADIZ) occurring on a near daily basis. She added that People's Liberation Army Air Force (PLAAF) aircraft have also on occasion crossed the median line between China and Taiwan.

In spite of these aggressive military actions, Tsai asserted the people of Taiwan have "made clear to the entire world that democracy is non-negotiable." Tsai pledged that "Taiwan will not bend to pressure, but nor will it turn adventurist, even when it accumulated support from the international community."

Nevertheless, Tsai expressed her government's continued openness to dialogue with China, so long as the discussions would take place "in a spirit of equality and without political preconditions." She said that her government is seeking to deepen its understanding of Beijing to reduce the risk of "misinterpretation and misjudgment."

Tsai said that Taiwan is fully committed to working with neighboring countries in preventing armed clashes in the East China and South China Seas. She pointed out that Taiwan lies along the strategic first island chain and warned that if this line was "broken by force," it would lead to a serious disruption in international trade and destabilize the Western Pacific region.

The president, therefore, reasoned: "A failure to defend Taiwan would not only be catastrophic for the Taiwanese; it would overturn a security architecture that has allowed for peace and extraordinary economic development in the region for seven decades."

Tsai added that Taiwan does not seek military conflict, but warned that if the country's democracy and way of life are threatened, "Taiwan will do whatever it takes to defend itself."