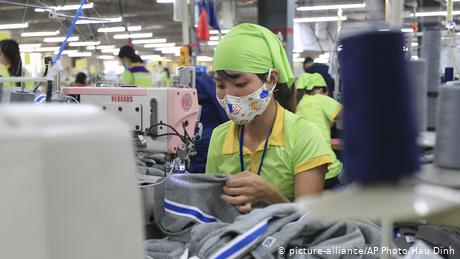 Optimism has been returning for European investors after Vietnam's Communist government began rolling back lockdown measures in mid-September, and the majority of restrictions in the southern business hub, Ho Chi Minh City, were lifted on October 1.

Last year, Vietnam was heralded as one of the few global success stories amid the pandemic. The country of 96 million people recorded just 1,465 infections and 35 deaths in 2020. Its economy grew by 2.9%, one of the few in Asia that expanded.

But infection rates surged in early July, now reaching more than 810,000 cumulative cases. Vietnam has the worst vaccination rate in Southeast Asia, barring conflict-torn Myanmar. It has fully vaccinated just a tenth of its population.

"Clearly the Communist Party was caught off guard by the contagiousness of the COVID delta variant, and it was totally complacent about its vaccine rollout," said Zachary Abuza, a professor at the National War College in Washington.

Factories closed due to worker shortage

To stem the infection surge, Vietnamese authorities imposed harsh lockdown measures. Since early July, most parts of Ho Chi Minh City have been under strict lockdowns, with the military patrolling the streets to stop residents from leaving their homes.

The country's largest city accounts for around a tenth of Vietnam's total population, but 80% of all fatalities from COVID-19 and nearly half of all infections.

Even relatively less impacted parts of the country, including the capital Hanoi and the northern industrial provinces, have faced stiff restrictions over the past three months.

As a result, factories closed due to the shortage of workers and delivery drivers. The service sector ground to a halt. The economy contracted by 6.1% year-on-year in the third quarter of this year, the first quarterly decline since 2000, officials said last week.

Late last month, US giant Apple said the release of its new iPhone 13 will be delayed because of production issues in Vietnam. South Korea's Samsung, which makes over half of its smartphones in Vietnam, had to close several factories earlier this year because of supply disruptions.

A survey of European investors found that around 18% of companies had already shifted some production outside Vietnam and another 16% were considering it, according to the study published in early September by the European Chamber of Commerce (EuroCham) in Vietnam.

Some 83% of German companies active in Vietnam reported supply bottlenecks and price increases caused by transport problems, and two-thirds were considering relocating some production back to Europe, according to a separate survey published by the German Chambers of Industry and Commerce in Vietnam.

But this appears to have been early jitters from European investors, with experts now saying that there won't be any major exodus of foreign companies from Vietnam.

"Some businesses had to adapt and rethink their global supply chain in order to secure their activities. But at this point, it seems just temporary; not a point of no return," said Adam Koulaksezian, executive director of the France-Vietnam Chamber of Commerce and Industry.

Carl Thayer, an emeritus professor from the University of New South Wales in Australia, said Vietnamese authorities recently abandoned their "zero-COVID" policy after they realized it was "unrealistic, if not impossible, to achieve while the delta variant was active."

In an unexpected way, Vietnam's pandemic woes may have also boosted cooperation between the authorities and European stakeholders, allowing for improved trade relations in the coming years.

Following a meeting between EuroCham and the Vietnamese government last month, Prime Minister Pham Minh Chinh was quoted as saying that "Vietnam will continue to listen to the opinions and proposals of the European businesses."

Around a dozen European countries have now donated vaccines to Vietnam, which has also been a major recipient of doses from the multinational COVAX facility, which has received significant funding from the European Union.

On the back of the goodwill shown by European governments, Vuong Dinh Hue, head of Vietnam's National Assembly, toured Europe last month to lobby EU member states to ratify an Investment Protection Agreement agreed in 2019.

Although an EU-Vietnam free trade agreement came into effect in mid-2020, its complimentary investment pact awaits ratification by the parliaments of each EU member state. So far, only a handful of member states have done so.

Also last month, it was announced that a group of European investors are looking to raise $984 million (€848 million) to build a logistics center in the southern Ba Ria–Vung Tau province, which would be one of Europe's largest investments in Vietnam to date.

While the World Bank still expects the Vietnamese economy to grow by 4.8% this year, the Asian Development Bank recently downgraded its growth forecast to 3.8%. Next year, both institutions say the nation's economy will expand by around 6%, near pre-pandemic levels.

National vaccination rates might be low, but they are high in areas where European investors do business. Around 98% of Ho Chi Minh City's population have received at least one COVID-19 jab, says the Ministry of Health. Nearly 94% of Hanoi's adult population had received one shot by mid-September.

Nevertheless, it may take until early 2022 for economic conditions to return to normalcy.

Since the lockdowns ended, many workers have left the industrial zones to go back to their hometowns, said a source with knowledge of government affairs, who requested anonymity.

"Without support and guarantee from the government and companies to make those workers feel secure, there's little chance that they will return to the cities in the next few months," she added.