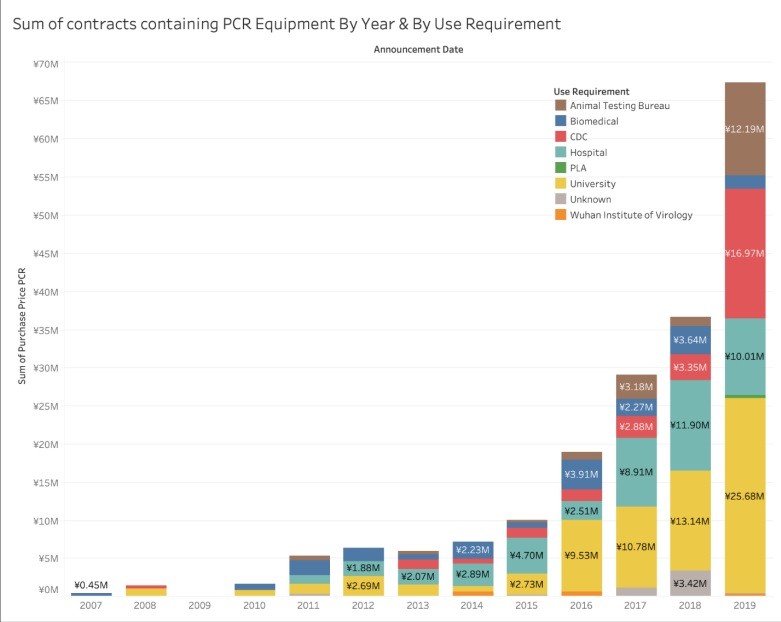 TAIPEI (Taiwan News) — Newly obtained data on purchases of polymerase chain reaction (PCR) tests, which are used to screen for infectious diseases, show a dramatic spike in demand in Wuhan starting in May of 2019, potentially indicating that COVID-19 began spreading in the city much earlier than official Chinese government accounts.

On Monday (Oct. 4), Internet 2.0, an Australia-based company that specializes in digital forensics and intelligence analysis, released a report titled “Procuring for a Pandemic: An Assessment of Hubei Province PCR Procurement Contracts." In an attempt to gain insights into the early stages of the pandemic in Wuhan, the company compared procurement contracts over the past 12 years for PCR tests, the favored scientific method to detect coronavirus infections.

Inputting data from bidcenter.com.cn, the analysts found a dramatic increase in both the total value of contracts and the number of contracts in 2019 over previous years. They also found that purchases increased at an unusually high level for the month of May, possibly indicating that the earliest infections could have been detected in that month.

The study also observed "notable, significant, and abnormal" procurements of PCR equipment in 2019 by the People's Liberation Army Airborne Army Hospital (May 2019), The Wuhan Institute of Virology (WIV) (Nov. 2019), the Wuhan University of Science and Technology (Oct. 2019), and the Hubei Province Districts Centres for Disease Control and Prevention (May-Dec. 2019).

Total procurement prices for PCR tests from 2015 to 2018 saw an annual increase of roughly RMB$10 million (NT$40 million) per year. However, in 2019, the price skyrocketed to RMB$67.4 million, nearly double the RMB$36.7 million spent the previous year. Count and sum of PCR contracts both increased dramatically in 2019. (Internet 2.0 image)

The study also looked at which organizations were making the purchases and found that institutions that would be tasked with dealing with an outbreak of a new virus comprised a disproportionate majority of acquisitions as compared to previous years. In 2019, the Wuhan University of Science and Technology, Wuhan CDC, Hubei CDC, and the Institute of Husbandry and Veterinary Medicine accounted for the lion's share of the purchases.

In terms of purchase by month in 2019, there was a sudden and dramatic increase in purchases by the Wuhan CDC, hospitals, animal testing bureaus, and the People's Liberation Army (PLA). The study's authors believe that this significant increase in the acquisition of PCR tests in May potentially points to the earliest start date for infections.

The month of July saw another significant jump in PCR purchases and was matched by the same number in September, when the Wuhan University of Science and Technology increased buys. The authors noted that this organization, which purchased the most PCR tests in 2019, has 35 teaching practice bases, including 22 general hospitals and 10 disease prevention and control centers.

On Sept. 12, the WIV took its main database of samples and viral sequences offline and has yet to restore online access. On Sept. 21, the Wuhan Hongshan District Center for Disease Control and Prevention announced the requirement of two purchases of pathogen detection equipment for the Military Games at RMB$1.8 million. PCR contracts purchased by month and organization in 2019. (Internet 2.0 image)

The 2019 Military World Games took place in Wuhan from Oct. 18-27, and there have been many reports of athletes infected with a serious illness while in Wuhan for the event. To date, there have yet to be official tests on blood samples taken from the athletes at the time to verify whether they were infected with COVID-19.

A notable November contract was the WIV, which bought a Fluorescent Quantitative PCR Instrument for RMB$308,440, having announced it required the equipment on Nov. 6, 2019. According to an intelligence report obtained by the Wall Street Journal, three researchers at the WIV became sick in November of 2019 with an illness that had symptoms similar to COVID-19, and they sought hospital treatment.

By December, the month when China acknowledges the first cases of COVID-19 were detected, the number of purchases of PCR tests actually declined from the October peak. The main purchasers in December were the Wuhan CDC and animal testing bureaus.

While the lead researcher on the paper, David Robinson, has said the results were not a smoking gun, he believes the timing of the purchases by certain agencies could indicate the Chinese government was concerned about the spread of a human disease many months earlier than has been officially acknowledged, per Bloomberg News.

The paper concludes with "medium confidence" that the substantial increase in the procurement of PCR equipment in 2019 over the previous year was caused by the emergence of COVID-19.