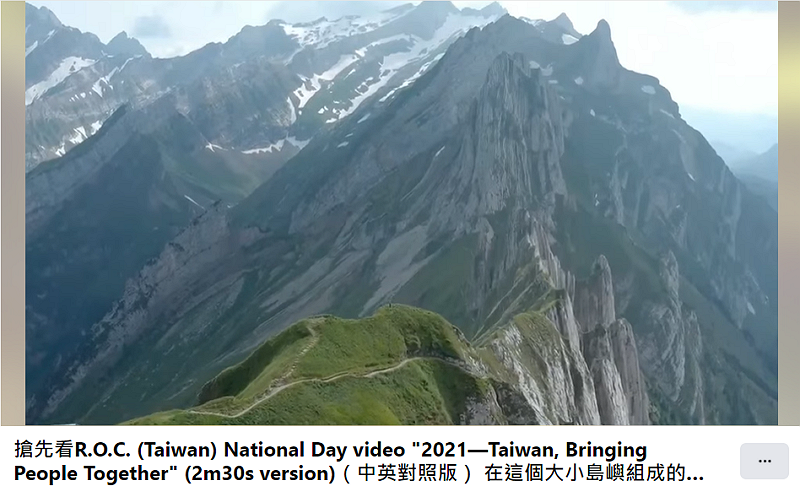 TAIPEI (Taiwan News) — The Ministry of Foreign Affairs (MOFA) is in hot water after a Double Ten Day video released last month was found to have erroneously depicted Yushan, Taiwan’s highest mountain and an iconic image of the country.

Entitled “2021—Taiwan, Bringing People Together,” the six-minute video clip was commissioned by MOFA to introduce to the world the nation’s stories regarding public health, democracy, innovation, and culture.

The clip, though, has invited criticism for an aerial scene that mistook a range of the Alps in Switzerland for the main peak of Yushan, as pointed out by some hawk-eyed mountaineering enthusiasts. A rectified version of the video was uploaded soon after, but the false one is still available in a Facebook post by DPP Legislator Wang Ting-yu (王定宇).

The blunder has drawn public scrutiny over MOFA’s tender process for the project, with some questioning whether the ministry has unfairly favored Alaya Film (阿賴耶電影), a start-up contracted to produce the promotional video. MOFA has apologized over the incident but denied any malpractice during the tendering, wrote CNA.

The incident has also prompted censure from veteran local filmmakers. Director Chen Kun-hou (陳坤厚) blasted the video director for making such a bad mistake, while Lee You-ning (李祐寧) expressed disbelief over what he perceived as substandard filmmaking involved in the work, per UDN.

The rectified version of the video, available in multi-language subtitles, can be found on the MOFA YouTube channel.