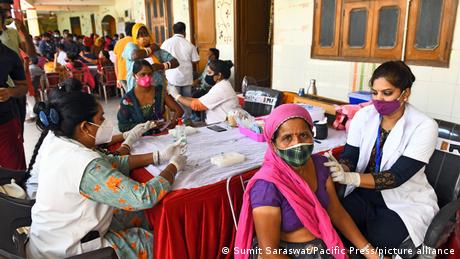 India has seen a significant dip in its coronavirus caseload over the past few weeks. However, health care workers and policymakers are warning of a possible third wave during the winter months.

The R number, which measures the rate of transmission, also went down from 1.17 in August to 0.92 in mid-September. Meanwhile, the capital, New Delhi, recorded just five COVID-related deaths last month, according to official figures.

Some major states have remained pockets of concern. "India is a very diverse country with socioeconomic variations," Dr. Rakesh Varma, a director at the Directorate General of Health Services, told DW.

While New Delhi has recorded relatively few deaths and a low rate of infection, the southern state of Kerala is seeing a high number of new infections, he said.

Approximately 86% of all new infections have been reported by just five states: Kerala, Maharashtra, Tamil Nadu, Andhra Pradesh and West Bengal, with Kerala accounting for 59% percent of all new cases.

"It is hard to predict anything beyond the next 15 days, but there could be a third wave or more," general physician and epidemiologist Dr. Rachna Kucheria told DW. She added that the states of Mizoram and Kerala were hot spots for the virus.

Experts are also concerned about waning immunity. "Let's say we give it about six months or so, which is valid [for immunity to] respiratory viruses. By that count, if we take April as our peak, we are coming into October and that's six months. So even those people who had COVID-19 in April could become vulnerable in winter," Kucheria said.

Though various state governments have allowed celebrations to go ahead with strict protocols in place, experts say festivals give people the license to move around and mingle — conditions in which the coronavirus thrives. Many are worried that the celebrations could contribute to a spike.

"We, as health administrators and policy makers, are scared because people in their religious revelry forget virus-appropriate behavior. Also, in India, festivities don't last for 15-20 minutes — they last for a couple of hours. That's enough time for the virus to transmit from one person to another, and from one person to 10 people," Varma said.

When it comes to India's vaccine rollout, nearly 50% of the country's adult population has received at least one dose.

Some experts are hopeful that the current rate of inoculation coupled with the approval of more vaccines in the future could help in combating the virus.

"India is leading the world on vaccination, not only by manufacturing vaccines but by administering them as well. Three more vaccines are in the pipeline," Varma said.

Other experts, however, are concerned by the low percentage of people who have received a second dose.

"While vaccination is going on, remember that barely 20-25% of the adult population has received two doses, which by default leaves the rest of the population susceptible to the virus," epidemiologist Kucheria said.

India's second wave starting in April this year triggered an unprecedented health crisis that laid bare flaws in the country's health infrastructure and pandemic management. Doctors say that they are now better prepared to handle a surge in infections.

"With the spike that occurred in April, there was a tsunami of patients coming in and these patients required a very special setup. The number of COVID-19 patients coming in was so large that the health system cracked. That is a very huge lesson for us," said Varma.

Due to a comparatively low tally of coronavirus infections in the country at present, doctors say that a sense of complacency may have set in among the general population. Experts have cautioned people against laxity in virus-related protocols.

"This is not the time time to let our guard down," Kucheria said. "Everybody thinks we have had a bit of a break. Hunker down and stay on alert these next few months, because the chance of another wave coming is very high."