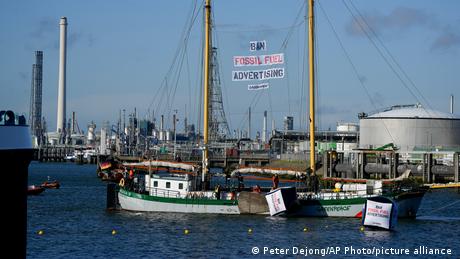 Greenpeace activists on Monday staged a protest that sought to block shipping traffic at a Shell refinery in the Dutch port of Rotterdam.

The demonstration is part of a campaign against what the environmental NGO Greenpeace calls "greenwashing" — misleading advertising by oil companies that portrays them as climate-conscious.

Activists in kayaks, canoes and inflatable boats also formed another blockade on the water.

According to Greenpeace, more than 80 activists from 12 European countries staged Monday's protest.

Shell spokesman Marc Potma said the company supports groups' right to protest "provided this is done in a safe manner."

"However, that is not the case now. The protesters are illegally on our property [in Rotterdam] where strict safety regulations apply," he said.

Rotterdam Port spokesman Tie Schellekens, however, said there was "barely any" disruption to shipping traffic, but openings to some docks had been blocked, affecting two barges.

Around three hours after the protest began, Dutch police were trying to remove the protesters, Greenpeace said on Twitter.

What are they demanding?

Greenpeace and other environmental NGOs are seeking a Europe-wide ban on adverts by fossil fuel companies.

"Fossil fuel companies, car companies and airlines have refused to change their polluting business, but use ads and sponsorships to present themselves as the solution to the climate crisis they caused," said Greenpeace campaigner Silvia Pastorelli.

"We're asking the public to make their voices heard and demand an EU ban on fossil fuel ads," she added.

More than 20 environmental groups are backing the Ban Fossil Fuel Ads campaign. They said they would protest and collect signatures for their cause to put it forward to the European Commission.

"The EU has already introduced a directive banning cross-border tobacco advertising and sponsorships," Greenpeace said in a statement issued in the run-up to the COP26 UN climate conference in Glasgow.

"Now it's time for a similar law against fossil fuel industries for the health of the planet and our future."