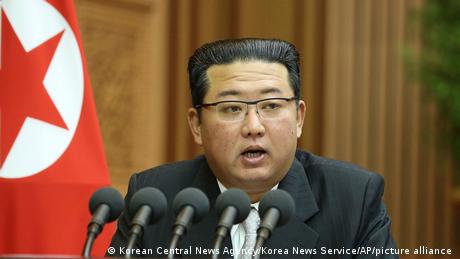 State media in North Korea reported that the country's leader, Kim Jong Un, is open to restoring the emergency hotline with South Korea.

Kim made the comments before the country's parliament, known as the Supreme People's Assembly.

While Kim appeared interested in the hotline between the two countries, he spoke of the South's "delusion" of provocation from the North.

Pyongyang cut the hotline after joint military drills with South Korea and the US in August.

What did Kim say?

According to the Korean Central News Agency (KCNA), Kim said the reactivation of the lines would help "realize the expectations and desire of the entire Korean nation."

Kim also said: "We have neither aim nor reason to provoke South Korea and no idea to harm it."

On the topic of potential threats aimed at Seoul, Kim said: "It is necessary for South Korea to promptly get rid of the delusion, crisis awareness and awareness of getting harmed that it should deter the North's provocation."

Despite the Biden administration's attempts to keep lines of communication open with Pyongyang, Kim said the United States is "employing more cunning ways and methods" in its stance towards North Korea.

"The US is touting 'diplomatic engagement' and 'dialogue without preconditions,' but it is no more than a petty trick for deceiving the international community and hiding its hostile acts and an extension of the hostile policy pursued by the successive US administrations," Kim said.

The US has repeatedly indicated that it is ready to have talks with North Korea, but those attempts at dialogue have been turned down by Kim.

The renewed willingness for communications with Seoul comes after repeated missile tests involving both countries on the Korean Peninsula.

In the latest of those tests, North Korea claimed to have successfully test fired a hypersonic missile on Tuesday.

The US has also said on Tuesday that it had successfully tested a hypersonic missile.

North Korea has defended its testing of weapons before the UN General Assembly and has accused the US of double standards while calling for Washington to abandon its hostile policies;