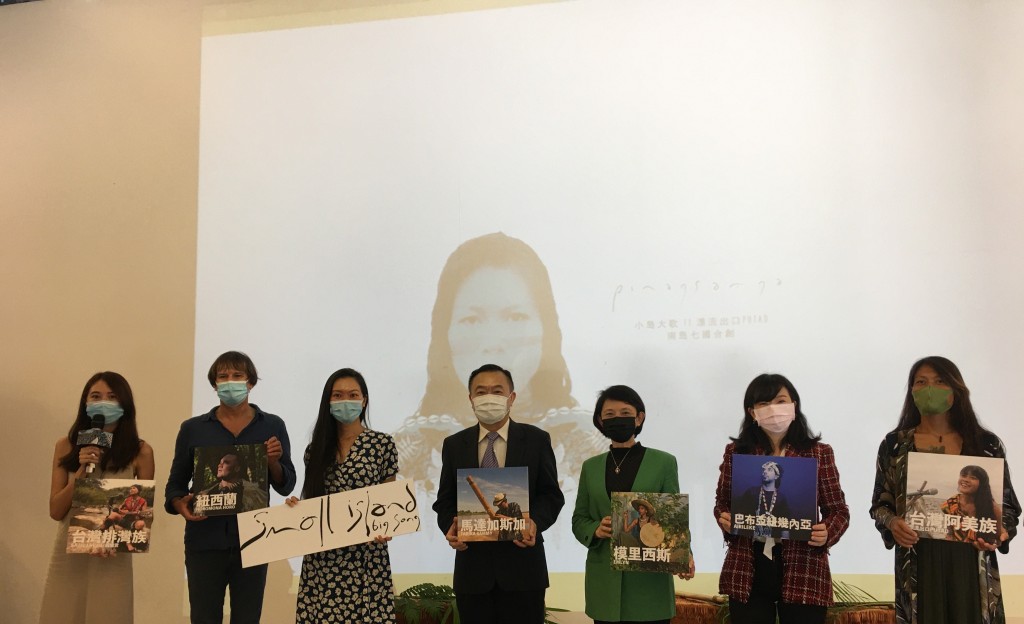 The event was held at the Center for Innovation Taipei at 2:30 p.m., with Small Island Big Song's co-founders Baobao Chen (陳玟臻) and Tim Cole, Putad, and other distinguished guests from the Ministry of Foreign Affairs and the Taiwan Creative Content Agency (TAICCA) in attendance. The song and music video were both released through Small Island Big Song, a multimedia project featuring more than one hundred musicians across 16 island countries in the Pacific and Indian Oceans.

Putad, the lead singer of Outlet Drift, said that the video features themes of respecting nature. She said that she drew inspiration from a near-death experience she had while swimming in the ocean as a child, after which she realized the power of nature.

The singer said that the music video was entirely shot in Taitung and added that Taiwan’s Indigenous tribes and Pacific Islanders are all one big family due to the familial links between the cultures. Putad explained that she consulted with an Indonesian tattoo artist when coming up with the design of her facial tattoo in the single’s promotional poster. She said the rocky beach displayed on her chest is located right near her home and that the millet hanging below symbolized her Amis background, as it is traditionally a vital crop for her tribe. Additionally, the octopus strangling her neck represents nature fighting back as humanity is slowly destroying the planet, Putad said.

In the video, the singer can be seen wearing a traditional tapa cloth, which is a disappearing custom in Amis culture. Since tapa is a commonly used material in the Pacific, it tells the story of her ancestors' migration by the sea, according to Small Island Big Song.

Cole stressed that all the songs released by Small Island Big Song carry ancient stories through language and musical choices, and the Pacific cultures featured in all its songs define people’s relationship with the environment and with each other.

Through the musical project, Chen said she wanted to showcase a cultural facet of Taiwan and its links to other Pacific Island nations. She said that she felt Taiwan was always viewed through a political lens and within the context of China.

With regard to the new music video, Chen mentioned that this was the first time Small Island Big Song had worked with a director. The director, Shih Ting Hung (洪詩婷), whose previous works include music videos for Soda Green’s lead singer Wu Tsing-Fong (吳青峰) and Icelandic indie band Of Monsters and Men, brought a lot of inspiration and creativity to the video shoot, Chen said.

Shih said that she was touched by the amount of respect and love for nature expressed in the songs and by the musicians involved in Small Island Big Song. She also said that she admired the mix of cultures and wanted to help showcase Taiwan to the world in some way, which is why she decided to get involved with the music video.

The director stressed the importance of loving and taking care of nature and the earth.

Alice Chang (張文櫻), deputy dean of TAICCA, said that it has always been the mission of the agency to share Taiwan’s rich local culture with the world in various ways. Taiwan is the origin of all Pacific Islander cultures, she said.

The Small Island Big Song Project, which is supported by TAICCA, was established in 2015, when Chen and Cole quit their jobs upon hearing about the impact of rising sea levels on island countries. They were inspired to create “a contemporary and relevant musical statement of a region in the frontline of cultural and environmental challenges,” according to the project’s Facebook page.

The project’s works have gained recognition from many European and American awards. Additionally, the Austronesian language group has been brought closer together through this transnational music project, which has never been attempted before.