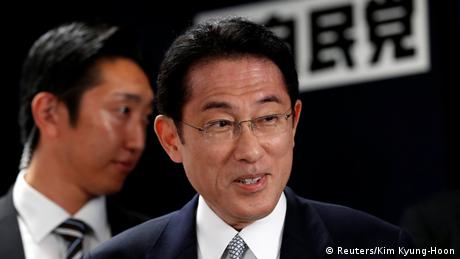 Japan's minister for vaccines and reform, Taro Kono, is way ahead of his rivals for the job as head of the country's ruling Liberal Democratic Party (LDP) when party members and its elected politicians vote on Wednesday, according to opinion polls.

Despite that popularity, analysts believe that quietly agreed pacts and promises between the party's rival factions will ensure a different outcome.

The election of party leader was forced upon the LDP by the recent announcement by deeply unpopular Prime Minister Yoshihide Suga that he would not stand for reelection after just a year in the job.

Whoever wins the party leadership vote will also assume the post of prime minister, at least until a general election is held later in the year, with early November the most likely date.

Kono, who has previously served as defense and foreign minister and has established a reputation as a blunt-speaking politician who gets things done, had the support of about 45% of the general public in a poll conducted over the weekend and, more importantly, more than 47% of party members with a vote.

In contrast, former Foreign Minister Fumio Kishida had 22% of rank-and-file party members on his side, while 16% were backing Sanae Takaichi — an ardent nationalist who revels in the reputation of Japan's "Iron Lady" — and a mere 3% were supporting Seiko Noda, the party's acting secretary general.

Political analysts say that an unprecedented two women running for the post of prime minister is a generally positive development for Japanese politics — which has never seen a woman in the top position — but the sense is that a party as deeply conservative as the LDP is not yet ready for a female leader.

That will whittle the choices down to the two male candidates, Kono and Kishida. And even though Kono has, on paper, double the support of his rival, the party's two-stage voting system means that he is likely to miss out.

"I do not expect a clear winner to emerge from the first round of voting, so the candidates will be reduced to two and I see it as a duel between Kono and Kishida," said Koichi Nakano, a professor of politics at Tokyo's Sophia University.

"And even though Kono is clearly the most popular with party members and the general public, the second round of voting is only for politicians, and I expect the factions who previously supported Takaichi or Noda to switch to Kishida," he told DW. "At this stage, I would be very surprised if Fumio Kishida does not win."

Different interests behind the scenes

Kishida's victory is being managed by the "old guard" — such as former Prime Minister Shinzo Abe and present Finance Minister Taro Aso — who wield vast amounts of behind-the-scenes power, despite efforts by some to modernize the institution. And they see Kono as too middle-of-the road — or even progressive — in many of his policies.

"The old guard wants to keep everything as it is, and Kono is seen as part of a younger generation of politicians who would like to change the party," Nakano said.

"They want Kishida to take over because he would be an easier puppet for them to control," he claimed.

Kishida and Abe both entered politics at the same time, after the 1993 election, and have remained close throughout their careers, he said, pointing to Kishida's "unfailing loyalty" when Abe was prime minister.

Kono, on the other hand, has a very different personality and "would be far more difficult to control," he added.

Perception of politics as a 'man's job'

Hiromi Murakami, a professor of political science at the Tokyo campus of Temple University, agreed that while a woman is unlikely to win the party election, the positive showing of Takaichi has been "surprising."

"Many analysts did not expect her to remain this competitive so late in the race, but it looks as if she has managed to stand out with policies that have the support of the far right of the party," she said.

Those policies include support for Japan developing nuclear submarines, expanded military spending, greater resources devoted to protecting outlying Japanese territory from foreign claims — notably from China — and reiterating "family values" policies that resonate with conservatives, such as opposing proposals for women to be permitted to retain their maiden name after marriage.

Ultimately, however, the perception that politics is a "man's job" among the vast majority of party members and politicians means that Takaichi will not win the vote — although her candidacy may well serve to pave the way for more women to stand at all levels of politics across the country, Murakami said.

"For ordinary people, the biggest day-to-day concern is still the coronavirus pandemic and the employment and broader economic problems that it has caused over the last 18 months or so," she said.

With Suga's popularity collapsing from more than 60% when he first took office in September last year to below 30% in the most recent polls, the incoming LDP leader can expect a substantial "new leader" bump at the ballot box in November.

"Whoever comes in is going to be a big change and the party should no longer have to worry about being badly damaged in the upcoming election," she said. "If the new leader can get across his hopes and expectations and have a bit more charisma in front of the public, then the LDP should easily be able to win the most seats."