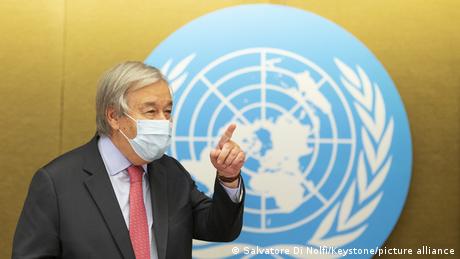 The UN representatives for Afghanistan and Myanmar were dropped from the list of speakers who were to address world leaders on Monday, the last day of the UN General Assembly in New York City.

Both the Taliban in Afghanistan and the military junta in Myanmar had written to the UN secretary-general to say their representatives to the United Nations were appointed by governments that were no longer in power.

Diplomats told news agency AFP that Washington, Beijing and Moscow appear to have brokered the move to drop each of the countries' representatives from speaking at the general debate session.

The three countries are part of a nine-member committee that decides on whether an appointed person has the credentials to represent the country at the global body.

Afghanistan's ambassador to the UN was on the speakers list until late Sunday evening. He was dropped Monday morning.

Why did this happen?

Ghulam Isaczai, Afghanistan's representative to the UN, was due to speak to leaders on Monday. He was to give a speech in defiance of the Taliban who seized control of the country in August.

The hard-line Islamist group asked for their newly appointed foreign minister, Amir Khan Muttaqi, to be allowed to "participate" instead. But diplomats said the request had come in much too late for the committee to decide. Isaczai's name was on the speakers list that went out late Sunday evening.

Monica Grayley, a spokeswoman for the assembly's president, told AFP that Afghanistan "withdrew its participation in the general debate," without citing a reason for withdrawal.

What happened with the Myanmar representative?

Similarly, Myanmar's Kyaw Moe Tun, who was chosen by the country's ousted government, was scheduled to give an address on Monday as well. Myanmar's de facto head of government, Aung San Suu Kyi was ousted in a coup in February.

The military junta said in a letter to the UN in July that it had appointed Aung Thurein, who left the military after serving 26 years, as Myanmar's ambassador to the UN.

The international body has not yet approved the appointment of the former general. Kyaw Moe Tun has the support of the international community and has retained his seat at the UN.

UN spokesman Stephane Dujarric confirmed last Friday that Myanmar would "not be speaking" at the general debate.

Kyaw Moe Tun was also the victim of a recently foiled assassination plot to either force him to resign, or be killed if he refused to do so.

Tun had told AFP that his plans for the General Assembly were to keep a "low profile." Tun has been an outspoken supporter of democracy in Myanmar.

The committee is expected to vote in November on which of the competing delegations will represent Afghanistan and Myanmar at the UN.

The UN General Assembly, which was attended by world leaders virtually last year amid the coronavirus pandemic, saw more than 100 heads of state gather in person this year.