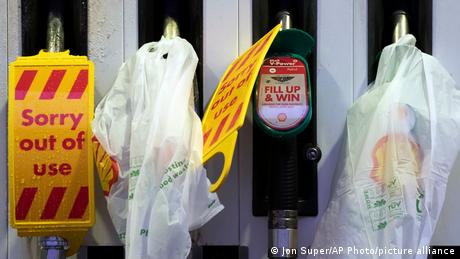 Britain's Petrol Retaillers Association said that two-thirds of gas stations it represents had run out of fuel on Sunday.

Panic buying exacerbated a supply crisis triggered by a post-Brexit shortage of truck drivers who would normally deliver the fuel to the pumps.

Cars lined up at gas stations in major British cities for a fourth day as retailers warned the crisis could batter the world's fifth-largest economy.

The UK environment ministry said the country was not facing a real fuel shortage, but that the disruptions were only at the points of delivery due to consumers buying up fuel they didn't need.

"The most important thing is that people just buy petrol as they normally would. There isn't a shortage," environment minister George Eustice told journalists.

"There does come a time when things settle down, people get used to it and return to life as normal again. The quicker people do that the better... The only reason we don't have petrol in forecourts is that people are buying petrol when they don't need it," the official said.

It comes just a few days after UK Prime Minister Boris Johnson's government spent millions of pounds to avert a food shortage due to a spike in the prices of gas and byproducts. The country's officials repeatedly asked people to refrain from panic buying.

Johnson's spokesperson on Monday said his government was not complacent, and vowed to take the necessary steps to help deliver fuel to petrol stations.

"What we are doing as a responsible government (is) taking the preparatory steps necessary should any further measures be
needed," the spokesperson said.

The army may get involved

To tackle the crisis, the government announced it is temporarily suspending competition laws so fuel firms can share information and target areas with low-supply areas.

UK media widely reported Johnson is considering whether to call upon the army to help deliver fuel.

According to Eustice, the government is also bringing in military driving examiners to clear a backlog of new truckers awaiting tests. Britain is struggling to cope with a shortage of around 100,000 truckers, according to the haulage industry.

Eustice said "we've no plans at the moment to bring in the army to actually do the driving.''

"But we always have a civil contingencies section within the army on standby,'' he added.

How is the UK tackling the driver shortage?

The truck driver shortage — which occurred as a a result of the pandemic, an aging workforce, an exodus of foreign workers and unfavorable work conditions — led to a series of unforeseen outcomes following Britain's departure from the European Union last year.

The government said it would issue 5,000 three-month visas for truck drivers starting in October, and another 5,500 for poultry workers. But that falls far short of the number needed, according to the Confederation of British Industry.

Representatives of European truckers are also skeptical that drivers would want to come to the UK on visas that would expire on December 24.