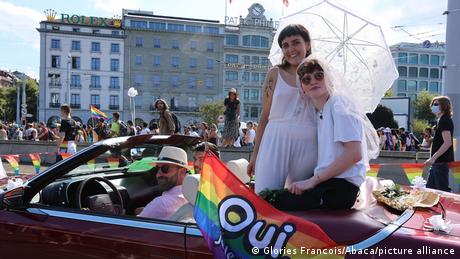 Switzerland is one of the last nations in Western Europe to ban same-sex marriage.

That could change on Sundaywhen voters decide if they should extend gay and lesbian couples the same rights as their heterosexual counterparts.

The Swiss parliament alreadylegalized marriage for all last December, but a group of conservative Christian parties pushed for the decision to be revised in a referendum. Opinion polls suggest the decision is set to pass, but the race is getting closer.

What exactly would same-sex marriage change?

Same-sex couples in Switzerland have been able to enter into civil partnerships since 2007. That gives them the same tax benefits as married people, for example, but withholds other rights from them.

With the right to marry, same-sex couples would be able to adopt children that are not of either spouse. Lesbian partners would be allowed to use a sperm donor in Switzerland, and both be recognized as mothers of the child. It would also make it easier for foreign residents to become citizens if they were married to their Swiss partners.

"I think it would be a step toward modernity," Matthias Erhardt, a Geneva City Council member, told the Associated Press news agency. "For us LGB people — lesbians, gays and bisexuals — it’s our entire life, our life plan, that’s at stake."

Many same-sex couples also oppose civil unions because it forces them to disclose their sexual orientation any time they have to specify their marital status, for example, when job or apartment hunting.

Why is the decision up for a referendum?

Representatives from right-wing parties like the Federal Democratic Union of Switzerland and the Swiss People's Party, among others, opposed the parliamentary decision to legalize marriage for all. They raised the necessary signatures, at least 50,000, to have it revised by a referendum.

Much of the debate revolves around LGBTQ couples' right to raise children. The committee and its supporters claim marriage equality will eliminate the father role from families.

"If the law is adopted, we are going to introduce into Swiss civil law a new institution — that of the child without a father," Yves Nidegger from the Swiss People’s Party told AP.

"Two women or two men who want to conceive a child, even if they love each other very, very, very much, that’s just not the way children are created."

The ad even shocked some people on the same campaign and the city of Geneva refused to show it.

What about the rest of Europe?

Granting marriage equality would put Switzerland on par with most Western European countries.

Germany and Austria were among the last, legalizing gay marriage in 2017 and 2019, respectively.

If the referendum passes, Switzerland will be the 30th country in the world to allow same-sex marriage.