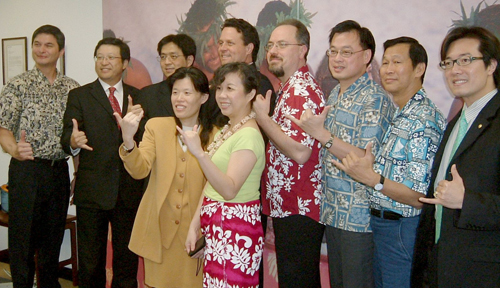 Hawaii tourism is getting a boost with the China Airlines, or CAL, adding another weekly direct flight from Taipei every Tuesday. CAL used to fly direct to Hawaii only on Thursday and Sunday but on March 27 added another nine-hour flight every Tuesday.
Since 1975, CAL has maintained five flights via Tokyo for the Hawaii route, making a total of eight flights a week for the convenience of travelers from Taiwan.
The new Chinese-language Web site www.cihawaii.com.tw was launched in Taipei yesterday to stimulate Taiwanese tourists' interest in visiting the romantic state. Go online and find links to the homepage of Hawaii Tourism Taiwan, China Airlines, and the 12 travel agents in the "Fall in Love in Hawaii" promotion.
Hawaii State officials present at a conference yesterday included Mark Anderson, Hawaii State Department of Business, Economic Development and Tourism deputy director, Alex Lei, Hawaii state representative in Taiwan, and Jemy See, Hawaii Tourism Asia representative in Taiwan, Hong Kong and Southeast Asia.
"The additional direct flight has made it easier for tour operators to offer a seven-day tour package to Taiwanese tourists," said Charles Hsu, assistant manager in the passenger sales department of CAL's Taipei Branch Office. "In fact, 12 tour operators in Taiwan have gotten together to promote Hawaii tourism."
One seven-day tour package being pushed by these agencies includes a stay at the conveniently located Pacific Beach Hotel on Waikiki Beach. A ride on the famous Love Boat, a visit to the Polynesian Cultural Center and a tour of the Dole Pineapple Plantation are highlights.
Hawaii is more than just the land of the hip-swaying hula dancers. The tourist destination captures the imagination as the scenic setting where movies like "Jurassic Park," "Godzilla," "Mighty Joe Young," and "50 First Dates" were filmed.
Gregory M. Wong, the commercial section chief at the American Institute in Taiwan, stepped forward yesterday to encourage Taiwanese tourists to visit the beautiful state where his ethnic Chinese father was born. After growing up in the continental U.S., Wong himself went to live in Hawaii and now keeps a home there.
Wong said that the number of Taiwanese applications for U.S. visas reached 200,000 last year and less than two percent were denied. The AIT would like to see more Taiwanese people travel to the U.S., he said.