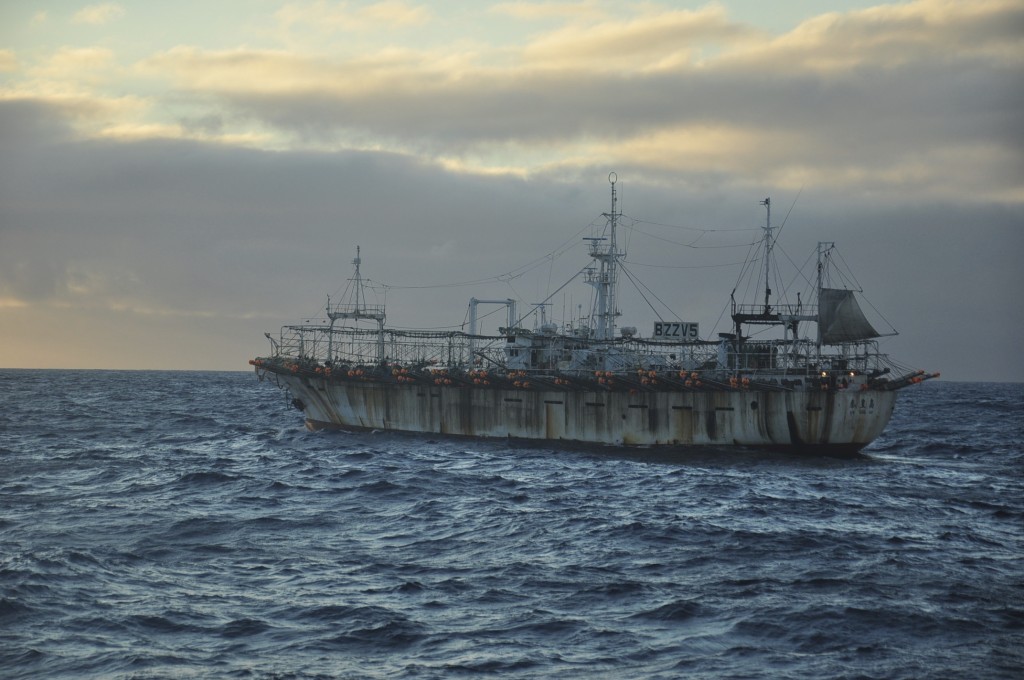 The Associated Press with Spanish-language broadcaster Univision accompanied the conservation group Sea Shepherd this summer on an 18-day voyage to observe up close for the first time the Chinese distant water fishing fleet on the high seas off South America. China’s deployment to this area of the Pacific Ocean is no accident. Decades of overfishing have pushed its overseas fleet, the world’s largest, ever farther from home. U.S. and regional governments fear that the Chinese fleet’s push into the Americas could spur illegal fishing of endangered species and threaten even thriving ones like the Humboldt squid, the main target of the explosion in industrial fishing off South America.

Here are some key takeaways:

1. Of the 30 vessels the AP observed up close, 24 have been accused of labor abuses or showed signs of possibly violating maritime law. Specifically, 16 ships either sailed with their mandatory safety transponders turned off, broadcast multiple electronic IDs or transmitted information that didn’t match its listed name or location — discrepancies that are often associated with illegal fishing, although the AP saw no evidence that they were engaged in illicit activity. Six ships were owned by companies accused of forced labor including one vessel, the Chang Tai 802, whose Indonesian crew said they had been stuck at sea for years.

2. The number of Chinese-flagged vessels dedicated to squid fishing in the south Pacific has surged 10-fold from 54 active vessels in 2009 to 557 in 2020, according to the South Pacific Regional Fisheries Management Organization, or SPRFMO, an inter-governmental group of 15 nations charged with ensuring sustainable fishing in the area. Meanwhile, the size of its catch has grown from 70,000 tons in 2009 to 358,000 last year. Critics say regional fishing management organizations that operate on the basis of consensus are powerless to block China from registering vessels with links to illegal fishing and abuse.

3. The Chinese fleet is able to fish for sometimes years at a time because they can offload their catch at sea into a network of giant refrigerated vessels, or reefers, capable of hauling more than 15,000 cubic meters of fish — enough to fill six Olympic-sized pools —to port. Giant tankers provide cheap fuel heavily subsidized by the Chinese government, adding to the environmental burden. The 12 reefers active in the Pacific this past July had at least 196 encounters with fishing vessels during that period, according to satellite data analyzed by Global Fishing Watch, a U.S.-based group that supports sustainable fishing.

This story is a joint project between The Associated Press and Spanish-language broadcaster Univision.