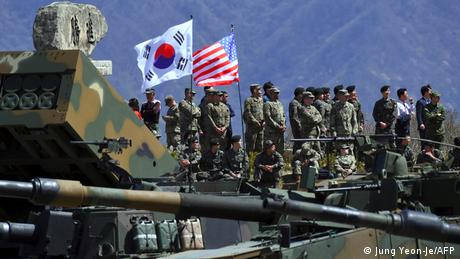 As the US bolsters its alliances to counter China throughout the Indo-Pacific region, medium-size regional powers are coming under growing pressure to choose a side.

South Korea has been militarily aligned with the United States since the 1950-53 Korean War, and is also deeply economically intertwined with neighbor China.

Analysts say Beijing is putting pressure on South Korea to move the US ally more closely into China's sphere of influence.

Chinese Foreign Minister Wang Yi arrived in Seoul on September 14 for a series of meetings with senior members of the South Korean government.

South Korean President Moon Jae-in had hoped the talks would focus on joint efforts to encourage North Korea to return to negotiations and, in the longer term, agree to decommission its nuclear weapons and dismantle its long-range ballistic missiles.

Wang, however, called for "mutual respect" of the two nations' interests, which was interpreted in South Korean media as a demand that Seoul overlook the actions of an increasingly assertive China.

In a later press conference, Wang was asked about South Korea's position in the US-China rivalry, to which he replied: "You should ask yourself whether you prefer the US or China," adding that China wants bilateral relations with South Korea to "develop further."

Wang also criticized the "Five Eyes" intelligence gathering alliance, which presently comprises the US, Great Britain, Canada, Australia and New Zealand. The US recently proposed the expansion of the alliance to include Japan, Germany, India, and South Korea.

"I think that is utterly a byproduct of the Cold War era that is already outdated," Wang said.

"Wang's comments are very direct, they go straight to China's core interests and they were delivered to the South Korean government and people," June Park, a political economist at George Washington University, told DW. "It was a threat and it has caused fear among Korean people," she added.

"Being a part of the Five Eyes intelligence alliance could be vital to South Korea's security, especially given the growing importance of the cyber realm, and it's important that all partners are on the same page and have access to the same information and trust each other," Park said.

China wary of US military in South Korea

South Korea has good reason to be concerned about how China could respond to tighter US-South Korea security ties, said Park.

The analyst said China was swift to retaliate when the US deployed the Terminal High-Altitude Area Defense (THAAD) weapons system in South Korea to defend against potential North Korean missile strikes.

Beijing objected strongly to the deployment, claiming that it compromised China's military capabilities. When Seoul declined to have the defensive batteries removed, Beijing retaliated by targeting the South Korean economy.

South Korean President Moon also knows the influence China has over North Korea, and the process of reconciliation with Pyongyang the president has poured much political capital into.

China chips away at US alliances

"South Korea is in a tough neighborhood," said Daniel Pinkston, a professor of international relations at the Seoul campus of Troy University.

"Korea's security perceptions are very much shaped by its history, its geography and geopolitical considerations, so it's a constant balancing act whoever is in government," he said.

"Seoul is very sensitive to the fact that it is in a difficult position and is very uncomfortable that it is being pressured to make a decision on which of the 'big powers' it should align with," he added.

"China's strategy here is clear. While the US and other like-minded countries are busy trying to integrate nations in the region into more formal alliances, China is doing whatever it can to frustrate that aim," the analyst said.

"China wants to peel away those countries and decouple them from US-led institutions. If Beijing can degrade those alliances and deal with countries on a bilateral basis, then it can use its immense economic power to greater effect," said Pinkston.