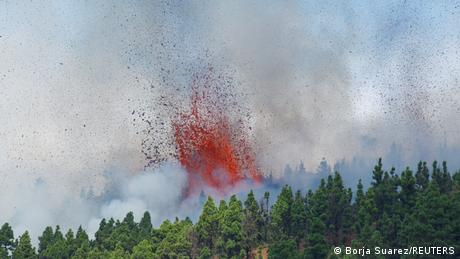 A volcano erupted Sunday on one of Spain's Canary Islands, after a week of heightened seismic activity.

The volcano is located on La Palma, the fifth-largest island in the Spanish archipelago that sits in the Atlantic Ocean off the western coast of Morocco.

Flights to and from the Canaries — which are popular with European tourists — were continuing as normal, airport operator Aena said.

Emergency services immediately began to evacuate residents, authorities said, having started moving those with reduced mobility earlier in the day.

"People are asked to be extremely careful and to stay away from the eruption zone to avoid needless risk," the government added.

Sunday's eruption follows a series of earth tremors this week, measured at 3.8-magnitude, whose vibrations were felt on the surface.

More than 22,000 tremors were recorded in the area — one of the most active volcanoes in the Canary Islands.

Spanish Prime Minister Pedro Sanchez said his government was monitoring the situation and state organizations were ready to support La Palma "in a coordinated manner."

Earlier this week, the government had raised the eruption alert level and instructed local residents to prepare light luggage with their mobile phones, important documents and any necessary medication in case of evacuation.

Itahiza Dominguez, head of seismology at Spain's National Geology Institute, told RTVC that it was too early to tell how long this eruption would last.

He added that prior "eruptions on the Canary Islands lasted weeks or even months."

The island of La Palma, one of several in the Canary Islands group, has around 83,000 residents.

Along with Tenerife, La Palma the most volcanically active of the islands.

Sunday's eruption is the eighth since records began and the first on La Palma since 1971.

The last eruption on any of the Canary Islands occurred underwater off the coast of El Hierro island in 2011. That event lasted five months.

Unlike the better-known islands of Gran Canaria, Fuerteventura, Lanzarote and Tenerife, La Palma is not a popular tourist destination.