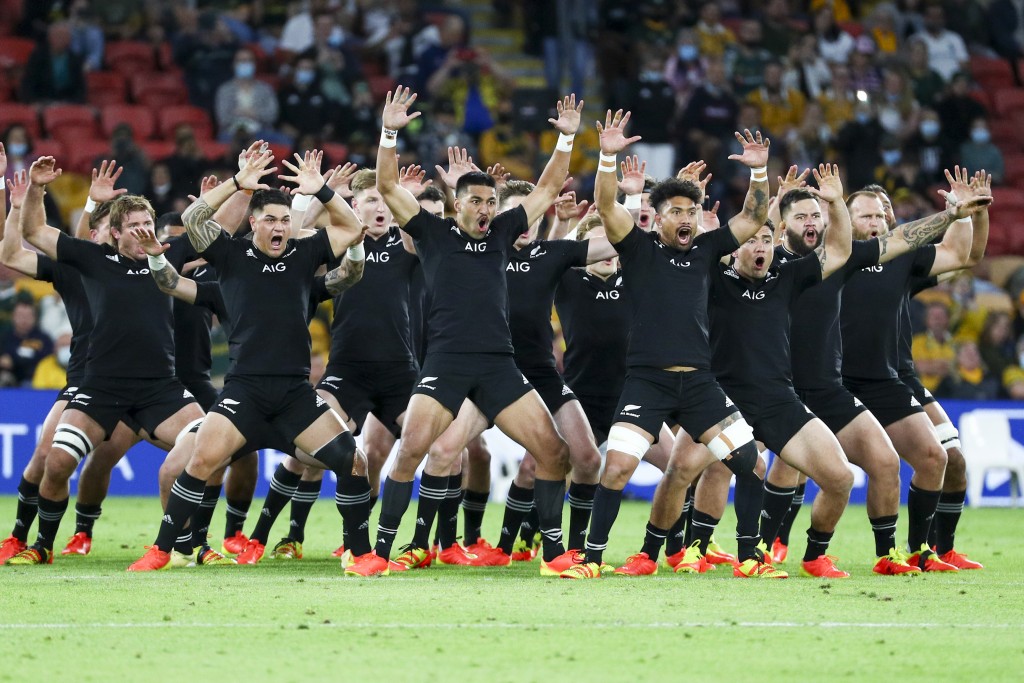 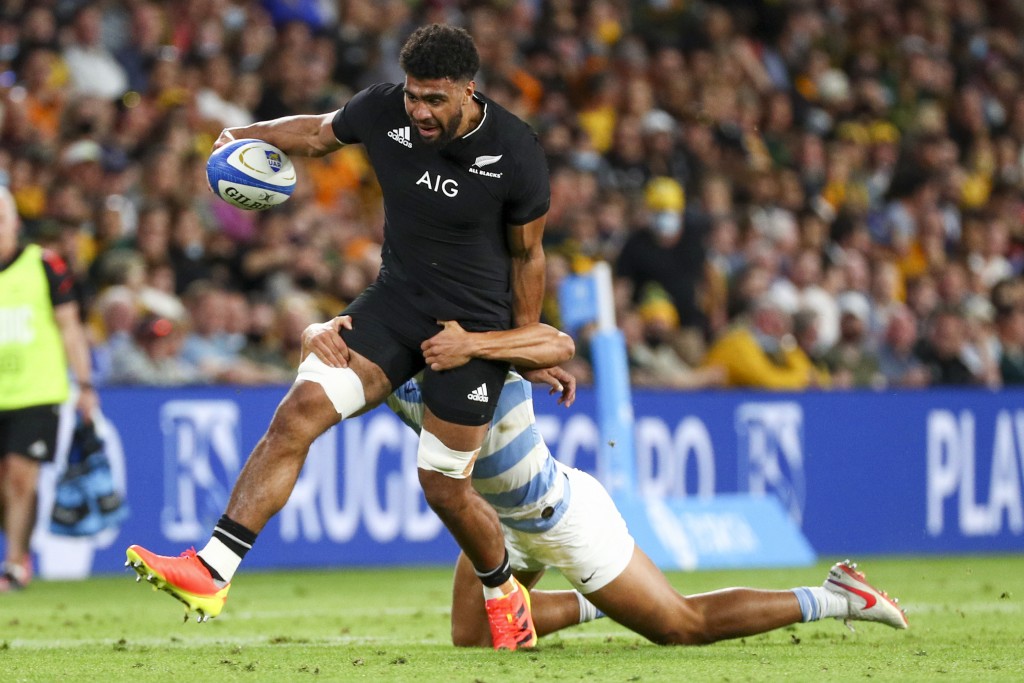 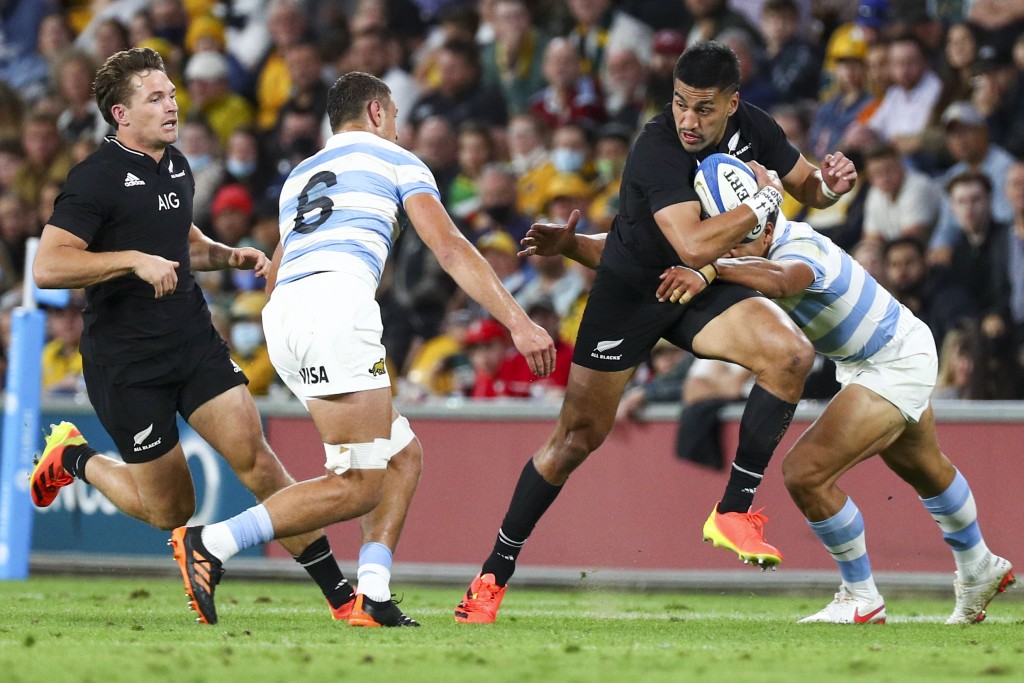 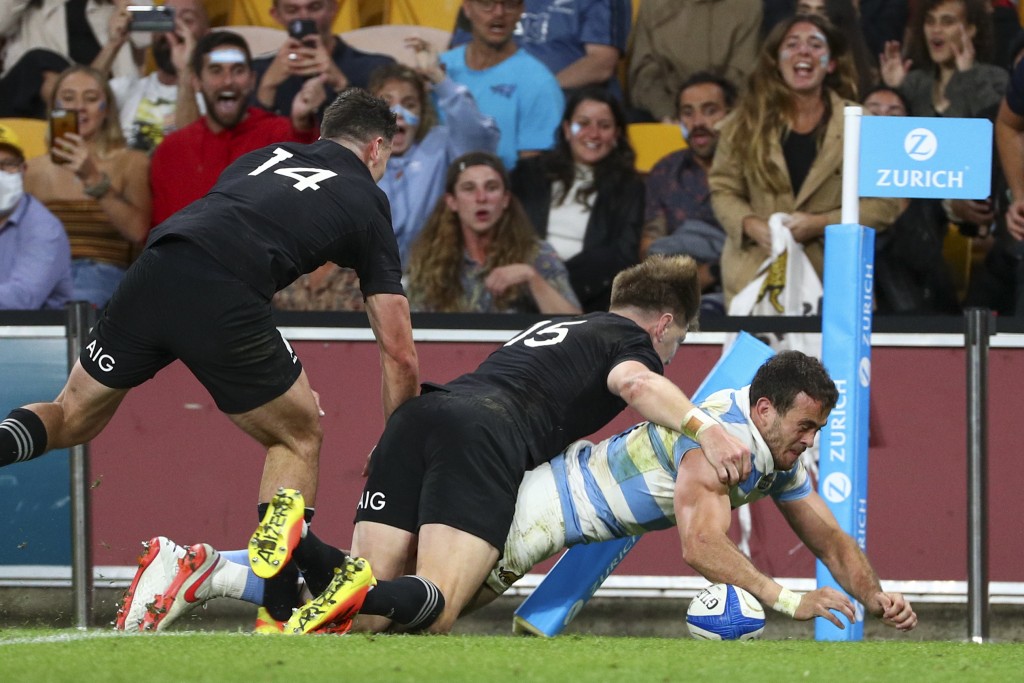 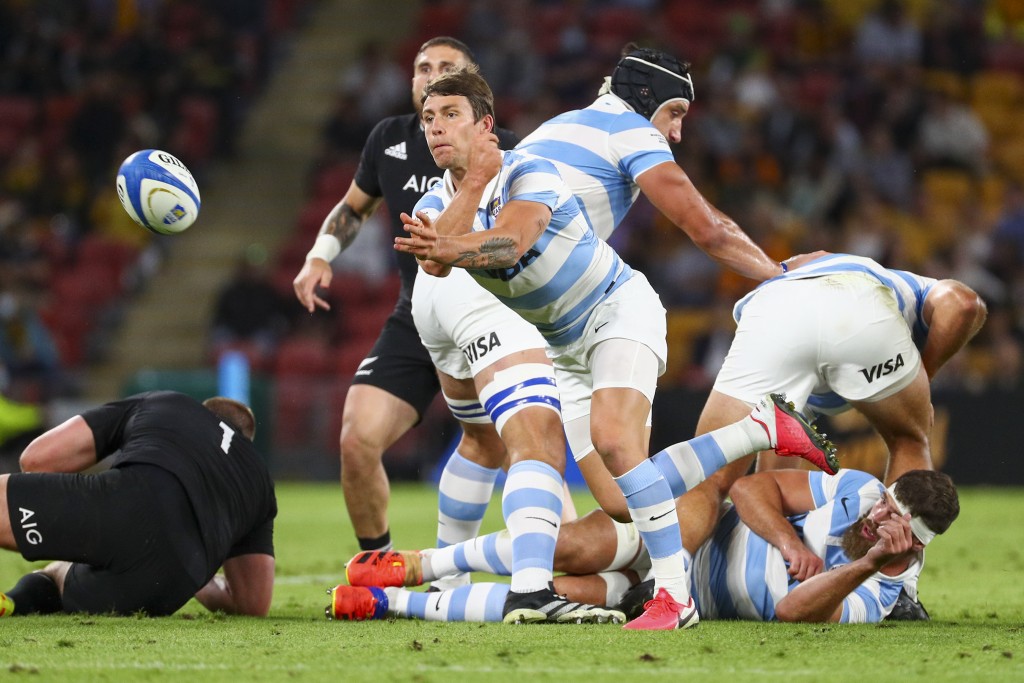 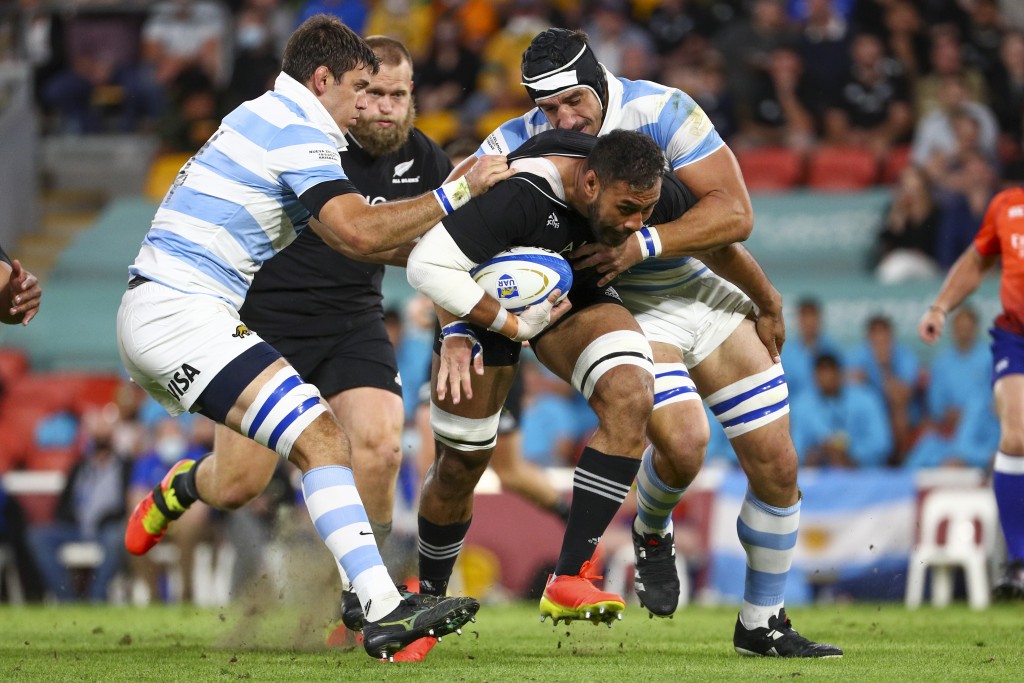 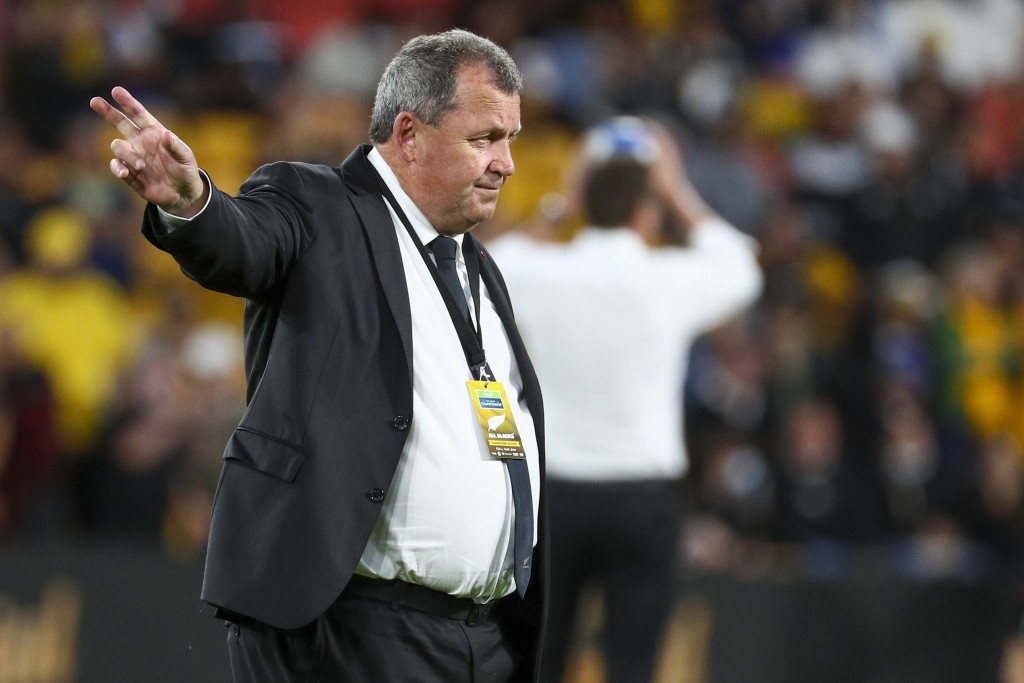 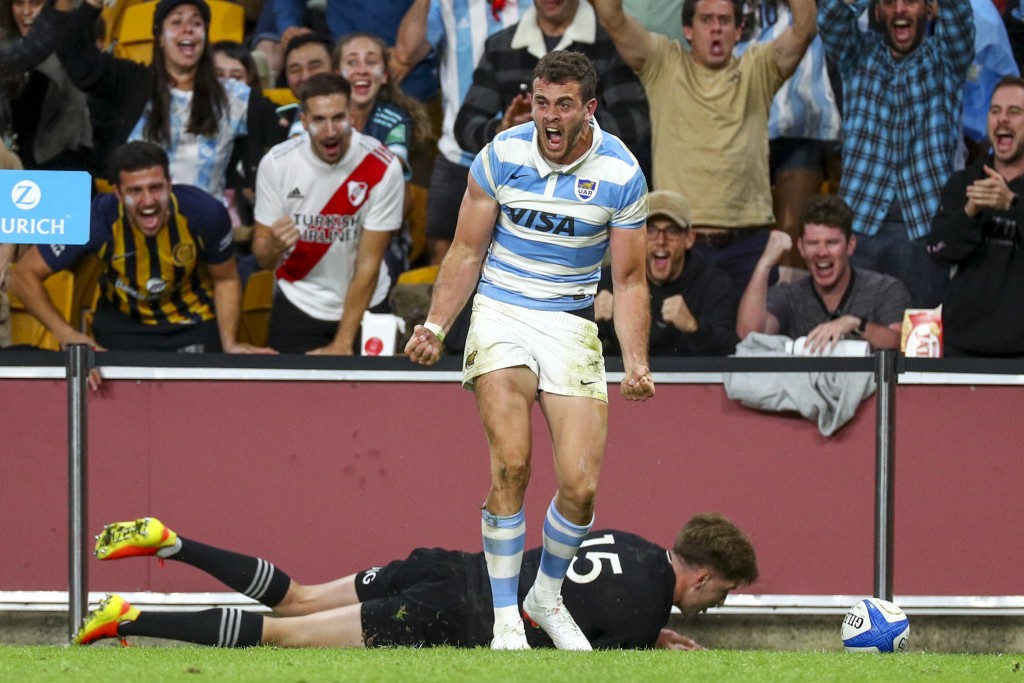 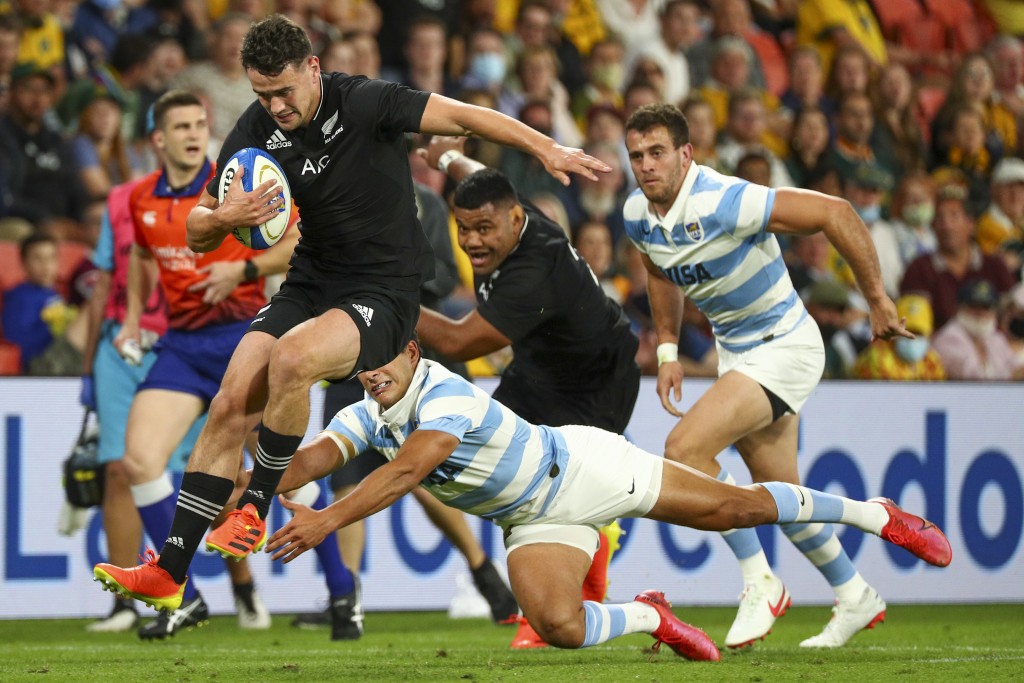 BRISBANE, Australia (AP) — Even with a reshuffled backline and an entirely new forward pack from the previous week, New Zealand had enough firepower to beat Argentina 36-13 to overtake South Africa atop the world rugby rankings in an ominous warm-up for the 100th test between the two nations.

The All Blacks needed to beat the Pumas by 15 points to regain the top ranking after Australia completed back-to-back wins over the World Cup champion Springboks with a 30-17 victory in the first match of Saturday's doubleheader at Brisbane’s Suncorp Stadium.

With 11 changes to the starting XV from last week’s 39-0 win over the Pumas, including regular fullback Damien McKenzie playing at flyhalf, New Zealand dominated early but had to wrestle hard in the second half before improving to 4-0 to lead the Rugby Championship and extending its winning streak to nine tests.

“Clearly we had a number of new combinations but ... delighted with the win,” All Blacks head coach Ian Foster said. “I keep harping on a bit, but every team is going to have to dig deep into their well over the next (two weeks) and the strategy of how we went into this game puts us in a pretty going place.”

Lock Patrick Tuipulotu, scrumhalf T.J. Perenara and Tupou Vaa’i — long after the halftime siren — scored tries and the New Zealanders led 24-3 at the break, despite having three tries disallowed.

It was 29-6 when hooker Samisoni Taukei’aho touched down in the right corner six minutes into the second half, but then Argentina rallied hard.

After the big loss on the Gold Coast last start, the Pumas played with more discipline and marshalled around flyhalf Santiago Carreras to work their way back to 29-13 in the 51st minute.

Winger Emiliano Boffelli caught a perfectly placed cross-field kick from Carreras and dived into the left corner for Argentina’s first try in two matches, then converted it from the sideline.

Argentina spent an extended period of time in the attacking quarter, applying all the pressure but unable to convert it into points, until the All Blacks finished off with a second try to Vaa'i three minutes from the end.

“Second half, we probably paid the price for missing a few opportunities and Argentina really grew through that. They came back really, really well,” Foster said. "That 10-15 minute spell toward the end, we showed great tenacity ... and it’ll hold us in good stead for what’s to come.”

Argentina is now 0-4 in the Rugby Championship ahead of next Saturday's test against Australia, which is 2-2 in the tournament.

Pumas coach Mario Ledesma praised the improvement in his squad, but said there needed to be a bigger lift if Argentina is to register a win in the tournament.

“Very proud of the effort and the commitment," Ledesma said. “Big jump from last weekend, but we still have to improve.”

The major focus next Saturday in the doubleheader in Townsville, in the north of Australia's Queensland state, is the All Blacks facing the Springboks.

Foster watched the first 50 minutes of the Australia-Springboks game and said it was “probably the first time that the South Africans have played with a team that plays with a lot of tempo in the last two years. They’ll learn a lot from that.”

He was expecting a typically “torrid” game to mark the century of tests between the All Blacks and Springboks.

“Trust me, we love playing test matches but we really love playing South Africa, probably because of the amount of respect we've got for them," Foster said. "Over history it's been an outstanding rivalry, so we're not so much talking about No. 1 and No. 2.

"We've got a chance to go to Townsville, play a foe we've got a lot of respect for, and put ourselves in a pretty nice position in this championship.”