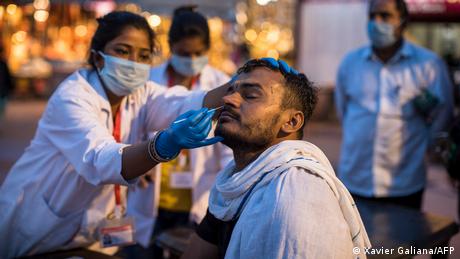 Indian officials are reporting a surge in the use of fake negative COVID-19 test reports across the country.

Last week, police from the eastern state of Odisha busted a racket in which fake PCR test reports were being provided to devotees who wanted to visit the auspicious Jagannath Puri temple. Police arrested 12 people, including the mastermind of the well-organized scheme.

The accused had illegally forged COVID test reports under the name of a hospital in the northeastern city of Puri, police said.

"Computers and other equipment have been seized. Clearly, it is a planned illegal scheme," Puri's Superintendent of Police Kanwar Vishal Singh told DW.

There have also been several incidents in which people have forged reports on their own, either to dodge quarantine rules or to travel freely without taking the PCR tests that several cities and states have made mandatory for entry.

Several arrests were made in the southern state of Kerala, which has also witnessed a spike in infections over the last two months. In two separate cases, police arrested seven people at the border checkpoint for using fake tests.

"We are investigating whether there is any link between the fake certificate creators and the agencies that are carrying out the swab tests on the borders," a senior police official said.

Many of the fake reports carry the labels of leading diagnostic labs and hospitals.

Over 100 tourists visiting hill stations like Mussoorie and Nainital have also been apprehended for carrying the fake certificates, as travel increases with the easing of restrictions.

During the famous Kumbh Mela religious congregation held in April, the Uttarakhand government authorized 11 private companies to carry out tests for devotees attending the festival.

However, investigations later revealed that over 100,000 tests were only carried out on paper, and not in reality. The Kumbh Mela became one of the most well-known superspreader events of the year.

In addition to domestic travel, the widespread use of fake test reports by Indians travelling abroad has alarmed health authorities in other countries.

This has led some airlines to only accept reports that have a Quick Response (QR) code embedded in them so that test results can be verified electronically.

However, organized gangs have managed to exploit the system by finding loopholes, due to the availability of PDF editors and QR code generators.

In most PCR test results, a scan of the QR code on the report just opens up a digital copy but does not authenticate the result.

Given the rampant forgery, several airlines have responded by asking the government to standardize all COVID-19 test certificates, similar to the vaccine certificates issued.

"There is a need to standardize these RT-PCR certificates. Although more people are getting vaccinated, we cannot undermine the efforts to combat the virus," Shally Awasthi, a pediatric pulmonologist at King George's Medical University in Lucknow, told DW.

In response, the government said it will soon link COVID tests to the Co-WIN application to make such certifications digitally accessible. With the new measure, it will be possible to verify whether someone has actually taken a PCR test or not by entering their phone number.

Co-WIN is an Indian government web portal for vaccine registrations, operated by the Ministry of Health and Family Welfare.

India has also reported a rise in the number of fake and unauthorized COVID vaccines and certificates, prompting authorities to regulate vaccination centers and crack down on organized syndicates.

Fake vaccination clinics were set up in the cities of Mumbai and Kolkata, where people were administered saline solution. Police in Mumbai discovered nine different fake clinics under just one syndicate. They also arrested 10 people, including two doctors at a private hospital.

Police arrested the kingpin, Debanjan Deb, in Kolkata. Deb had posed as a senior civil servant with a master's degree in genetics. Police also found that all of the vaccine vials, which had the Covishield and Covaxin labels on them, were actually containing the drug Amikacin, an antibiotic medication used to cure bacterial infections.

Despite efforts to put a lid on fake COVID tests and vaccine reports, some are skeptical over whether the proposed solutions will be long-lasting or viable.

"There is a major gap between the law and the procedure in our country. We have laws, but their implementation is pathetic. The same is likely to happen here," Vineeta Bal, a scientist at the National Institute of Immunology, told DW.